Phoenix Police Chief Jeri Williams and Sergeant Vince Lewis held a news conference on Wednesday to discuss why they want a couple charged with murder following the gunshot death of their 9-year-old boy. Ray Stern
The parents of a 9-year-old boy shot in his Phoenix home on Monday failed to call for help as they made "extensive" efforts to hide evidence, and should be charged with murder, police say.

Landen Lavarnia died on Tuesday afternoon at a local hospital.

Police reported on Monday that the boy's mother, Wendy Lavarnia, claimed that her 2-year-old picked up a 9mm handgun that was on the bed and fired it, striking his older brother in the head.

But at a news conference on Wednesday, officials said they're still investigating how the boy ended up shot.

"What we've learned through this investigation is that significant efforts were made to scrub the house clean and remove evidence while this young boy lay shot and dying," Phoenix Police Chief Jeri Williams said. "This investigation will continue until justice is ultimately brought about."

Cops arrived at the home at 3428 West Rosewood Avenue just before 3 p.m. on Monday following a report of a shooting. 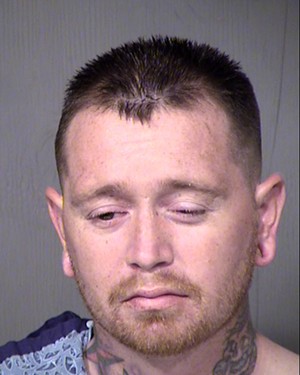 Kansas Lavarnia
Maricopa County Sheriff's Office
Lavarnia reportedly told detectives that the semiautomatic handgun, which doesn't have an external safety, was on the bed with her 2-year-old and 4-year-old son as the older boy played a video game.

The 2-year-old picked up the gun and fired one shot at his brother, she told cops. She claimed that she had allowed the toddler to "practice" dry-firing the weapon in the past.

Her 1-year-old daughter was also in the home at the time, but police aren't sure if she was in the bedroom.

Lavarnia also said that she immediately called 911 after the shooting and tried to resuscitate the boy until police and firefighters arrived two minutes later.

Firefighters reported to police that the boy's wound didn't contain as much blood as expected.

Police found Lavarnia's tale unbelievable based on evidence at the scene, and booked the woman initially on suspicion of four counts of child abuse.

His wife told police that he had not been home at the time of shooting.

The family had lived in the home about a year and had a "history of contact" with the state Department of Child Safety, police said.

At the news conference and in newly released court records, police described a chilling scene of callous parents who cared more about the trouble they were in than their boy's life.

About three hours after the shooting, Landen's father came home with a suspicious wound to his upper left arm. 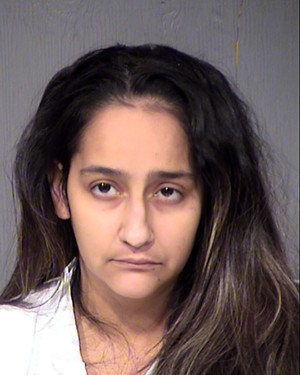 Wendy Lavarnia
Maricopa County Sheriff's Office
Police determined it was a gunshot wound that he hadn't inflicted himself.

"The wound was poorly bandaged with tissue paper and a distinct clear packing tape," according to a new booking sheet filed late Tuesday.

Around the wound were puncture marks in his skin believed to have been made by a flat-head screwdriver, possibly in an attempt to "camouflage" the gunshot wound, records state.

Wendy Lavarnia claimed he had not been wounded when he left the home to go shopping.

"Further investigation at the scene revealed that extensive efforts were made at the scene to clean up the scene and remove evidence," Sergeant Vince Lewis told reporters on Wednesday.

Police served a search warrant on the home after the shooting and tested different locations for blood. The tests revealed that a large amount of blood had been cleaned up in the home before Wendy Lavarnia called 911.

No wipes, towels, or cleaning products could be found, but police did find two empty cans of stain remover.

It all adds up to the idea that the Lavarnias took a significant amount of time and effort for the cleanup before help arrived, according to police.

Lewis could not answer whether the boy would have survived his injury if he had received care immediately, but said the delay was "critical."

"It definitely shocks the conscience," he said.

Lewis declined to speculate whether the father was shot by the same bullet that killed his son, or whether the 2-year-old boy was capable of firing the handgun.

Arizona law allows prosecutors to charge people with first-degree murder if someone dies in the commission of a crime, including child abuse.

"This investigation will continue until justice is ultimately brought about," Chief Williams said. "Until then, our hearts go out to the remaining family members, to the officers and firefighters and emergency personnel impacted by this, and to all of those folks who loved Landen."