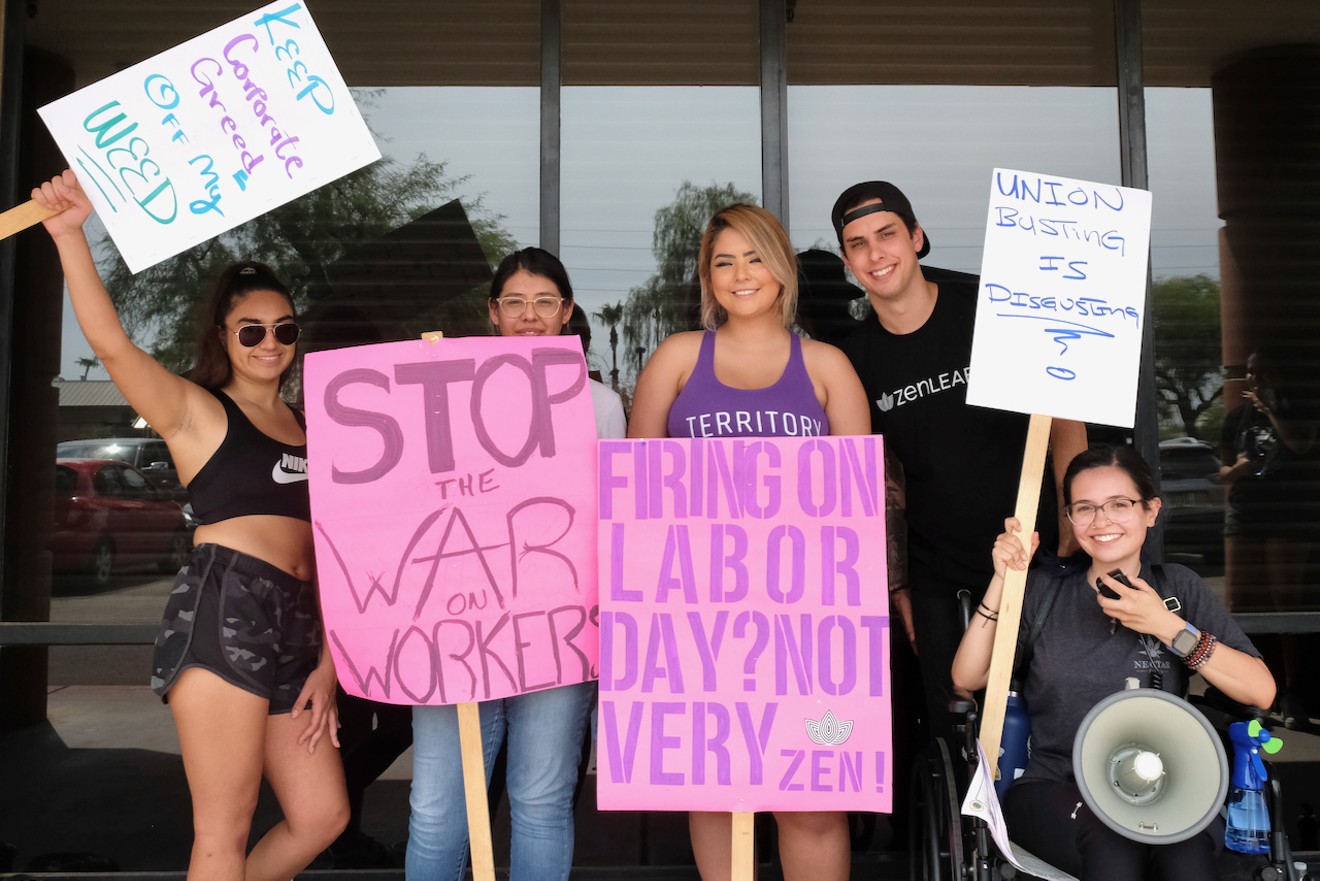 For months, Santoyo, a team lead at the dispensary, was outspoken about a new union drive and a critic of the dispensary's poor wages and other policies. She was fired last week after a supervisor claimed she violated company policy.

But Santoyo said it was retaliation.

Santoyo was among a dozen cannabis workers and supporters who gathered outside Zen Leaf on West Chandler Boulevard on Thursday afternoon, hoisting signs and bullhorns to protest what they said is a series of retaliatory terminations at the dispensary.

This year, dispensaries across the Phoenix area have seen a rush of union activity. No dispensary workers in the state were unionized until this summer, when a Curaleaf location in midtown voted to unionize — two years after a Curaleaf worker in Gilbert, Anissa Keane, was fired for attempting to start a union at her dispensary.

In July, weeks after the midtown Curaleaf voted, the Chandler Zen Leaf held its own union election. Staff voted 20-2 to unionize.

The early successes of unions so far in the cannabis industry in Arizona are largely due to a campaign by United Food and Commercial Workers, a national labor union, and its launch of a national cannabis organizing campaign. Members of the local offshoot, Arizona Cannabis Workers Rising, attended Thursday's rally.

Although the Chandler Zen Leaf now officially has a union, it faces multiple National Labor Relations Board investigations into its conduct before and after the union drive. There are four open NLRB cases involving the dispensary concerning allegations of retaliation, threats, and discipline of employees for union activity.

Over the course of the union drive, 10 employees at the Chandler location were terminated by Zen Leaf, according to workers at the store.

The company said the terminations were not related to labor organizing.

"Zen Leaf does not terminate employees for union activity. We respect our team members' right to choose whether to be represented by a union," Steve Mazeika, director of communications for Zen Leaf's parent company, Chicago-based Verano Holdings, said in a statement to Phoenix New Times.

He added that the company was focused on "helping unlock the benefits of safe, legal access to regulated cannabis for medical patients, society, and team members." 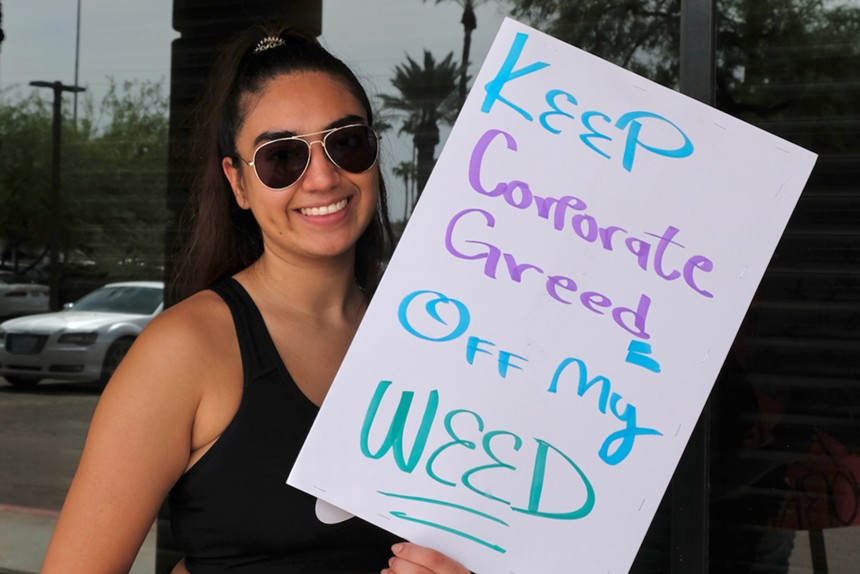 About a dozen cannabis workers and supporters protested outside Zen Leaf in Chandler on Thursday.
Katya Schwenk

'It Takes a Mental Toll on You'

Santoyo said that on Monday, she and several other coworkers were fired after a supervisor claimed that they had been under the influence at work. Santoyo denied the allegation and said the company provided her no evidence, aside from the supervisor's claims, that this occurred. She said the company tried to prevent a union representative from attending the meeting in which she was fired.

UFCW organizer Mario Gonzalez, who was present at the meeting, confirmed this account to New Times. He said that the union has filed unfair labor practice charges against Zen Leaf over the terminations.

"It's been a frustrating ride," Santoyo said. She had been a supporter of the union and of changes at the dispensary, but she also cared deeply about her job, she explained. "We love our job. We love our patients. We're here to educate people, to help people feel better."

Other workers provided New Times with accounts of their own experiences at Zen Leaf that drove them to show up at the protest on Thursday.

Former budtender Lilian Bernal said she was fired in June for arriving at work six minutes late. She was the first one fired during the course of the union drive.

"They started with me to target because I was very vocal about unionizing," she said.

Bernal's main concern — shared by several of her coworkers — was that after Verano acquired the dispensary, budtenders' tips began to be pooled. Instead of allowing budtenders to keep most of their own tips, the tips were now shared among management and back-of-house staff.

Bernal said her earnings from a 12-hour shift dropped by as much as $200 — all so the company could "make up for the lack of pay that they should be giving [other staff]."

"I love this store, and I'm very loyal to it and my customers," Bernal said. But with a 30-minute commute, the sudden drop in earnings was difficult. "It's hard to do that if you don't have enough gas to get to work."

Another worker, Brianna Martinez, said she was frustrated by the lack of disability accommodations she experienced at the store. Martinez, who said she suffered from post-COVID-19 complications, is currently on medical leave. But while she was worked as a budtender, she was barred from using a wheelchair that was sitting empty at the store, she said.

"It takes a mental toll on you," she said. "Not getting the support from upper management or from corporate, it's a slap in the face."

The NLRB investigations into the dispensary are still in their early stages. But workers said Thursday that it was important to show up to support their coworkers and demonstrate the value of their jobs.

Santoyo said that when Verano added the Chandler dispensary to its portfolio of more than 75 dispensaries around the country, she felt that the company was trying to make the dispensary "like a Target" — customers come in, get their pot, and get out. This frustrated her and her coworkers.

"We have patients," Santoyo said. "We're not just cashiers. We're more than that."
KEEP PHOENIX NEW TIMES FREE... Since we started Phoenix New Times, it has been defined as the free, independent voice of Phoenix, and we'd like to keep it that way. With local media under siege, it's more important than ever for us to rally support behind funding our local journalism. You can help by participating in our "I Support" program, allowing us to keep offering readers access to our incisive coverage of local news, food and culture with no paywalls.
Make a one-time donation today for as little as $1.