Joseph Flaherty
One day after the Phoenix Police Department arrested at least three people at a homeless camp downtown, a team from the street transportation department was busy removing any signs that the camp ever existed.

By a little after noon, there was hardly anything left to suggest that a dozen or so individuals had been sleeping at a small median on Roosevelt and Third streets just a few days earlier. City officials and advocates descended on the park this week to remove the people living there after concluding that it violated an ordinance.

Phoenix Police Sergeant Matt Butler and two other officers stood by on Friday as a group of workers on the scene picked up trash, raked mulch back into position, and doused the benches with a disinfectant spray. The traffic island where the encampment had grown over December has a metallic sculpture, "Shadow Play."

The city said that because of the median's location as a site for underground utilities, the camp was in violation of an ordinance prohibiting urban camping on city property and right-of-ways.

It sits next to high-end apartment buildings that rent for $1,200 per month and is across the street from a sleek coffee bar.


City clears out what was left of a homeless encampment at Roosevelt St. and 3rd St. The park and sculpture is next door to high-end apartments that go for $1,200. pic.twitter.com/2epKmt0stO

Phoenix spokesperson Tamra Ingersoll wrote in an email, "A cleaning occurred as part of routine preparations in advance of First Friday, around noon."

In a January 3 statement, the city said that homeless outreach team members with PHX C.A.R.E.S. were monitoring the situation and connecting individuals at the site to services.

“Those teams have made numerous contacts and some people have chosen to accept the city’s offer for assistance," the statement read. "The city continues to evaluate the situation for next steps, including the placement of signs as part of our education and outreach that let the public know camping is not allowed. The signs are expected to be installed within the next several days.”

The city also said that neighbors brought the encampment to the city's attention and raised concerns about "unsanitary conditions."

As the workers cleaned up, several advocates for the homeless were attempting to locate the individuals who
click to enlarge

Krysten Aldridge
had previously been living in the camp, searching a nearby church with no success.

"A lot of the folks out here are disheartened, and the trust factor is gone," said Krysten Aldridge, co-founder of One True Love, a food truck service that serves homeless individuals.

Aldridge said that she can see the city's position. "I understand if folks are existing against an ordinance. That's all well, but approach them with compassion," she said.

The city had warned people living in the camp that they would have to leave and sent social-services workers to the site. But even late on Wednesday, individuals were still in the park area. Advocates expressed concern about the arrests that took place on Thursday morning.
click to enlarge 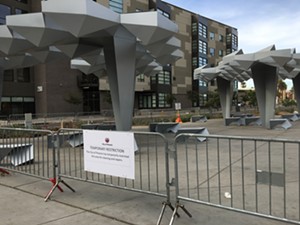 The city has closed off the area temporarily for "cleaning and repairs."
Joseph Flaherty

"Yesterday, it was handled completely poorly," said Kara Hughes, who runs the Relentless Life Project. Phoenix police told the Republic that the arrests were part of an investigation unrelated to the encampment.

Update, January 6: The median now has signs which cite the ordinance prohibiting "camping, lying, or sleeping."

Update, January 7: A city spokesperson said the area will remain surrounded by a barricade as a temporary measure for  "cleaning and repairs." The no camping signs will be permanent.