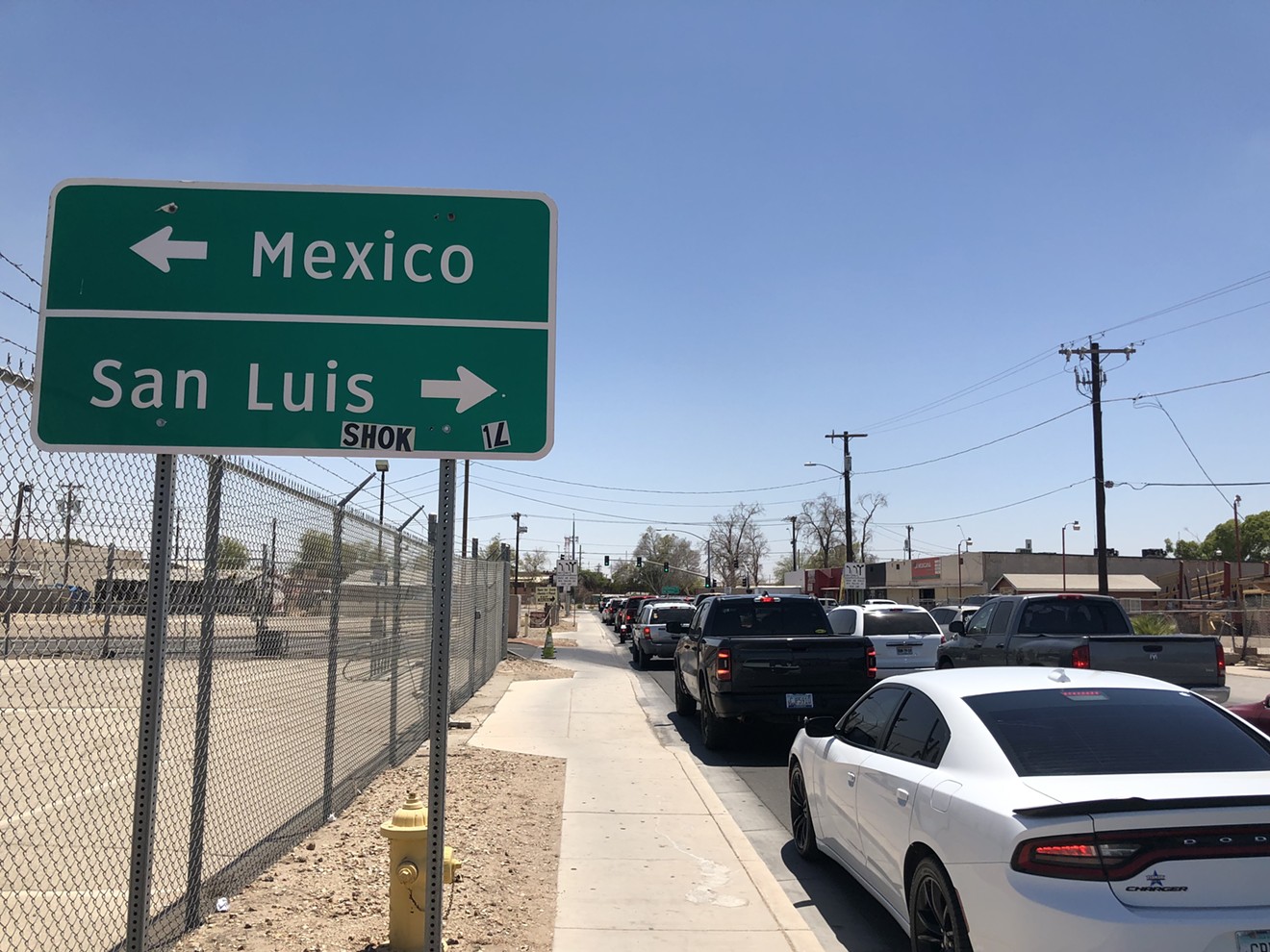 Cars waiting outside the San Luis Port of Entry in San Luis, Arizona. Hannah Critchfield
On a blanched mid-July morning, Juana and Mario Feliz climbed into their well-worn pickup truck just south of the international line between Sonora, Mexico, and Arizona, and took the 10-minute journey across the border to buy a gallon of milk. It would take them three hours to get home.

The Feliz family, aged 59 and 58, were two of many who found their bi-national routine disrupted on Monday by a temporary shutdown of the Port of San Luis, located about 40 miles outside Yuma.

Juana and Mario Feliz, 59 and 58, residents of San Luis Río Colorado, Sonora.
Hannah Critchfield
U.S. Customs and Border Protection suspended operations at the port of entry near Yuma late Monday morning. Reports of the border's closure from stranded drivers circulated as early as 10:50 a.m. on social media. CBP announced on Twitter at about noon that the closure was in response to a “public security concern," which was later revealed to be an alleged bomb threat.

By then, cars piled back as far as a half-mile from the port, which connects San Luis, Arizona, and San Luis Río Colorado, Sonora. The Felizes told a Phoenix New Times reporter in Spanish that it was the first time they'd had trouble crossing through the port.

San Luis Police Department announced the closure on their Facebook page at 10:50 am.
Facebook
By 1:23 p.m., Officer Benjamin Gomez of the San Luis Police Department confirmed on the scene that law enforcement received word of a bomb threat, but that the threat appeared to be unsubstantiated. They reopened the port to pedestrian traffic and began letting 10 cars at a time cross the border into and out of Mexico.

Cars backed up at the San Luis Port of Entry in San Luis, Arizona.
Hannah Critchfield
In all, the closure and subsequent pileup lasted only a few hours, but it was little comfort to the stranded crossers who sat in line, the 111-degree sun radiating through their front windows.

Jesus Gil, 33, works as a framer in Mexico and regularly crosses the border to and from Arizona. He sat with his windows rolled down — his air-conditioner had begun to stall after his car lingered in one place for so long. He waited toward the front of the line for an hour, wooden construction planks in the passenger seat beside him, just a few feet between the stoplight and the checkpoint that separate the two countries.

Jesus Gil, 33, works in the construction industry in Mexico.
Hannah Critchfield
For Raul Vegara, 50, this was nothing to sweat over — he’d been crossing the border seven days a week for the last eight years, he said. He works for Diazteca Group, the produce company, and said he's experienced closures at the border twice before. He sat for about 50 minutes, and was confident the bomb was just a rumor.

Raul Vegara, 50, a resident of Sonora who crosses the border into Arizona for work daily.
Hannah Critchfield
The Port of San Luis has been a busy commercial port of entry since the 1990s, but also regularly attracts individuals and families, with almost 6 million personal vehicle passenger crossings last year, according to U.S. Bureau of Transportation data. For instance, co-workers at San Luis’s famous Mariscos El Navegante restaurant said they were planning to cross into Sonora after their shift for a poolside party, where their boss was going to prepare carne asada.

In a time when the border between the United States and Mexico feels particularly pronounced, the closure of the San Luis Port of Entry serves as a reminder that daily life on both sides depends on its permeability.

The Port of San Luis was fully open, and the backup dissipated, by 2:30 p.m.
KEEP PHOENIX NEW TIMES FREE... Since we started Phoenix New Times, it has been defined as the free, independent voice of Phoenix, and we'd like to keep it that way. With local media under siege, it's more important than ever for us to rally support behind funding our local journalism. You can help by participating in our "I Support" program, allowing us to keep offering readers access to our incisive coverage of local news, food and culture with no paywalls.
Make a one-time donation today for as little as $1.
Hannah Critchfield was an editorial fellow for Phoenix New Times starting in 2019.