What's Behind the Funding Shakeup at the Phoenix Police Academy? 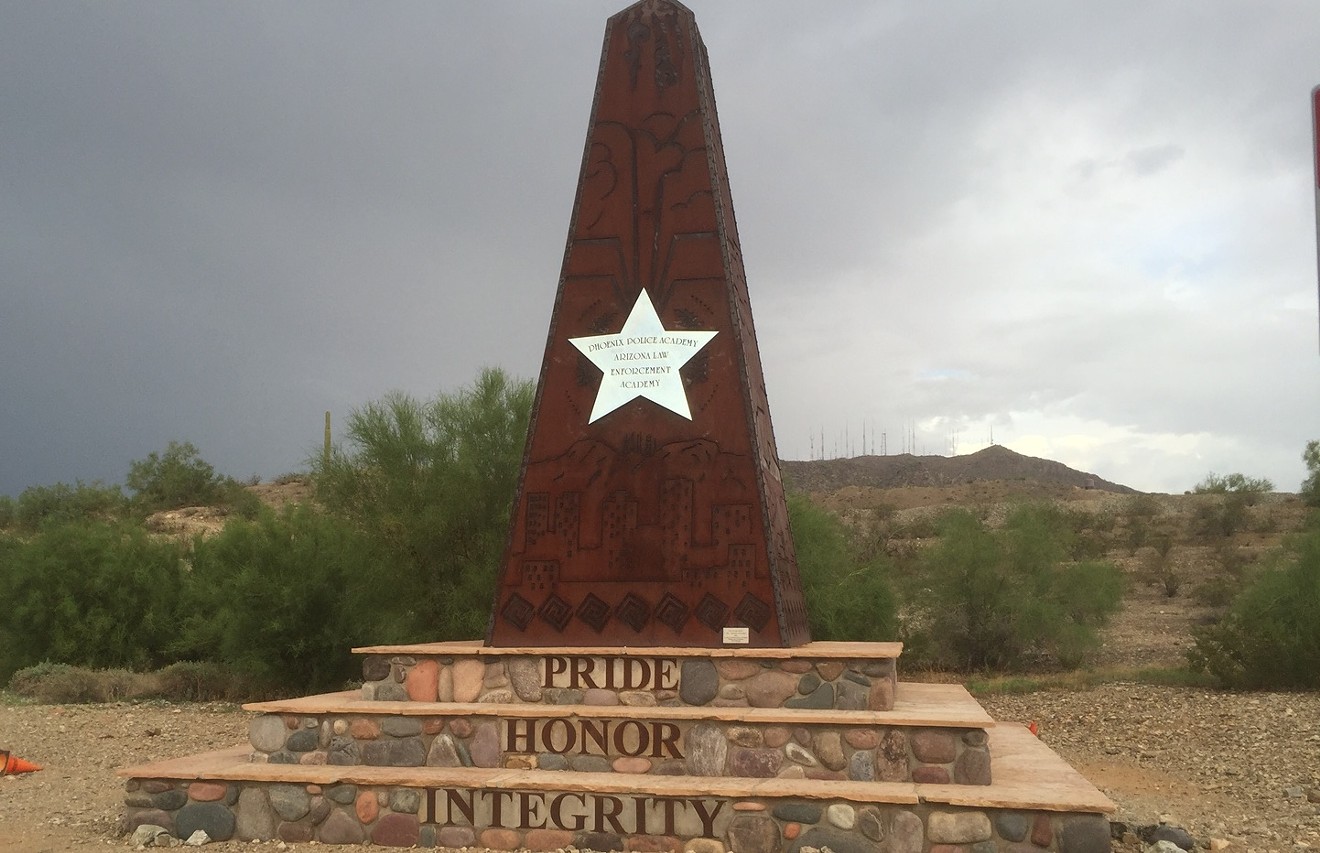 The Arizona Peace Officer Standards and Training Board, also known as AZPOST, sets standards of recruitment, retention, and training for prospective law enforcement and correctional officers. AZPOST also funds a dozen police academies, including one in Phoenix.

However, the training board has hit a financial rough patch recently.

Arizona law enforcement agencies insist the board's budget woes won't affect recruits. But it's not every day that an inter-governmental agreement falls apart after nearly 20 years, signaling changes for the agencies that sponsor commanders and instructors at the Phoenix academy.

Moreover, the back-and-forth over who should pay for the Phoenix academy comes at the exact moment when many law enforcement agencies are actively recruiting and hiring. An unusually large class of 400 recruits came through the Phoenix academy last year, according to a spokesperson.

Mark Perkovich, audit and compliance manager at AZPOST, told Phoenix New Times that funding for the board has declined by about 32 percent over the last nine years. This led to trouble financing the Phoenix police academy with the training board’s agency partners — one of AZPOST's main obligations.

“AZPOST had taken steps to cut costs in a number of areas, looking secondarily at how the police training fund was managed,” Perkovich said.

According to Perkovich, AZPOST Executive Director Jack Lane identified the board’s sponsorship of a training commander and two administrators in Phoenix as a funding gap.

At a meeting last month, Lane broached the subject with the Phoenix Police Department and the Arizona Department of Public Safety; along with AZPOST, these agencies comprise a triad that funds the Phoenix academy.

As a result of the discussion, on July 17, the Phoenix Police Department notified its partners that the department was withdrawing from the inter-governmental training agreement, ending a funding arrangement that had been in place since 1999.

Last year, nearly 200 new Phoenix police recruits graduated from the Phoenix academy, along with 54 DPS officers and 157 others, Howard said.

Nevertheless, a budget gap for the training agency could have implications for Arizona law enforcement, broadly speaking.

“The [inter-governmental agreement] is no longer in existence, but it’s not easy to turn off that financial faucet, if you will,” Perkovich said.

Because of the sudden withdrawal of Phoenix Police, the agencies are currently reviewing a provisional agreement to get through the rest of 2017. A draft proposal would have AZPOST provide $200,000 for equipment and facility funding for the Phoenix academy.

Part of the problem is that AZPOST is funded exclusively by a fund within the Arizona Criminal Justice Commission. As the commission reduced the budget for AZPOST over the last decade, the training board had no choice but to look for places to cut costs. It landed on the agreement to fund staff at the Phoenix academy.

A spokesperson for the Arizona Department of Public Safety said the agency is nonplussed by the funding reshuffle.

DPS information officer Quentin Mehr told New Times in an email, “It will not affect our budget. We don’t believe it will affect our ability to hire and train recruits. We don’t expect it to cost us more as an agency. We will still be sending recruits to 7th Ave and Dobbins,” the site of the Phoenix academy.

However, the academy budget discussions raise questions about what other chain reactions could be set off by belt-tightening at the agency that effectively sets the stage for people entering Arizona’s law enforcement community.

Perkovich said a motivating question at last month’s meeting was whether the academy in Phoenix “has outlived its life expectancy.”

Phoenix police officers at a rally in 2010. The state board that oversees standards and training can no longer meet a funding agreement for the Phoenix police academy.
lungstruck/Flickr
Other agencies, he added, are often staring down the same budgetary issues that AZPOST has been dealt. Questions of manpower at training academies often come up; after all, providing commanders and sergeants can be expensive. It also takes a full-time employee away from their local law enforcement office.

“How do we deliver the highest level of standard in basic training if we don’t have enough of the well-qualified certified staff to instruct and lead those training?” Perkovich asked.

The decision to end the funding agreement for the Phoenix police academy comes as the department aggressively recruits new officers. Law enforcement agencies across the state are trying to rebuild within their ranks in the wake of a hiring freeze instituted during the recession and an ongoing wave of officer retirements.

When asked if there is indeed a ripple effect because of AZPOST's budget decline, Howard said the Phoenix Police Department is unconcerned.

“The standards are set and the actual training can not and will not be lowered due to budgetary constraints of any particular group,” he wrote. “The agencies who use the academy are committed to continuing the highest level of training and will work together in the future to ensure this does not change.”