Three years after a sergeant's bigoted Facebook posts helped spark a scandal in the Phoenix Police Department, an appeals court has allowed his lawsuit against the city, which alleges First Amendment violations, to move forward.

In 2013 and 2014, current Phoenix police sergeant Juan Hernandez shared a multitude of offensive memes on his personal Facebook page. "The most common name for a convicted gang rapist in England is Muhammad," one of the posts read. "These gangs are not comprised of 'Asians'; they are Muslims." Another post — titled "Recent Contributions to Science By Islam" — mocked Islam and Muslim people.

Hernandez's posts went unnoticed until 2019. That's when the Plain View Project published more than 5,000 Facebook posts shared by police officers around the country. The researchers spent two years combing through social media feeds of current and former cops looking for posts that might "undermine public trust and confidence in police."

Hernandez was one of 97 current and former officers in the Phoenix Police Department who had their offensive post included in the project.

The database included 282 posts from Phoenix officers. Some of the posts were shocking: One featured a truck covered in blood, captioned "Just drove through Ferguson. Didn't see any problems," referencing the protests in Ferguson, Missouri, over the death of Black teenager Michael Brown.
click to enlarge

One of the bigoted Facebook memes posted by current Phoenix police sergeant Juan Hernandez.
Court records
Another, posted by former Phoenix officer James Wolfenden, claimed that Black Lives Matter was a "domestic terror group" that was "funded by Hamas," the Palestinian militant organization.

An investigation by Phoenix New Times found that 11 of the Phoenix officers in the database had been accused of killing or seriously injuring someone. Others, including Hernandez, were on the Brady List, a registry of officers with integrity issues that county prosecutors must disclose to defense attorneys in court proceedings.

At the time, police chief Jeri Williams called the posts "embarrassing and disturbing" and said the department's internal affairs bureau would launch an investigation.

Investigators interviewed Hernandez in June 2019, inquiring specifically about four of his posts relating to Islam. Hernandez explained, according to court records, that he had shared the posts in order to "drive discussion about issues that were in the news at the time." But the bureau found that Hernandez had “potentially reduced or contributed to the erosion of public trust ... and created dissension in the community by promoting hate, violence, racism, or bias."

The sergeant faced potential termination due to the bureau's findings. But before the agency could take action against him, Hernandez sued — alleging that his right to free speech was being violated and that the discipline amounted to retaliation. As the lawsuit progressed, the city dished out a 40-hour suspension, which Hernandez served, according to his attorney Steve Serbalik. The ongoing lawsuit challenges the basis for the suspension, Serbalik added.

His complaint also claimed that the city's social media policy — which included restrictions on any activity that "cause embarrassment to or discredit" the the agency — was unconstitutionally broad. 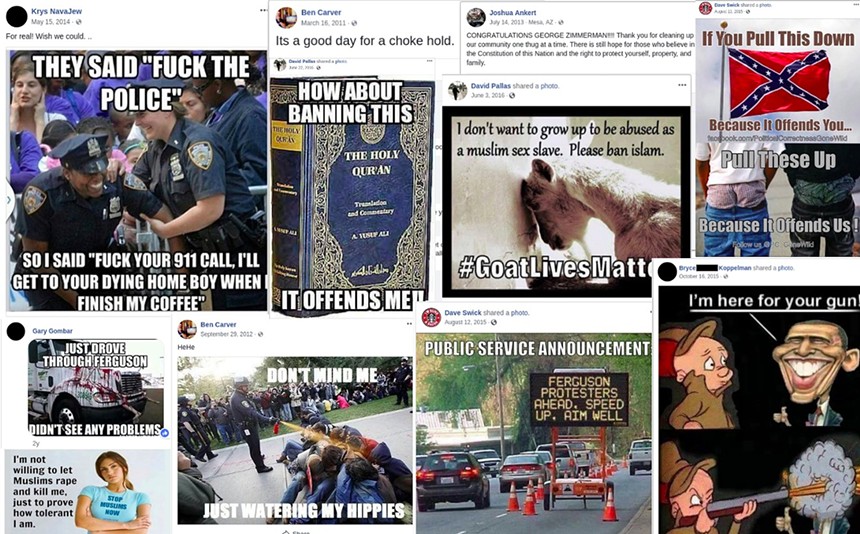 Facebook posts by Phoenix officers spotlighted in a database by the Plain View Project in 2019.
via Facebook

Free Speech — Despite the Bigotry

On August 5, the Ninth U.S. Circuit Court of Appeals revived Hernandez's lawsuit, after it was dismissed by a lower court. The appeals court found that Hernandez's posts met the criteria under the First Amendment for free speech — despite the bigotry.

"Its distasteful character alone does not strip it of all First Amendment protection," Judge Paul Watford wrote in the 30-page decision. The posts were related enough to "matters of public concern" that they were afforded some constitutional protections, according to the ruling.

That doesn't mean that the case is closed, however. Watford wrote that the lower court had been wrong in dismissing the case early on. Now that it has been revived, the city will get a chance to make a more extensive argument for why it intends to take disciplinary action against Hernandez. That argument could still succeed.

"Needless to say, Hernandez's Facebook posts occupy a much lower rung on the First Amendment hierarchy" than the speech of, say, government whistleblowers, Watford explained.


Serbalik, the lead attorney for Hernandez and a Scottsdale lawyer who commonly represents Arizona law enforcement, applauded last week's ruling. "The important takeaway is that officers do have constitutional rights to free speech off duty," he said in a YouTube video. He added that the case also proved that overly broad social media policies in law enforcement can "face legitimate constitutional challenges."


The Phoenix Police Sergeants and Lieutenants Association, which represents the department's higher-ups, is supporting Hernandez in his lawsuit. "He is seeking to protect his First Amendment rights related to off-duty conduct," PPSLA President Ben Leuschner said. "We are pleased that the Ninth Circuit recognized the importance of the First Amendment and its application for police officers."


Hernandez's case will now return to the U.S. District Court for Arizona. Hernandez remains a sergeant on the force with a salary of nearly $110,000 a year, according to public salary records.
KEEP PHOENIX NEW TIMES FREE... Since we started Phoenix New Times, it has been defined as the free, independent voice of Phoenix, and we'd like to keep it that way. With local media under siege, it's more important than ever for us to rally support behind funding our local journalism. You can help by participating in our "I Support" program, allowing us to keep offering readers access to our incisive coverage of local news, food and culture with no paywalls.
Make a one-time donation today for as little as $1.