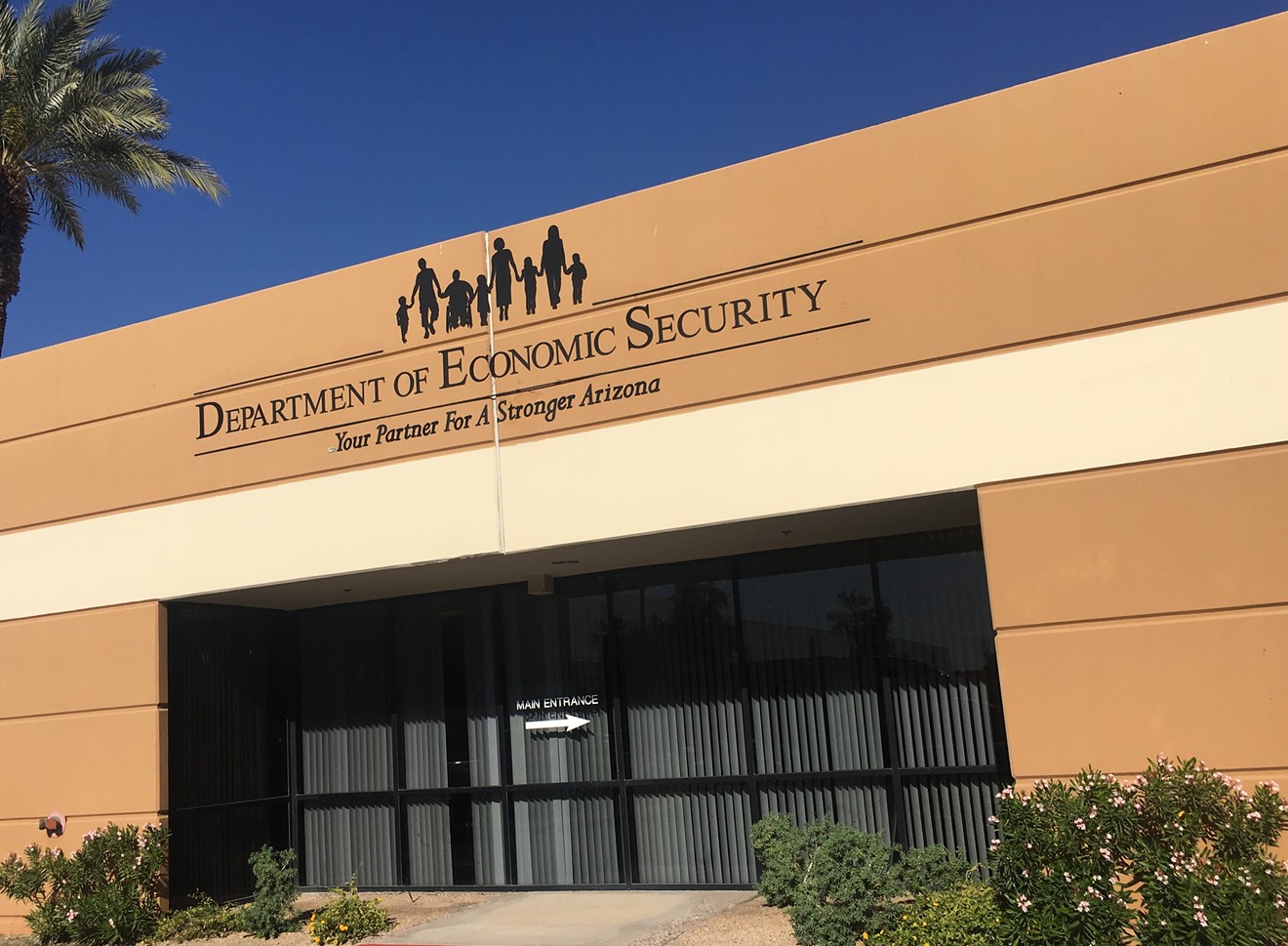 On her first day of work, Kimberly Spitler was handed the lives of 84 people. Spitler was no stranger to working with people with developmental disabilities, but as a former behavioral health advocate within the Arizona public schools, she knew providing adequate care took time. Is this possible? Spitler remembers thinking.

During the late hours she’d spend away from her family over the next three years, Spitler learned all too well it was no mistake. It was her caseload from her new employer, the state of Arizona.

Spitler, who's 48, is just one of a group of state developmental disability case workers who say their burgeoning caseloads have cost them much, and compensated them little. Now, Spitler is suing the state of Arizona on behalf of herself and all other people who are similarly situated for unlawfully failing to pay overtime wages.

“A lot of people don't have the funds to pursue a case on their own,” she said. “Or, they're so busy working their job that they just can't.”

The complaint filed on June 25 asks the court to recognize that the state has unjustly profited by denying its employees pay, violating the federal Fair Labor Standards Act and Arizona Wage Statute, which both mandate overtime pay for hourly employees. It alleges that wage theft was willful, interfered with caseworkers' lives, and impeded long-term investment in an agency that serves some of the state's most vulnerable citizens.

Spitler started her job as an hourly caseworker with the Developmental Disabilities Division (DDD) of Arizona’s Department of Economic Security in November 2017. The division provides a range of health care to developmentally disabled adults and children under the Arizona Long Term Care System, an Arizona Medicaid program that works to provide affordable care to disabled individuals.

Like her coworkers, Spitler works with people of all ages who have autism, cerebral palsy, epilepsy, or cognitive or intellectual disabilities — including children under the age of 6 who are at risk of developing a disability.

Case workers who aid individuals with developmental disabilities in Arizona, commonly referred to as "support coordinators," are paid hourly. They’re full-time employees, entitled to 40 hours of work and overtime pay for any hours worked beyond that.

Spitler said the problem arises with case assignments: Case managers employed by the DDD are not supposed to have a caseload larger than 40 clients at a time, according to the Arizona Health Care Cost Containment System’s (AHCCCS) Medical Policy Manual. But Spitler alleges she and other caseworkers regularly have more than 80 clients at once.

“The responsibility that we have for the people that we're serving, it's important to us — none of us want to drop the ball, so we do what we have to do,” Spitler said. “But we've just been very short-staffed for quite a long time.”

Spitler’s particular unit at the DDD could hire up to eight caseworkers. She said that since she started, the most they’ve ever had is five. Amidst these shortages, existing caseworkers have to make up the difference. Spitler currently has 76 people in her caseload — the second-lowest amount it’s ever been.

With heavier caseloads came the longer hours. The complaint alleges that in order to complete work on their regular cases, caseworkers regularly worked 60 to 70 hours a week. Lunches were skipped, weekend leisure was cut, work would start early and resume after family dinner into the late hours of the night.

But workers did not receive compensation for this work, the complaint says. The system that case managers use to log their work caps at 40 hours per week, and any additional overtime has to be approved by a supervisor. Spitler said the expectation is that caseworkers will automatically list having worked eight-hour days (or four 10-hour days a week). The only overtime pay caseworkers received was for working on the cases of other employees who were unable to meet their high caseload requirement — and they were only assigned these if they had completed all the work required on their own caseloads.

“The people that I work with, they care, and they work their butts off,” she said. “And they're just drowning.”

The complaint states that Spitler’s experience is typical — and that the state knew that “several hundred members of the proposed class” regularly worked over 40 hours a week. Caseworkers’ supervisors, known as area program managers, were aware of their over-saturated caseloads and what kinds of hours were required to stay up to date on their clients’ needs.

“There's absolutely no question that support coordinators in Arizona are generally carrying a much larger case load than they should be carrying,” said Jon Meyers, executive director of The Arc of Arizona, a community-based organization that advocates for people with intellectual and developmental disabilities and their families. “Turnover is so rampant. The larger issue is really a systemic failure to adequately recruit, compensate, train, and retain enough support coordinators to manage the number of people who are served by the system in Arizona.”

In his work, Meyers said it’s common for families who receive DDD services to go through as many as five caseworkers within a year. “And for people who have high levels of medical needs, support and service needs, and often mental health needs, that kind of disruption in a life can be very damaging,” Meyers said. “It's a huge injustice to the people who count on DDD for services.”

Meyers said that as recently as two years ago, the turnover rate at DDD was 40 percent among support coordinators. “Even today, the greatest need within DDD is for support coordinators,” Meyers said. “It still represents something like 20 to 30 percent of all advertised positions ...The system as a whole is not working as it should.” The DES did not respond to public records requests for current DDD caseworker retention data.

The role of a caseworker is crucial for people with developmental disabilities who receive care from the state. “The support coordinator is the person who's coordinating all the services for an individual with developmental disabilities,” said J.J. Rico, chief executive officer at the Arizona Center for Disability Law. “They're your point of contact to link you to direct services and providers.”

Rico said many of their clients' concerns are a natural result of the overburdened case loads. “Some of the support coordinator meetings are really short. You have meetings in 10 to 15 minutes because they have such a heavy caseload,” Rico said. “If you as a family need to share that you’re seeing a child regress or that they need some therapy, a support coordinator may not be getting as much information as they need to relay that message.’

Spitler said she decided to file the complaint because employees’ ability to advocate for themselves was limited, she said. When caseworkers would raise concerns about bloated caseloads or long hours, management would say they didn’t have the resources to change it, she said.

In 2012, then-Governor Jan Brewer signed into law personnel reforms that would enable the state government to emulate private-sector hiring and firing practices. In particular, supervisors, highly paid employees, and recently hired workers were declared “at will” employees, meaning they could be fired at any time without cause. Caseworkers at the DES's DDD became part of this fireable employee class.

The Department of Economic Security, which is the state's largest agency, has a recent history of utilizing its "at will" power. In October 2015, then-DES director Tim Jeffries, who promised to implement a more "businesslike" approach to the department, fired over 500 employees, the majority of them lower-level staff. Critics said many of the without-cause firings targeted women, minorities, older workers, LGBTQ staff, and individuals with terminal illnesses. Governor Doug Ducey removed him from his position in November 2016. But the "at-will" personnel policies remain, as does the memory of the mass firings.

“There's no question that that law has had a chilling effect on state employees’ willingness to speak up," Meyers  said. "The fact is, state employees have very few protections. If you work within state government and you wish to continue to work within state government, you can rightly be suspicious about whether you will be retaliated against in the event you speak out.”

The Fair Labor Standards Act prevents employers from retaliating against employees who pursue overtime claims in many cases. Case managers who join the complaint may be protected from firing on these grounds and others.

The complaint asks that Arizona be made to award compensatory damages to Spitler and all similarly situated employees who were paid an hourly wage during the last three years (the time period in which Spitler has worked and can speak to).

“These individuals work really, really hard, and really care about what they do,” said Ty Frankel, an attorney representing the caseworkers. “The bottom line is getting the state to pay these individuals the back wages they're owed, and also realize that moving forward, this needs to change. They need to pay people overtime with how hard they're having to work.”

Four other case workers have already joined the case — something that is relatively uncommon while still in the complaint period. Lawyers for the state of Arizona filed paperwork in late July to move the case from the Maricopa County Superior Court to Arizona U.S. District Court, where they filed a formal response to the complaint yesterday.

The Arizona Department of Economic Security did not respond to requests for comment.
KEEP PHOENIX NEW TIMES FREE... Since we started Phoenix New Times, it has been defined as the free, independent voice of Phoenix, and we'd like to keep it that way. With local media under siege, it's more important than ever for us to rally support behind funding our local journalism. You can help by participating in our "I Support" program, allowing us to keep offering readers access to our incisive coverage of local news, food and culture with no paywalls.
Make a one-time donation today for as little as $1.
Hannah Critchfield was an editorial fellow for Phoenix New Times starting in 2019.