Here's Where Ducey, Flake, McCain, and Other Arizona Politicians Stand on Graham-Cassidy 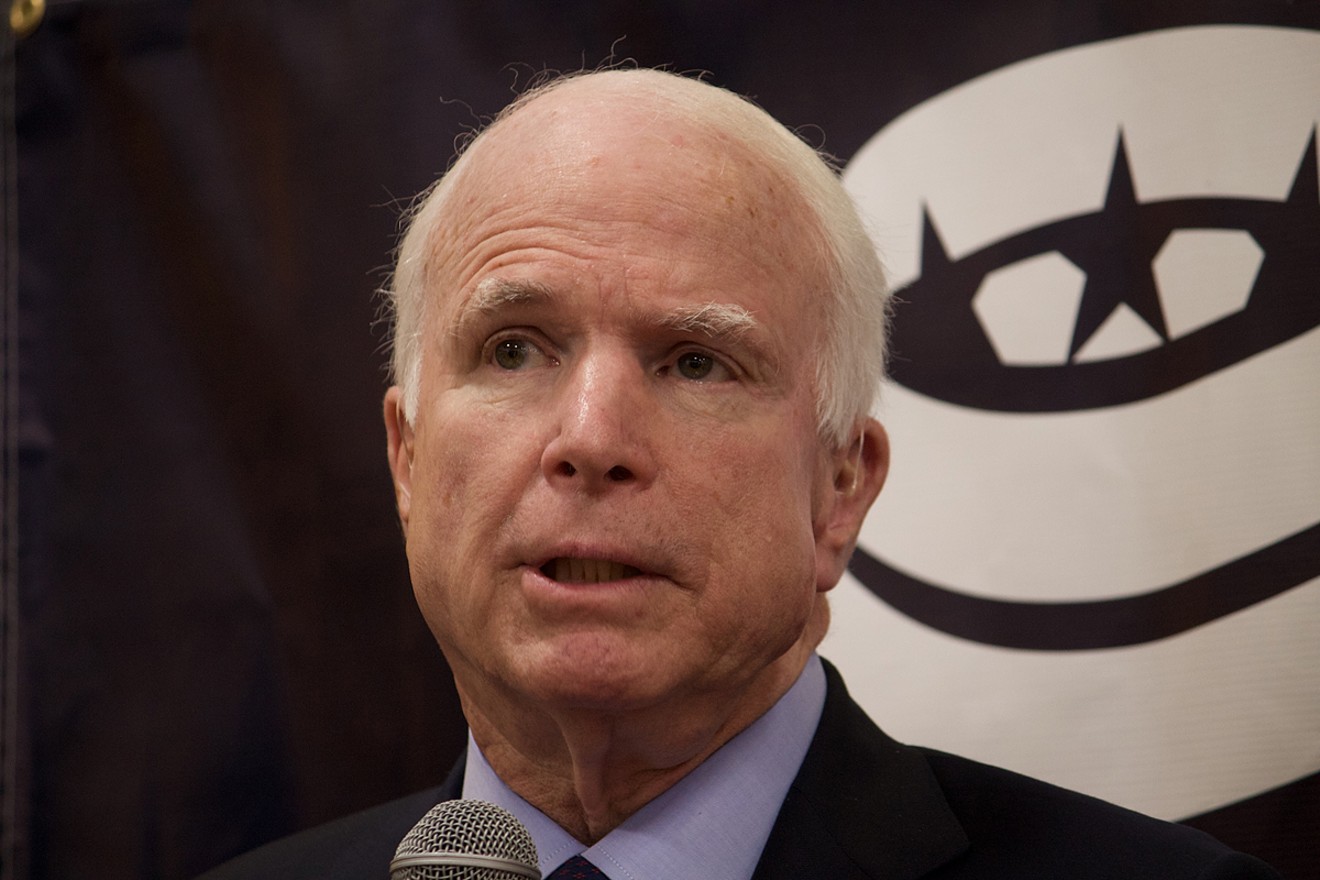 Which way will U.S. Senator John McCain vote on the Graham-Cassidy health care bill? He's not saying yet. Miriam Wasser

In a last-ditch effort to repeal and replace the Affordable Care Act before the September 30 deadline, Republican Senators have introduced a health care plan called Graham-Cassidy (named after Lindsey Graham of South Carolina and Bill Cassidy of Louisiana, who wrote the bill).

It's already stirring up a lot of expected controversy, as every previous plan to repeal and replace ACA has, but some Arizona politicians are in favor of passing it.

It may already have the 50 votes needed to pass, unlike the last attempt in July, when Senator John McCain (along with fellow Republican Senators Susan Collins and Lisa Murkowski) voted no, shocking everybody.

McCain teased everybody Monday by first saying he might "reluctantly" vote for the bill if Governor Doug Ducey supports it, which Ducey does. But, according to CNBC, McCain said hours later "I'm not supportive of the bill, yet."

Update: Here is McCain's official response as of September 22.


I cannot in good conscience vote for Graham-Cassidy. A bill impacting so many lives deserves a bipartisan approach. https://t.co/2sDjhw6Era pic.twitter.com/30OWezQpLg

#GrahamCassidy plan to #RepealAndReplace #Obamacare has my support. It ought to be brought to the senate floor

McCain has yet to tweet out what he would do, but he did tell The Hill he plans to support it.

Those not in favor include AZ Representatives Ruben Gallego and Raul Grijalva, among others.

Arizona would lose big under #GrahamCassidy & @JeffFlake & @SenJohnMcCain have both indicated they could support it. You know what to do.

How many times do the American people have to reject #ACA repeal efforts before Republicans are ready to move on? https://t.co/ddeH3Qpawh


By imposing a per capita cap on Medicaid, #GrahamCassidy limits Arizona's ability to respond to ever-changing rising health care costs.

KEEP PHOENIX NEW TIMES FREE... Since we started Phoenix New Times, it has been defined as the free, independent voice of Phoenix, and we'd like to keep it that way. With local media under siege, it's more important than ever for us to rally support behind funding our local journalism. You can help by participating in our "I Support" program, allowing us to keep offering readers access to our incisive coverage of local news, food and culture with no paywalls.
Make a one-time donation today for as little as $1.
Dillon Rosenblatt was the social media editor at Phoenix New Times from 2016 to 2018. Originally from New Jersey, he is a graduate of Arizona State University's Walter Cronkite School of Journalism and Mass Communication.
Contact: Dillon Rosenblatt
Follow:
Twitter: @DillonReedRose