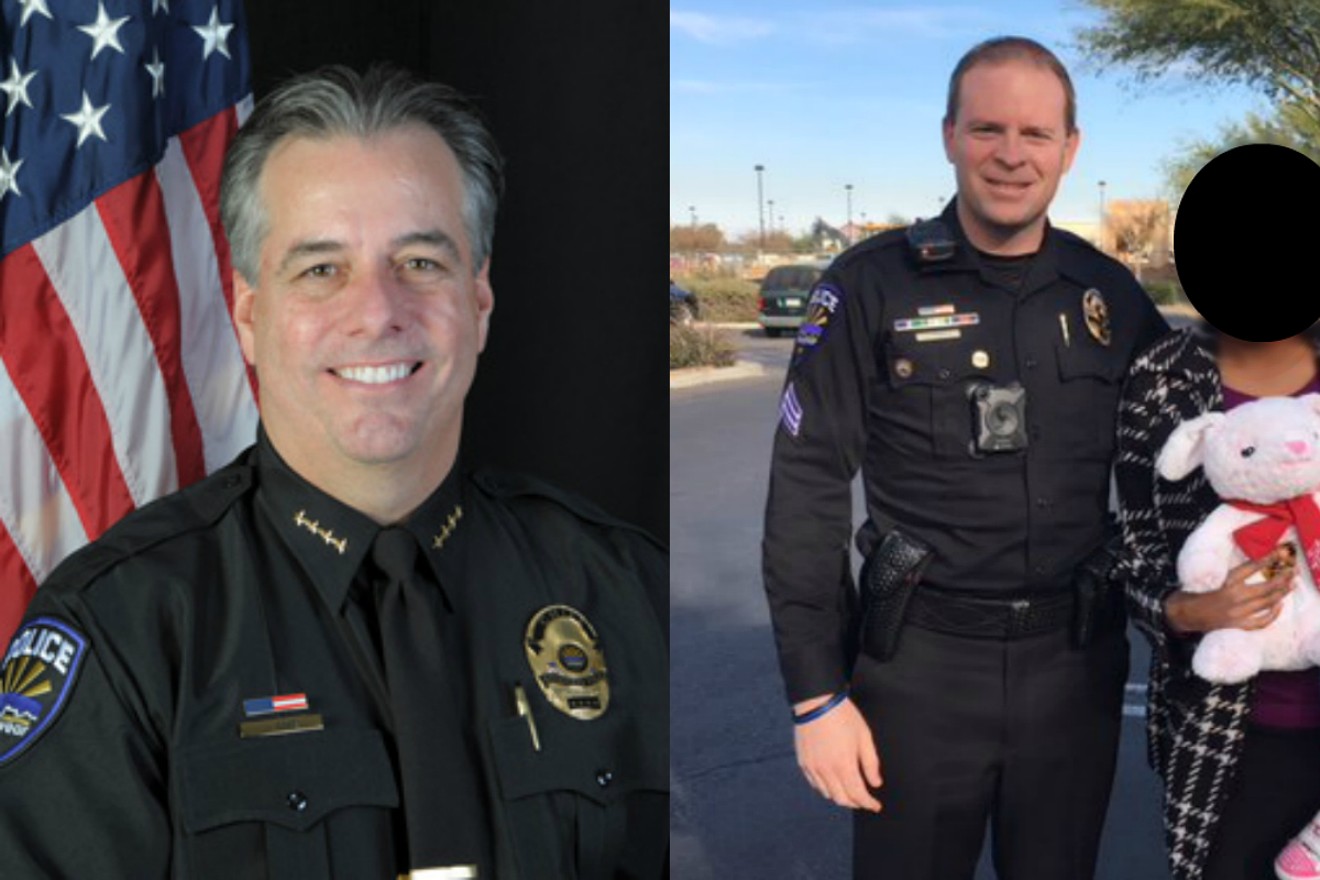 In October, Geier and his deputy chief, Justin Hughes, were placed on administrative leave following allegations of impropriety, but the city has yet to disclose any details about the allegations against Geier and Hughes.

"Today, Jerry Geier was terminated from employment with the city of Goodyear and his role as Police Chief," a press release from the city of Goodyear stated. Based on the findings of the internal investigation that began in October, "it was determined that Geier violated administrative policies. Those violations are non-criminal and non-financial in nature."

Goodyear, a city west of Phoenix with a population of about 80,000, has a police force of roughly 150 employees. Geier previously worked as police chief for the Yuma Police Department from 2009 to 2012, when Goodyear hired him. Acting Chief Santiago Rodriguez will continue as chief until further notice, a spokesperson for the city said.

The city has been tight-lipped about what the allegations against the chief and others entail, and Goodyear officials also have refused to supply records on the investigations into the accusations surrounding Geier and Hughes, claiming the ongoing investigation made those records exempt.

Even now, the city says those records are still exempt from public disclosure, since, "Employees who are terminated have the right to an appeals process. Therefore, any further details about the original allegations, the investigation, or the findings will not be available until the appeals process has concluded pursuant to the Peace Officers Bill of Rights," the press release from the city states.

There's a possibility allegations of internal affairs misuse may have caught up with Geier and others. As Phoenix New Times previously reported:

The city won't say what the investigation is about, but the department has a storied history of misusing internal affairs to retaliate against officers who higher-ups didn't like.

While Halloran was uncovering numerous instance of internal affairs misuse, Hughes led the department's professional standards or internal affairs bureau. Rogers was second-in-command in Goodyear then.

Rogers' early career at Goodyear was marred by a false report he made about a burglary back in 2005. Drunk and in the mood to prank, he called the Goodyear police non-emergency line and lodged a false report that he saw black people committing the burglary. He was suspended for two weeks over it. But the incident didn't hold him back in Goodyear. Over time, Rogers rose through the ranks, purged his internal affairs files, and inserted himself into internal affairs investigations.

As Halloran's report showed, Rogers also has been accused of launching internal affairs investigations against officers he didn't like. Her prime example was the case of Lieutenant Kim Celaya, formerly the highest-ranking woman in the department. After Celaya's boyfriend punched her in the face and she declined to press charges against him, Rogers opened up an internal investigation on her that led to her termination and later being stripped of her peace officer certification by the AZ POST.

Yet one of the people who investigated Celaya, Sergeant Joe Pacello, had been in trouble years earlier for assaulting an Maricopa County Sheriff's Officer deputy during a training conference in Miami. Pacello was suspended for two days, but later promoted.

Earlier this month, Halloran wrote on Facebook that Pacello allegedly told fellow officers after a hearing, "I want to punch [Halloran] in the fucking face" for her news report. She said Hughes was tasked with investigating that threat against her, but no action was taken after Pacello denied he had said it.

Four months after the 12 News investigation in 2014, Rogers resigned. But Hughes, who had already been heading internal affairs, remained, and, according to one Goodyear officer, continued to use internal investigations as a way to retaliate against officers he didn't like.

After New Times wrote about the current investigation into Geier and others, an ex-Goodyear police officer reached out to share his experience being the target of Goodyear's internal affairs headhunting.

The officer, who asked to remain anonymous, worked for the Goodyear Police Department from 2012 to 2015. He said Geier and Hughes "didn't like me because I frequently voiced my concern about favoritism in the department and excessive investigations on officers they didn't like."

After speaking up several times, the officer said, he was placed on administrative leave for not attending a defensive tactics training class. But the officer said he had a legitimate reason not to: He had just had surgery and was on medical leave during the time the class was taking place.

Two weeks after returning from medical leave, the officer said, Hughes put him on administrative leave and a union representative told the officer he ought to quit as he would likely be fired otherwise.

"Because I was not one of Hughes' buddies, I was blacklisted and forced to resign," the officer said. "They did this to several good officers, and swept a lot of stuff under the rug from officers who were part of the 'Buddy System'. I'm guessing somebody finally stood up to them and called some higher-ups."

Hughes was then moved to head the Support Services Bureau, though at least one incident from his career as a cop reveals a questionable history when it comes to supporting citizens.

In 2005, Hughes was sued by a woman named Martina Blanchard while he was working for the city of El Mirage. In the lawsuit, she alleged that on September 3, 2005, Hughes pulled over her son, who was driving her car, and interrogated him about a $5 million notice of claim that Blanchard had filed against El Mirage. According to that claim, on November 27, 2004, Blanchard received a call from an El Mirage police officer informing her that her daughter was in trouble with police and Blanchard ought to return home.

When Blanchard arrived at her residence, she saw both of her daughters sitting in the back of police cars, and her husband, whom she had a restraining order against, was on her property. Blanchard said that when she asked why her husband was present Hughes cut her off and told her to "shut up."

Blanchard again tried to question what was going on, but, she says, "Hughes immediately yelled to one of the other officers at the location to arrest her. At that point, a police officer threw Mrs. Blanchard to the ground and kicked her in the feet at the same time."

Blanchard was violently detained and left in the back of a police car while the officers at the residence ordered a pizza and eventually released her without pressing any charges, the lawsuit states.

The following year, Blanchard alleged, Hughes searched her son and her vehicle, and had dogs search the vehicle as well.

The case ended in a settlement one year later, according to the court docket, though the settlement amount is not available in court filings.

Blanchard's lawyer declined to comment on the settlement amount. New Times was unable to reach Blanchard by phone. A spokesperson for the El Mirage police department said that per Arizona state record-keeping policies, they do not have any information on whether Hughes had been disciplined during his time at the department.
KEEP PHOENIX NEW TIMES FREE... Since we started Phoenix New Times, it has been defined as the free, independent voice of Phoenix, and we'd like to keep it that way. With local media under siege, it's more important than ever for us to rally support behind funding our local journalism. You can help by participating in our "I Support" program, allowing us to keep offering readers access to our incisive coverage of local news, food and culture with no paywalls.
Make a one-time donation today for as little as $1.
Meg O'Connor was a staff writer for Phoenix New Times from April 2019 to April 2020.