The Arizona Department of Corrections in Phoenix. Matthew Hendley
On July 6, 1995, Barry Jones, a mechanic in Tucson, was sentenced to die.

Jones was convicted of the rape and murder of his girlfriend's 4-year-old daughter, Rachel Gray, who died of a blow to her abdomen that was left untreated. But over the next 20 years, as Jones appealed his conviction through the courts, the state's case against him began to unravel.

After Jones' attorneys uncovered new, potentially exonerating evidence in the case, a federal judge ordered the state to give Jones a new trial or release him. It was a major break in his case.

Now, after a U.S. Supreme Court ruling Monday, the state has a green light to send Jones back to death row — despite the evidence in his favor.

The Supreme Court ruled on Jones' case after the state of Arizona challenged the appeals of Jones and another prisoner who believed he had bad lawyers at trial, in a petition called Shinn v. Ramirez. The other death row inmate, David Ramirez, was convicted of murdering his girlfriend and her daughter in 1989. Ramirez, unlike Jones, challenged his conviction by presenting evidence of a mental disability, not innocence.

Both had argued that their attorneys were ineffective — during trial, then again as they appealed their cases post-conviction. Both requested that federal courts re-review the evidence in their cases. In Jones' case, a federal judge did — and ordered that the state either release Jones or re-try him. 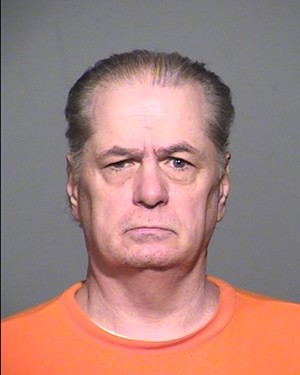 Despite potentially exonerating evidence in his case, Barry Jones may still be executed.
Arizona Department of Corrections

The new Supreme Court ruling in Shinn v. Ramirez reverses that decision. For other potentially innocent convicts like Jones around the country, the new ruling closes a rare loophole that allowed them to present new evidence in their case, if their initial lawyers were ineffective.

In a 6-3 decision, the high court ruled Monday that federal judges may not consider evidence in cases like Jones' if the evidence was not presented earlier in the state trial courts — even if that evidence is exonerating. And even if it was not introduced because incompetent attorneys didn't think to look for it.

Robert Dunham, executive director of the Death Penalty Information Center, told Phoenix New Times that while impacts of the ruling will be felt around the county, he believed the Supreme Court case was a "byproduct of Arizona's failed [death penalty] system."

His organization is a nonpartisan research group that investigates the death penalty nationally.

"Arizona has systemically failed to provide meaningful representation to capital defendants," Dunham said. The very fact that the Supreme Court was forced to deliberate on what to do when prisoners suffered ineffective counsel during multiple stages of their cases was evidence of Arizona's failures, he said.

Dale Baich, an adjunct professor at Arizona State University's Sandra Day O'Connor College of Law and a former capital public defender, agreed. "The real problem is that qualified, competent, well-resourced state post-conviction counsel are not always being provided to the prisoners," he said. "That's the cause of the problem."

Baich also noted that prisoners face immense barriers when requesting a new, federal review of the evidence in their cases. To prove your lawyers are ineffective, under the law, you have to meet a high bar. The standard requires evidence that your attorneys were "objectively unreasonable" to a point that it impacted the trial.

Furthermore, before a 2012 Supreme Court in an unrelated case originating in Arizona, Jones could not have had a new hearing, regardless of how bad his representation was.

In that 2012 Martinez v. Ryan case, the high court ruled that prisoners could present new evidence in the federal court if they were convicted in Arizona and other states which make it more difficult to claim ineffective counsel.

"In the 1980s and early 1990s, the courts really started to limit the ability of death-sentenced prisoners to get relief in federal courts," Baich said. Because of statutory amendments and court interpretations, there are now "very limited exceptions that allow a federal court to look at the merits of a claim," he explained.

In 2017, an investigation by The Intercept brought national attention to Jones' case, which began in a trailer park in the southeast outskirts of Tucson. The publication uncovered serious flaws in the state's case against Jones. Among them: The state's timeline, the linchpin of the case, assumed the girl's injuries had occurred the day before her death, when she was with Jones. But medical experts testified that the fatal injury, a blow to her abdomen, was inflicted days earlier.

Because of the faulty assumptions about the timeline, law enforcement focused immediately on Jones as a suspect, ignoring other potential suspects who were in contact with Gray in her final days, The Intercept found.

Crucially, much of this evidence was not presented at Jones' trial, or in his first post-conviction appeals. Jones alleges this was due to the incompetent, under-resourced counsel provided to him by the state.

Now, thanks to the Supreme Court ruling, it appears that Jones will not get a new trial. He is headed back to death row, just as the state of Arizona is restarting executions after eight years. It's not clear when, or if, Jones will be executed. The Attorney General has not yet issued a death warrant for Jones, which would set a date for his execution.

The state, for its part, is adamant that Jones is guilty, and has celebrated its victory in the Shinn v. Ramirez case this week.

Arizona Attorney General Mark Brnovich applauded the Supreme Court's decision in a statement on Monday. The ruling, Brnovich said, would cut short the "endless delays" in capital cases. Those cases often linger on appeal for years, if not decades — forcing families who lost loved ones to rehash the crime, over and over, through endless hearings.

In Brnovich's telling, the appeals process, as it stood before the ruling, permitted "convicted killers to dodge accountability for their heinous crimes."

Brnovich's release went on to claim that attorneys for death row prisoners have cooked up a "scheme of procedural gamesmanship," wherein "evidence is intentionally withheld in state courts in order to achieve a lesser, more favorable sentencing further down the line."

Dunham and Baich vehemently rejected this claim. "That is stupefyingly false," Dunham said. "A person who is innocent does not conspire with his lawyers to fail to present evidence of his innocence so he can be convicted and possibly executed."

"Prosecutors who do not care about fair process have repeatedly derided the appellate process as simply an attempt to delay," Dunham said. That, he said, "runs counter to their duty to do justice."

Furthermore, even before the Supreme Court ruling this week, it was very difficult for a prisoner to manage to get a new hearing in federal court on the merits of their case. Baich said he believes that only "half a dozen or less" such evidentiary hearings have been conducted for death row prisoners in Arizona over the last 10 years, including Jones' hearing — less than 10 percent of people who had requested such a hearing.

So far, it's not clear what's next for Jones. This month, Arizona executed Clarence Dixon, charged with raping and killing an Arizona State University student in 1978.

Frank Atwood, convicted of murdering an 8-year-old girl, is scheduled to die on June 8. Who will follow is still unknown. There are over a hundred people on death row in Arizona. Of those, 23, including Atwood, have exhausted their appeals — meaning the state could issue warrants for their death at any time.

Jones' fate, once again, is in the hands of the state.
KEEP PHOENIX NEW TIMES FREE... Since we started Phoenix New Times, it has been defined as the free, independent voice of Phoenix, and we'd like to keep it that way. With local media under siege, it's more important than ever for us to rally support behind funding our local journalism. You can help by participating in our "I Support" program, allowing us to keep offering readers access to our incisive coverage of local news, food and culture with no paywalls.
Make a one-time donation today for as little as $1.