The historic Shepherd of the Valley Lutheran Church, at 15th Avenue and Maryland. Elizabeth Whitman
A historic Alhambra church is planning to raze its parking lot, several buildings, and the 50-year-old pine trees around them to make way for a gated community of 34 single-family homes.

Until last week, residents in the neighborhood had no idea this project was in the works.

Now that they've found out, a number of them are furious that they received no notice from Shepherd of the Valley Lutheran Church.

"I'm really not happy about the way this whole thing has been handled," Elayne Jackson said. She and her husband, Chris, have lived in their home just north of the church for 25 years.

Jackson learned about the proposed development last week, after a friend happened to walk by the small demolition sign in front of the swooping Midcentury Modern church.

Although the sign is spiked into the lawn directly at the corner of 15th and West Maryland avenues, it is barely noticeable, much less legible, from the street. It is certainly not visible from the houses of the residents who would be directly affected by the proposed development.

"It is in the most inaccessible spot for anybody to see, which I think was done intentionally," Jackson said.

The demolition sign in front of the church is dated August 29. But planning documents, obtained via a public records request, show that the proposed gated community has been in the works far longer than that.

An architect has been retained, and sketches drawn up. A meeting to discuss the development was held in early January. In December, the church solicited the requisite input from city departments like Public Transit. 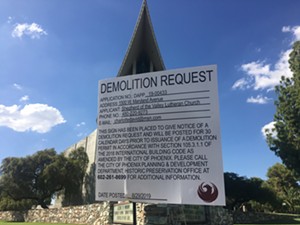 Locals believe that the demolition sign, posted at the corner of 15th and Maryland, was deliberately placed where they'd be unlikely to see it.
Elizabeth Whitman
The proposed development would overtake close to half of the square, 8.3-acre parcel, which the church still owns, property records show. Subdivisions with two-story homes would replace the vast parking lot that currently spans the northern and western halves of the lot, and the dozens of giant pine trees along those edges would be chopped down, evidently to make space for a wall.

The prospect of a gated community of two-story houses dismayed several residents in the surrounding neighborhood of one-story homes. 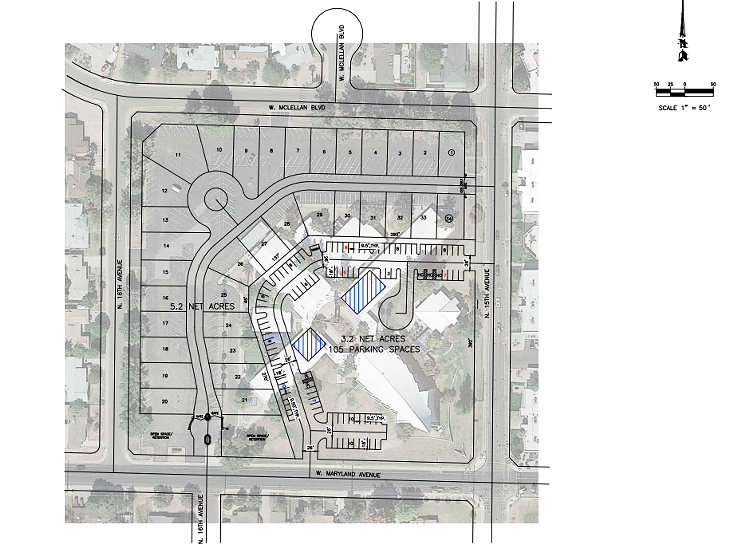 Subdivisions would replace the parking lot, several buildings, and the giant pine trees behind Phoenix's Shepherd of the Valley Lutheran Church.
City of Phoenix Planning and Development

"Will we be looking at a wall?" asked Brian Davis, who has lived with his wife Pam in a home north of the church since 1991, with a front row seat to the diminishing number of cars gracing the parking lot every Sunday.

"I can understand why the church is doing it," he said. "But I think it's too many houses," he added, musing, "Hate to see the trees go."

A few houses down, Doug Askerman, who has lived in the neighborhood for 12 years, had no idea that a development was under way. "I haven't heard a thing," and neither had his wife, he told New Times.

Another woman in the neighborhood, who declined to give her name, said she had just learned about the proposed new homes.

"The thing that bothers me is that the demo sign is at 15th and Maryland, but there’s been nothing posted here," she said as she stood watering a small palo verde tree outside her home, which is behind the church. Asked whether she had received any notice from the church or the city, she shook her head. "Absolutely nothing."

A demolition permit application filed by the church shows that four full buildings and part of a fifth, comprising a nursery, a hall used for Bible study, and classroom space, would be demolished. The main sanctuary, with its accompanying 125-foot freestanding bell tower, and two small buildings flanking it, would remain.

Both the sanctuary, which was completed in 1965, and the bell tower are eligible for Phoenix's Historic Property Register. They are considered examples of Midcentury Modern architecture.

A black-and-white aerial photo from 1969 shows the parking lot curving around the church, with a line of tiny trees dotting its northern edge. Along the west, slightly older trees form a thin line. 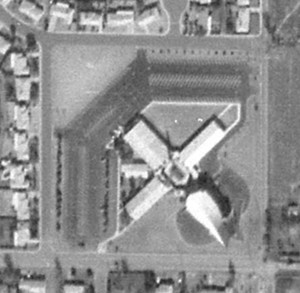 An aerial photo of the church in 1969.
City of Phoenix
Reached by phone, Michael Rust, who is listed as the applicant on the demolition permit, told Phoenix New Times he was "the architect working with the church to be able to simplify their life."

He declined to comment further without getting permission from the church's pastor, the Reverend David Marz.

The church is in Phoenix's District 5, which is represented by recently elected Councilwoman Betty Guardado. Constituents began calling into her office with concerns on Monday, and while staff said they are looking into it, they also said that the city council can't do much.

Because the church is already zoned for single-family houses, the city council has little input over the fate of the church's buildings, its parking lot, and the surrounding trees, said Andrew Wunder, Guardado's chief of staff.

Rather, city oversight of the project rests in the hands of the Planning and Development Office, which reviews the site and approves necessary building permits. Angie Holdsworth, a spokesperson for the office,
confirmed that since the zoning does not need to change, "it does not go through a public hearing process."

As for the trees, the city's Tree and Shade Master Plan, which called for more trees — not fewer — throughout the urban heat island that is Phoenix, offers little protection. When the plan came out, in 2010, it called for the city to improve to update city code and zoning ordinance "to facilitate the protection, preservation and increase of the urban forest on both public and private property."

Nine years later, the city's requirements still fail to do so. 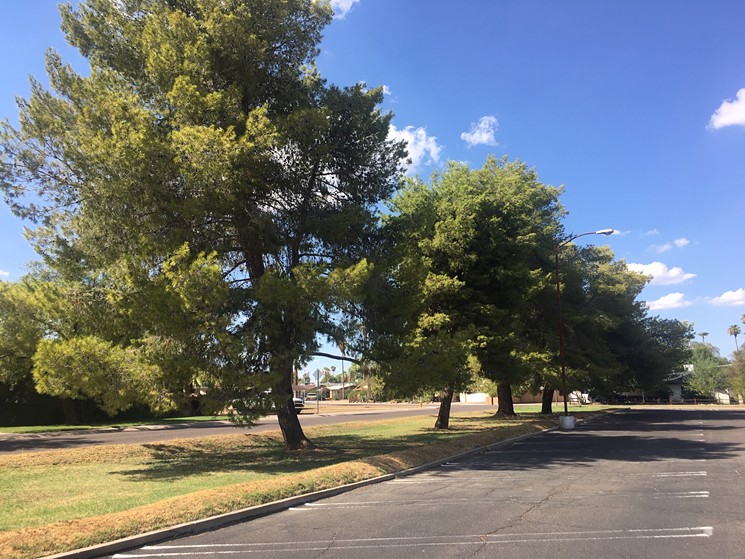 The pine trees slated for demolition are about 50 years old.
Elizabeth Whitman
Developers have to submit a landscape salvage plan to the city, explaining how it will keep, move, or replace trees. Planning and Development staff review and then approve or deny the plan, and "if a tree is not salvageable, they would need to replace it," Holdsworth told New Times via email.

Asked how it was possible for 50-year-old trees to be replaced, Holdsworth responded that "the priority is to keep or replant the tree. If it is not salvageable then the replacement would have to be made up in caliber with other trees."

The church has yet not submitted this plan, Holdsworth said.

Like her neighbors, Jackson said she didn't blame the church for trying to develop its property. "I've watched the number of cars decrease," she said. But, she added, "I find it offensive that the church did not solicit opinions or concerns from the neighborhood."

To her, even though the development seems like a foregone conclusion, Jackson said she wanted the community to have a say.

“My plan right now is to try to get the neighbors to be vocal. I still believe that in our society, we as a community can effect a change,” she said. “I don’t think we can stop it — and honestly, I’m not looking to stop it — but I would like to have our trees stay, and if not all our trees, then the majority of the trees.”
KEEP PHOENIX NEW TIMES FREE... Since we started Phoenix New Times, it has been defined as the free, independent voice of Phoenix, and we'd like to keep it that way. With local media under siege, it's more important than ever for us to rally support behind funding our local journalism. You can help by participating in our "I Support" program, allowing us to keep offering readers access to our incisive coverage of local news, food and culture with no paywalls.
Make a one-time donation today for as little as $1.
Elizabeth Whitman was a staff writer for Phoenix New Times from March 2019 to April 2020.