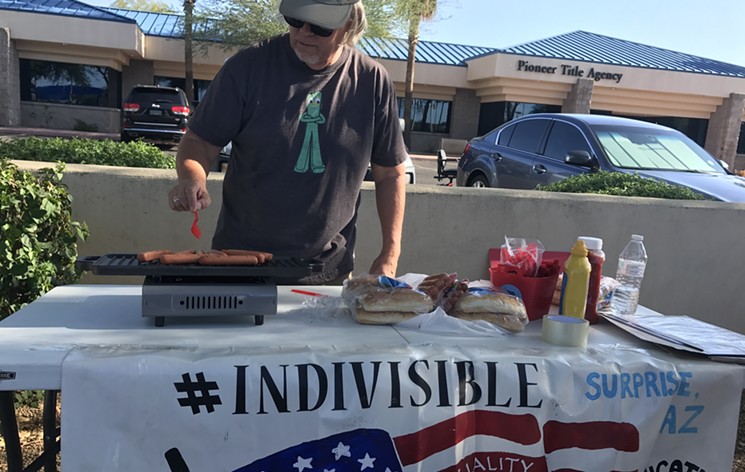 Demonstrators were grilling franks, literally, outside Congressman Trent Franks' office during Day of Action protests.
Lindsay Moore
The Day of Action, #donttreadonAZ, in Arizona was no Charlottesville. The activists brought signs, not guns.

Numerous groups that identify themselves as progressives showed up at 15 congressional offices and one Republican fundraiser on Monday afternoon to encourage their representatives to consider issues that are important to them such as health care.

But in contrast to the violence by white supremacists in Virginia on Saturday, which left one counter-protester and two police officers dead, there was no fighting, no armed protesters, just some loud chanting and a lot of homemade placards.

Not that some of the legislators weren't worried.

Members of activist groups such as Indivisible, Desert Progressives, and AZ Blue 2020 were at the demonstration outside Republican Congressman David Schweikert's fundraiser at the Celebrity Theatre in Phoenix

These groups have history with Schweikert: His office sent a June 5 letter warning his constituents about the supposed danger that these newly formed activist groups pose.

“Be on the lookout,” the letter stated. “Groups called 'Resistance,' 'Stronger Together,' 'Indivisible,' 'We Are the People,' and 'We feel the Bern' are far left front groups determined to inflict the kind of violence that we have never seen before.”

Sixty-nine-year-old John Ainlay, a resident of Scottsdale, dismissed the notion that he and other activists were out for violence. Many of the people demonstrating, he explained, were his age or older. “I only became active this year because of the threat to my health care."

Phoenix New Times reporters were at four of the 16 demonstrations. Here are some highlights from those sites:

Congresswoman Kyrsten Sinema drew a crowd of protesters.
Antonia Noori Farzan
At the office of Representative Kyrsten Sinema, a Democrat who represents the Ninth Congressional District, Megan Carmilani asked staffers why the congresswoman hadn't been at a recent vigil honoring the people who had been killed after white supremacists plowed a car into a crowd of nonviolent protesters in Charlottesville.

"I know she was invited, but she didn't show and didn't send a representative," Carmilani said.

"I'm not responsible for her schedule, so I'm not sure where that request was sent," a staffer who gave her name as Michelle replied. (For what it's worth, Sinema did condemn white supremacy in particular and hate in general in two tweets from her personal account.)

Many of the protesters who had gathered at Sinema's Phoenix office voiced concerns that she'd moved away from her progressive roots and was voting with Republicans at least half the time.

"I just hope she knows that progressive and bipartisan are not mutually exclusive terms," Alex Wakefield pointed out. He'd just moved into his freshman dorm room at ASU the day before, and had shown up to the rally with members of the ASU Young Democrats.

"I hope she remembers the progressivism that got her elected," he added.

Sinema's office staff offered the protesters water and asked if anyone needed to use the bathrooms, but no one took them up on either offer. Then the staffers informed the group that only four people, and no cameras, were allowed in the office at a time.

The protesters chose to move outside instead. Shortly after they'd delivered their demands, they were told that building management prohibited large gatherings and they'd have to stand on the sidewalk.

Mary Ellen Page of East Valley Indivisible Progressives, who was holding a "No Border Wall!" sign, made a request: Could Sinema hold a public town hall at some point in the near future?

"Most of us are pretty happy with the job she's doing — but not on everything," she said.

Congressman Trent Franks was worried about these protesters?
Joe Flaherty
Republican Schweikert, who represents Arizona’s Sixth Congressional District, was scheduled to appear at a fundraiser at the Celebrity Theatre in Phoenix, a circular building made of concrete with a gate surrounding the parking lot. Cars began to pull into the lot around 5 p.m.

But it wasn’t just donors there this evening: About two dozen activists gathered to greet Schweikert and his well-heeled guests.

The demonstration was organized by advocacy groups like Indivisible Phoenix as a part of their day of action. Several cars and trucks honked approvingly as they drove by on the road, just a few beside the protesters on the sidewalk.

Peggy Bauer, 63, a clinical nutritionist in Scottsdale, said the people standing at the fence were unhappy with Schweikert’s willingness to listen to their concerns.

“It’s people who think that Congressman Schweikert is not making any effort to represent us or to listen,” Bauer said. “He doesn’t hold town halls."

She said that although Schweikert may be confident going into the 2018 election, having won re-election handily last fall, they were there to show him not everyone is in his corner.

“Maybe we can make him slightly less confident in his position,” Bauer said. “Maybe enough so that he would listen, but he doesn’t seem inclined that way.”

Jere Humphreys knows the power a good, old-fashioned protest can have.
Molly Longman
Meanwhile, about 20 demonstrators gathered quietly outside the glass doors of the office of Ruben Gallego, a Democrat who represents the Seventh Congressional District.

Ken Kenegos, a member of Progressive Democrats of America’s Arizona chapter, said the rally’s focus was to work together with Gallego to keep things from falling apart.

Kenegos brought a large orange poster asking Gallego to co-sponsor the eight progressive bills that were part of the “people’s platform.” Gallego had already shown his support for at least five of the bills, but Kenegos and a handful of other demonstrators went into his office to speak with his staff about three other bills, including a criminal justice and immigrant rights bill bashing private prisons and an Inclusive Prosperity Act working to tax Wall Street.

Redeem Robinson, an activist and state senate candidate for District 30, spoke to the demonstrators boasting Planned Parenthood T-shirts and artsy signs reading “Democracy is under attack” and “dissent is beautiful” in a shaded spot outside the representative’s office.

“[We’re here] to send a message to Representative Gallego about a few bills,” Robinson said. “I believe that’s going to move America forward,”

“I’m old enough to have been involved in the Civil Rights Movement and the anti-war movement in the ‘60s and ‘70s,” Humphreys said. “I thought we were finished with this. And we’re not.”

Monday he carried a homemade “Republicans: hands off our health care” sign. He said he’s seen what people coming together for a good old-fashioned protest can do. He believes one of the only ways to fight bigotry, hatred, and racism is to make your voice heard.

Back when President Donald Trump was elected, Humphreys set a goal to go to one demonstration a month until a new president held the office. So far, he’s ahead of schedule. He’s been to 16 events.

“I really didn’t expect to have to hit the streets again,” Humphreys said. “But it will be difficult to change the system if we don’t take to the streets.”

Brianna Huey has a new car to help her with her ailing children
Lindsay Moore
No one grills Trent Franks quite like Wendy Garcia does.

The Indivisible Surprise president has been persistent with her message since recorded a Facebook Live of her roundtable with the Republican congressman last month. On the statewide Day of Action, Garcia and fellow Eighth Congressional District constituents grilled hot dogs and carried signs outside of Franks' office.

Garcia passed out blown-up photos of Franks meeting with Sebastian Gorka, a White House aide and former Breibart writer. Gorka has been linked to Nazi-allied groups in the past and most recently said that white supremacy was not the problem when referring to the fatal protest in Charlottesville, Virginia.

The group of more than a dozen protesters weaved through the parking lot to Franks office to deliver the photographs and ask questions about the meeting. They were disappointed to find that the doors were locked, the lights were out, and a police officer was on his way up the stairs.

The protesters signed the photos and slid them under the door before they were asked to leave by the officer.

Back outside, Congressional District Eight hopeful Brianna Westbrook spoke to protesters and introduced mother of two Brianna Huey. Huey's children Melianna and Eastahn both have serious medical ailments that require round-the-clock care and often lead to dozens of hospital visits throughout the year. Huey has become a vocal advocate for the Affordable Care Act, which Franks voted to repeal in the House.

To show her commitment to the community, Westbrook donated a SUV to Huey and her family to make travel a little easier. Huey had told Garcia last month that her Jeep was failing and Garcia put her magic into action and recruited Westbrook's help that same day. Garcia also helped donate new car seats for Melianna and Eastahn.

Westbrook used this opportunity to pass around her petition to put her on the ballot for the next election and to emphasize her platform of community first.