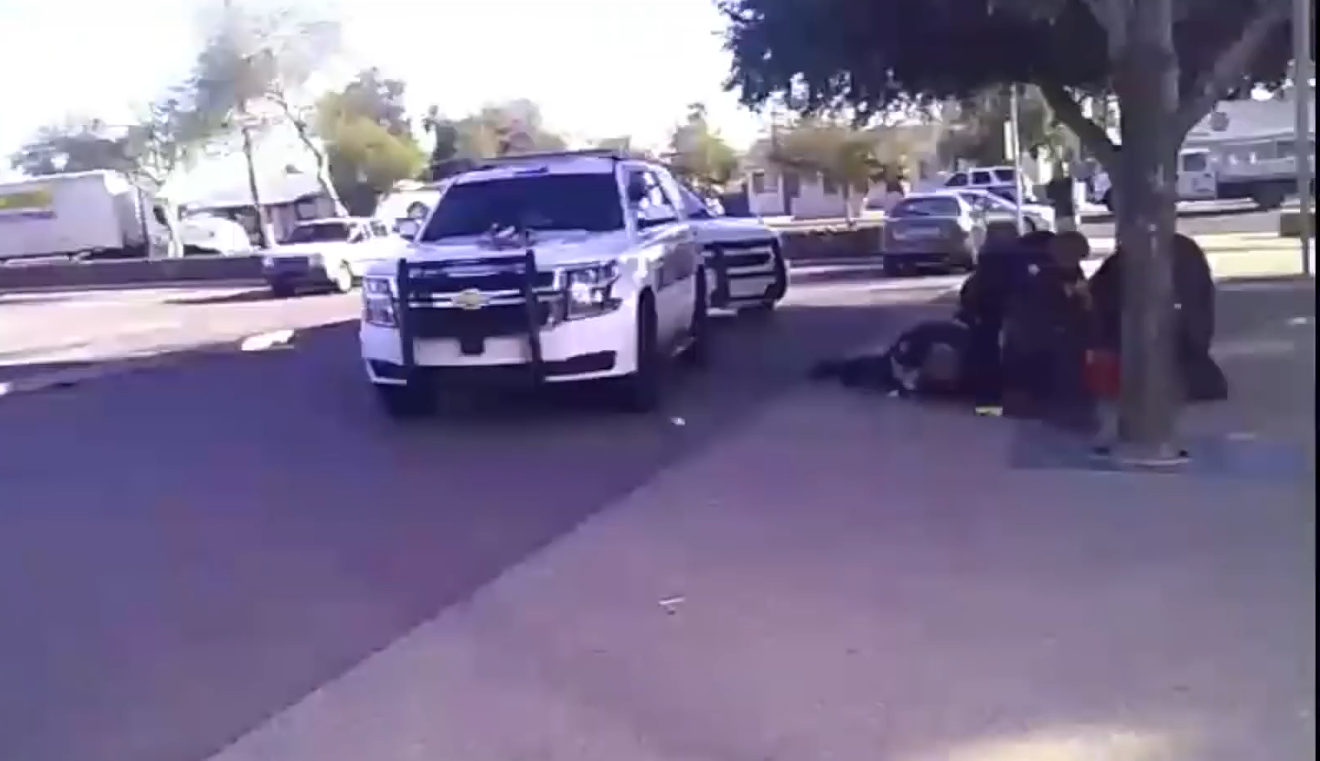 Body camera footage of the moments before Phoenix police killed Muhammad Muhaymin. YouTube
Three years before the death of George Floyd, a Black Muslim man in Phoenix died as officers kneeled on his neck and shoulders. "I can't breathe," that man, Muhammad Muhaymin, had told them.

For years, the City of Phoenix fought in Arizona's branch of the U.S. District Court to keep reams of documents secret in the lawsuit over Muhaymin's death. This month, after the Associated Press and civil rights group Muslim Advocates sued to unseal them, many of those documents became public for the first time.

The documents hint at the strength of the legal case that attorneys for Muhaymin's family built against the officers and the city.  And they also reveal just how much the national reckoning over Floyd's murder informed Phoenix's efforts to keep the Muhaymin case out of the public eye.

"The city went to great lengths to keep what happened on January 4, 2017, to Muhammad Muhaymin a secret," said David Chami, one of the lead attorneys on the case. "I am floored. I was floored all along."

In response to questions from Phoenix New Times, Dan Wilson, a city spokesperson, noted that the first order governing confidentiality in the case was issued in May 2019, "approximately a year prior to the George Floyd case."

But in requests for gag orders against Chami's team, and in their requests to seal documents in the case, attorneys for the city continually alleged that, as Chami put it, "the protests made it dangerous for Phoenix police" if the public knew about the Muhaymin case.

Muhaymin's sister, Mussalina, filed the lawsuit against the city 11 months after his death, in December 2017. The years-long legal battle that followed ended last month in a $5 million settlement that, Chami said, he would not have dreamed of when he first took the case years ago.

The parallels to Floyd's death were stark. Both ended the same. Both started with the report of a minor public disturbance.

Floyd was accused of using a counterfeit bill at a convenience store. Muhaymin was attempting to use a public restroom at the Maryvale Community Center, carrying his chihuahua.

In Muhaymin's case, the director of the community center refused to allow him in the restroom with the dog, and called the police. Upon arrival, officers discovered that Muhaymin had an outstanding arrest warrant for failing to appear in court on a misdemeanor drug charge. During the course of the fatal arrest, he was held down by several officers at one time, who kept their body weight on him even after he vomited.

Muhaymin left behind two children, including a fifteen-year-old daughter.

"There were ten officers for one man, unarmed, not threatening anybody," said Sanaa Ansari, a staff attorney for Muslim Advocates. "It was such an egregious case."

Ansari recalls that the Washington-based organization became most alarmed last spring, when federal judge Susan Brnovich sealed documents relating to the motion for summary judgment, a major determination on the merits of a case.

But the push to keep records confidential in the case and prevent the Muhaymin family from speaking to the media had begun more than a year prior.

Two days after Floyd's death, on May 27, 2020, Haytham Faraj, one of the two lead attorneys on the Muhaymin case, wrote an emotional post on Facebook. Muhaymin's death, Faraj wrote, was "the same type of murder" as Floyd's. He attached stills of the body camera footage from 2017, depicting officers kneeling on Muhaymin's back.

"I represent his family," Faraj wrote. "He did not deserve to die."

In response to Faraj's posts, attorneys for Phoenix requested an "expedited" protective order, calling the statements "troubling." The city requested yet another protective order in October, the newly unsealed records reveal, after national media appearances by Muhaymin's attorneys discussing the case.

The city alleged that the social media posts could lead to "collateral and potentially catastrophic damage," amounting to conduct that would "provoke anger, anti-police sentiment and violence against police officers," putting their lives at "even greater risk than normal."

"In this current environment, with protests across this country turning violent, with police officers being targeted for assassination," attorneys for the City of Phoenix wrote, "the result of Plaintiff's counsel's comments to the media... is no different than adding gasoline to a burning fire."

In another newly unsealed court filing, attorneys for the Muhaymin family noted that the city was alleging that the family had committed a federal crime — inciting violence against police officers — by speaking publicly about the case.

"It was all a dog-and-pony show, as far as I'm concerned," Chami said.

Judge Brnovich denied the city's repeated requests for gag orders against Muhaymin's family. But, at times using the same arguments, the City of Phoenix did succeed in keeping some of the most significant evidence and court filings in the case sealed.

Those documents included the defendants' statement of facts, the deposition testimony of multiple officers involved, expert testimony, and Judge Brnovich's order on the motion for summary judgment, a ruling that can be central to the outcome of a case.

"There is a context here — Mr. Muhaymin's case happening with the backdrop of the George Floyd's protests," Ansari said.

The city's accusations of incitement of violence, she said, "say a lot about defendants' mindsets at the time." The renewed public attention to police misconduct cases posed a real threat to their legal battle, particularly as media outlets began to pick up on the parallels between the Floyd and Muhaymin cases.

Throughout 2020, the city kept court documents secret by arguing, in part, that attorneys for the Muhaymin family "intended to use [the documents] to spread misinformation about and incite public disapproval of Defendants," federal judge Douglas Rayes determined in his ruling on the case. On several occasions, the city alluded to the "violence" of the protests against police brutality that were taking place across the country.

"I can't say whether or not [the argument] is something others are using elsewhere," said Michael Selmi, a professor of law at Arizona State University's Sandra Day O'Connor College of Law, "but it strikes me as quite unusual" that any documents would be sealed on that basis — and "raises questions of accountability," he added.

Request after request to seal documents was approved by Brnovich, even when the city provided little rationale.

"We fought every one of their attempts to seal. And, in some cases, the order to seal came down even faster than I could respond to it," Chami said.

However, in September, Brnovich — who is the wife of Arizona Attorney General and U.S. Senate candidate Mark Brnovich — quietly recused herself from the case, without explanation. After New Times contacted her office with questions about the recusal, a federal courts spokesperson said that judges "do not have to provide" rationale behind recusals and that Brnovich had no further comment.

Chami suggested that the recusal could have been related to her husband's position, which frequently draws calls for Judge Brnovich to recuse herself in high-profile cases.

"Her relationship to her husband could potentially influence, or cause an unnecessary distraction to, the defense or the prosecution," Chami said, particularly as he ramps up his bid for Senate.

When the case was passed along to Judge Rayes, he issued a lengthy opinion on the motions to unseal  documents submitted by Muslim Advocates and others. He wrote that, at times, key documents in the case had been sealed without any explanation, and warned the defense to stop submitting "needless" requests to keep documents confidential.

One of those key documents was a ruling by Brnovich that, now unsealed, demonstrates the strength of the Muhaymin family's case against the ten Phoenix officers who responded that day. Brnovich refused to grant qualified immunity — a legal precedent that shields police officers from personal liability if their actions are deemed reasonable, even if they're mistaken  — to four of the officers in the case who used force against Muhaymin.

Selmi also noted that it was atypical to shield a finding of such magnitude from the public. "Being denied qualified immunity," he said, "is a significant thing that I would think the public would have the right to know about."

Those four officers are Dennis Leroux, Ronaldo Canilao, Jason Hobel, and Oswald Grenier. None faced any discipline for their actions that day. Grenier and Canilao have both retired, and Leroux and Hobel are still on the force, according to last year's salary data.

Notably, both Grenier and Leroux had been accused of excessive force previously, as New Times revealed last month. Grenier — who, according to bodycam footage, kneeled on Muhaymin's neck for more than three minutes as the man cried out — was named in a lawsuit alleging that he beat a Latino man without any cause.

The finding, Chami said, could strengthen a potential criminal case against the officers, who Maricopa County declined to prosecute in 2018.

"The denial of qualified immunity," Chami said, "increases the likelihood that a prosecutor could look at the evidence and say, yes, I think I could convince a jury beyond a reasonable doubt."

Chami said that the family — still scarred by the death of a brother and father of two — hopes now to seek justice in criminal court.

This year, on her fifteenth birthday, Muhaymin's daughter Amirah wrote a letter to the U.S. Department of Justice, asking the government to open an investigation into her father's death. "It has been four years since my dad's death and there still has not been justice for him," she wrote.

The family has since been contacted by DOJ investigators, Chami confirmed, as part of the agency's ongoing probe into the city's policing practices. He did not elaborate.

Ansari said she hopes that the newly public records will add force to the family's push for a new criminal investigation. "We're hoping that these documents... show the facts of what happened here in a way that can bring accountability," she said.
KEEP PHOENIX NEW TIMES FREE... Since we started Phoenix New Times, it has been defined as the free, independent voice of Phoenix, and we'd like to keep it that way. With local media under siege, it's more important than ever for us to rally support behind funding our local journalism. You can help by participating in our "I Support" program, allowing us to keep offering readers access to our incisive coverage of local news, food and culture with no paywalls.
Make a one-time donation today for as little as $1.