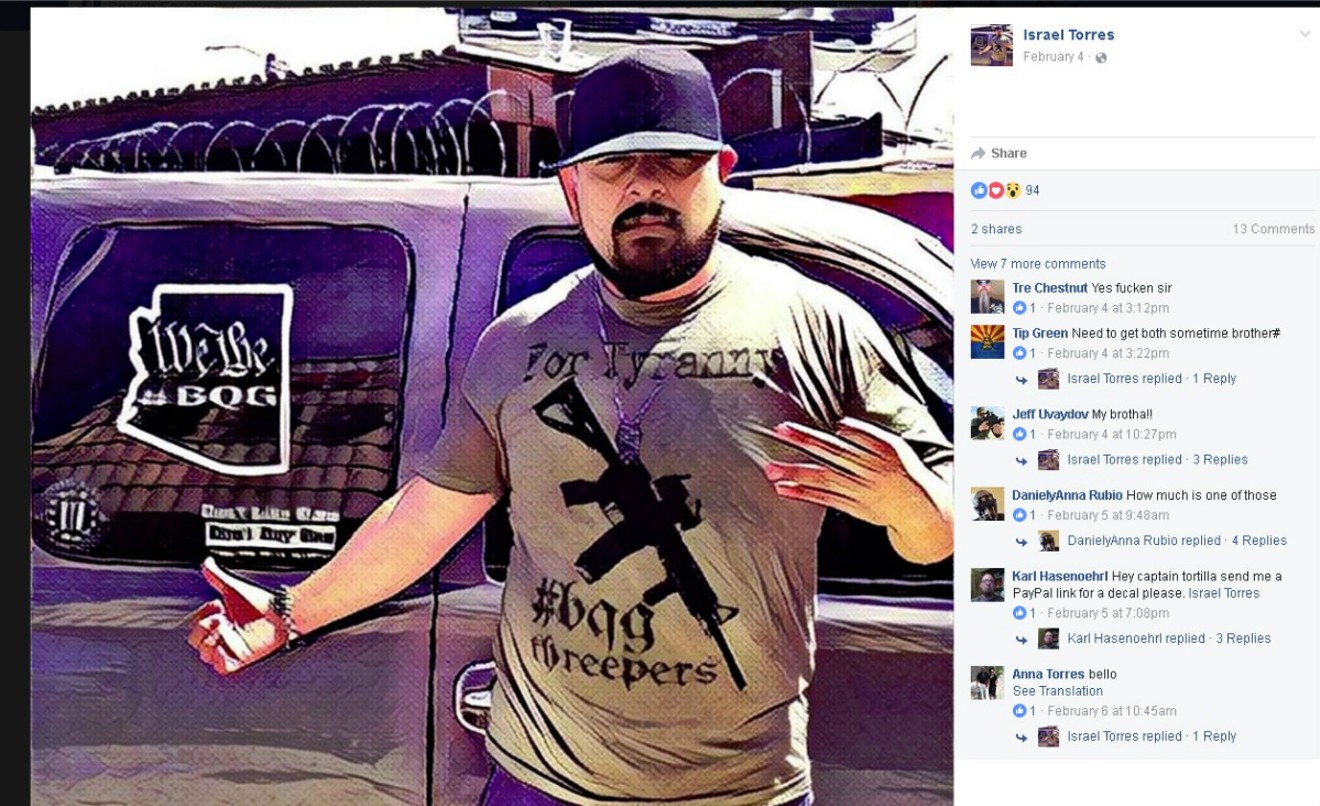 Israel Torres, flashing a hand sign associated with the Three Percenter movement. via Facebook
Social media posts allegedly made by a self-described "Three Percenter" and organizer of a local pro-Second Amendment group called "Barter Quality Goods" or simply #BQG, led to the Phoenix man's recent arrest by federal authorities on charges of being a felon in possession of a handgun.

According to a criminal complaint filed Thursday in U.S. District Court by the U.S. Attorney's Office for Arizona, Israel Torres posted images and videos of a shiny Colt .45 M1911 pistol on Instagram, along with a video of himself shooting the gun.

Which would be par for the course for your average red-blooded Arizona male, save for an affidavit on file with the federal court from FBI special agent Jason Saitta, alleging that Torres, 34, is a two-time felon and therefore prohibited from owning a firearm under federal law.

In videos and photos posted on social media, Torres describes himself as a "Three Percenter" or a "Threeper," labels used by pro-Second Amendment, antigovernment groups that are akin in ideology to the far-right Oath Keepers.

The name Three Percenter refers to a belief among adherents that only 3 percent of the population fought on the side of the patriots against the British during the American Revolutionary War, a claim disputed by historians. 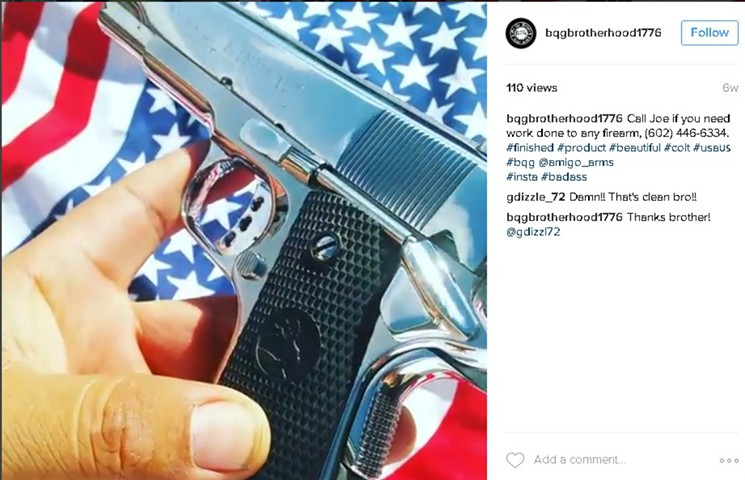 The record of these felonies and Torres' own photos and videos posted to the Instagram account "#bqgbrotherhood1776," writes Saitta, gives him probable cause to believe Torres had violated a federal statute that makes it illegal for a felon to own a weapon.

Saitta's affidavit, which you can read below, is submitted in support of the charge and a warrant for Torres' arrest.

The Phoenix FBI office declined to comment on the case, referring Phoenix New Times to Arizona's U.S. Attorney's Office, which confirmed that Torres is in custody, awaiting a hearing before a federal judge.

Neither agency would say what day Torres was taken into custody. (Note: Please see update below.)

Reached by phone, a member of Torres' immediate family declined comment. However, posts made by members of the Torres family to the private Facebook group #BQGHQ ARIZONA ask for financial help, stating that the "Feds raided his home," confiscating everything "2A related," 2A being shorthand for the Second Amendment.

Through videos on the YouTube account "#BQG FAMILY" and other social media, Torres tirelessly promotes #BQG, which stands for "Barter Quality Goods," a title and abbreviation that Torres had registered as a trade name with the Arizona Secretary of State's Office.

Under "business," #BQG is listed as a "Club-Brotherhood" on the Secretary of State's website.

The group has two Facebook sites, one public and deactivated, and one private and active.

The latter is #BQGHQ ARIZONA, which boasts more than 3,000 members and states in its description that members once were "able to sell firearms personally to other people in AZ" but had been banned from doing so by "the lovely admins of FaceBook." 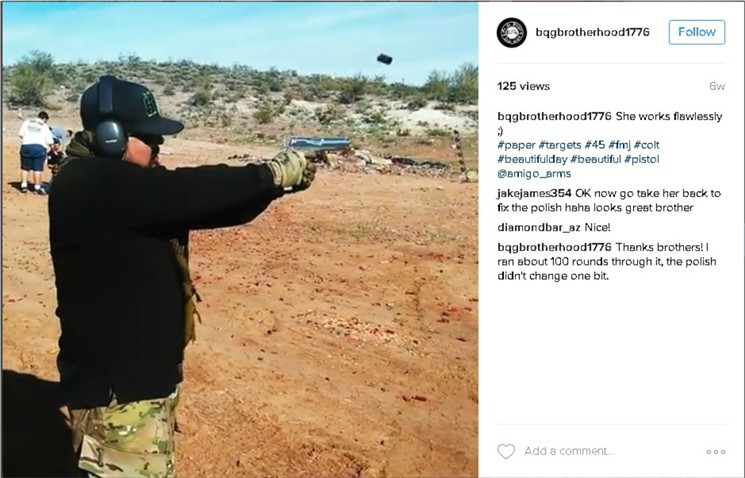 Screenshot from an Instagram video cited in the FBI affidavit.
via Instagram
Torres' group sponsored "shootouts" in the desert where dozens of people would show up to participate in "magdumps," where they emptied the bullets in their gun magazines by shooting them into the distance.

Some of the #BQG videos on YouTube document these events, and show the group doing other fun stuff, like shooting at exploding targets and firing off AK-47s and other long guns.

He also discusses some paranoid beliefs in his videos, shared by other antigovernment activists, and suggests that a government crackdown will lead to martial law and rebellion by his fellow Three Percenters.

He later adds, "If something does happen, if martial law kicks in, we are at risk of getting our guns confiscated."

In other videos, he advises those watching that they should wean themselves from the use of paper money and move toward the barter system.

And he warns of a coming conflict with government forces.

"The federal government has been stepping all over us for quite some time now," he says in a video from January 2016. "There's been multiple attacks on the people and the people are divided."

Torres continues in this vein, wondering when an uprising will happen.

"When are we going to grow a pair of balls and say, `You know what, it's time,'?" he asks in the same 2016 video. "There's never going to be a good enough reason for everybody."

In videos and other social media posts, Torres expresses sympathy with those involved in the 2016 armed takeover of the Malheur National Wildlife Refuge in Oregon, including former Arizona resident LaVoy Finicum, who was shot and killed at the standoff while fleeing FBI agents and Oregon State Patrol officers.

Last year, Torres and other BQG members regularly showed up armed to the protests outside rallies for then-GOP presidential candidate Donald Trump, supposedly to act as a buffer between anti-Trump protesters and Trump supporters.

"We were there to protect the people from any malicious protesters," reads the description from one BQG  video from a Trump rally. "We do not support any politician. We support our freedom from tyranny."

More on this story as it develops.

Update 11:23 a.m.: The court docket for Torres' case has been updated. It states that Torres was arrested Friday, February 17, and had his initial appearance before a magistrate on the same day.  A public defender has been appointed to Torres, and a preliminary hearing has been scheduled for Thursday morning. Meanwhile, he continues to be detained.

Update 7:40 p.m.: The private Facebook site #BQGHQ ARIZONA mentioned above seems to have been taken down. A message from one of the administrators to group members states that, "Per request of the Torres family we have decide [sic] to close down BQG for the time being."

Read the FBI affidavit of probable cause for Israel Torres' arrest.