Has I-10 Become Arizona's Most Dangerous Highway? 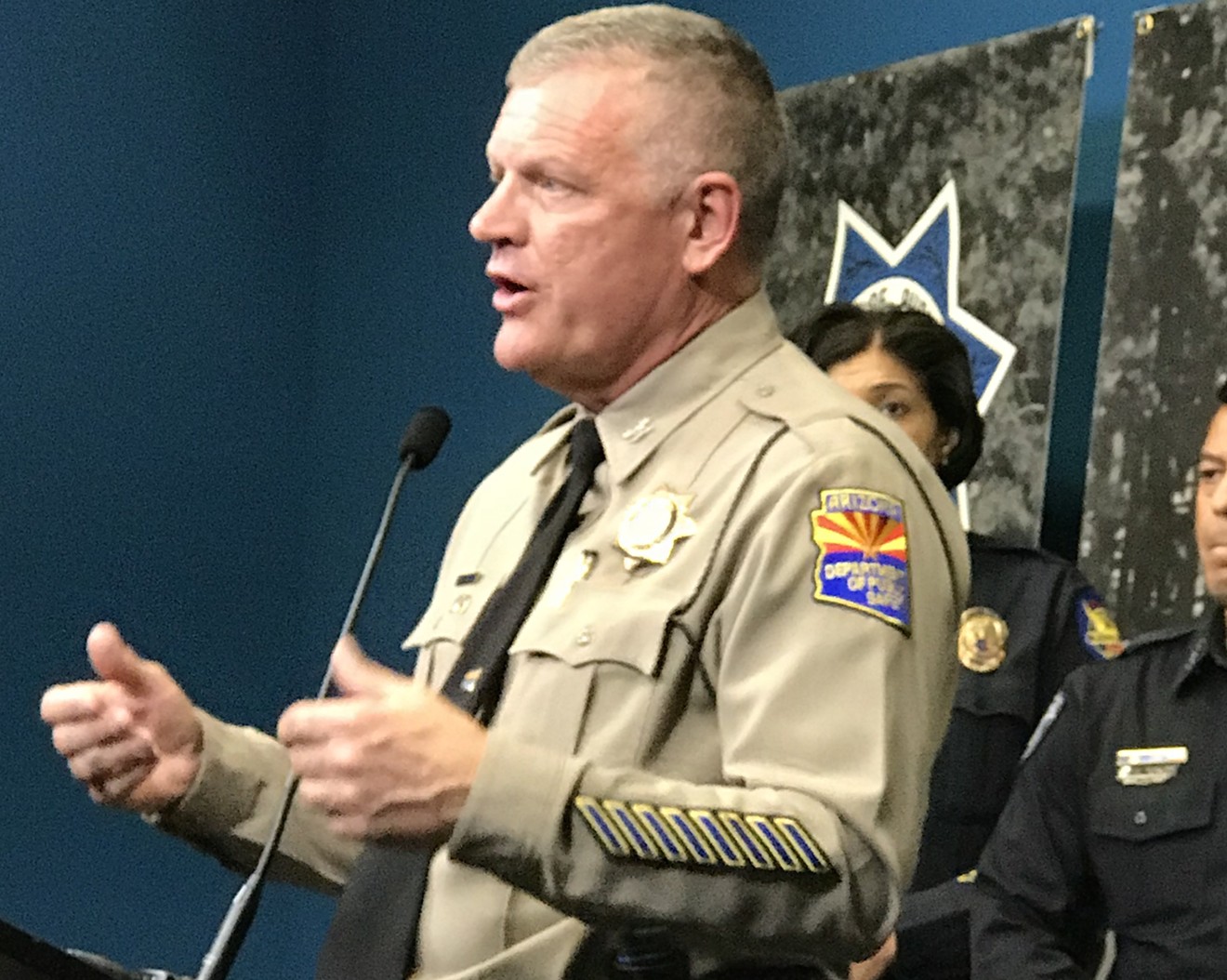 Arizona Department of Public Safety Director Col. Frank Milstead explains the rash of recent gun violence on Interstate 10 at a November 29, 2017, press conference. Sean Holstege
New details are emerging about a gun battle Tuesday at a freeway rest stop on the way to California, more trouble on what may be Arizona's most dangerous stretch of highway.

The shootout and its aftermath closed Interstate 10 for seven hours and is part of an alarming rash of ultra-violent incidents there.

Half a dozen local, state, and federal law enforcement agencies, including the Arizona Department of Public Safety and Phoenix Police Department, swooped on the rest stop near Quartzite to bring down a fleeing murder suspect. Over the course of half an hour, authorities fired 300 rounds at the suspect, DPS Director Col. Frank Milstead told reporters Wednesday.

The suspect, 36-year-old Sladjan Petkovic, is on life support and is not expected to survive, Milstead said.

No officers were injured.

The incident highlighted the recent perils of I-10 in the deserts between Phoenix and the Colorado River. It was the third high-profile police shooting incident there in 10 months.

“These things have happened more and more,” Milstead said, remarking that Wednesday’s was just the latest press conference in which he and Phoenix Police Chief Jeri Williams were explaining gunplay on I-10.

Authorities were at a loss to explain what it is about Quartzite, Tonopah, I-10, and gunmen. The freeway is the only coast-to-coast interstate along the southern part of the country, and it links some of America’s biggest and most violent cities.

DPS deliberately patrols the rest stops, which ADOT designed with safety in mind, Milstead suggested. Top brass at DPS and the La Paz County Sheriff’s Office ventured that they are in daily contact to adjust staffing levels along that stretch of I-10, but acknowledged resources are perennially thin.

The latest incident began Monday, when Phoenix police said they started  looking for Petkovic after reports Monday around dinnertime of a shooting near Broadway Road and 99th Avenue.

Police arrived at the 10000 block of West Levi Drive to find 45-year-old state prison official Steven Arvallo bleeding from multiple gunshot wounds on the sidewalk. He was taken to hospital, where he died. 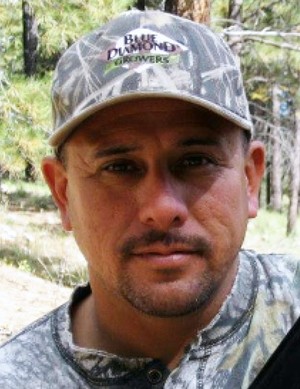 Long time state corrections official Steven Arvallo, who was shot dead on the evening of November 27, 2017, in the Tolleson area.
Courtesy of Arizona Department of Corrections
Police believe the shooting was over an ongoing dispute between the two men over parking.

Investigators learned that Petkovic fled in a grey Jeep Cherokee and DPS issued a bulletin to look for the suspect’s car.

Shortly after that 1:50 a.m. alert, somebody called 911 and reported a shooting on the I-10 at milepost 63, about 70 miles west of the Tolleson area shooting.

A truck driver was injured from the breaking glass in the shooting, Milstead said.

Soon afterward, a DPS trooper found Petkovic standing outside a car by the highway 11 miles to the west at a rest stop.

Petkovic was shot and wounded in the firefight and taken to hospital, where he remains on life support.

Two months ago, on September 13, a shootout began at milepost 57, five miles from Tuesday’s battle.

A DPS trooper pulled over a blue Ford Mustang with an invalid license plate. During the stop, a passenger got out of the car and shot at the trooper, according to a DPS statement. The officer returned fire.

At that point, the suspect peeled out and bombed west toward Quartzite. There, he exited 40 miles away.
Responding troopers, La Paz County sheriff’s deputies, and Border Patrol agents found the Mustang and chased it another six miles. A gunfight ensued.

The suspect then jumped out of the car, ran across the highway, broke into a truck, assaulted the driver, and took off going back east toward Phoenix. He exited at the same off-ramp at milepost 17.

He drove toward Main Street, where police stopped him yet again and yet again another gunfight erupted. This time the suspect was shot and mortally wounded.

He later died in the hospital.

Good guy with a gun Thomas Yoxall (left) and state DPS Director Colonel Frank Milstead (right) earlier this year.
Arizona Department of Public Safety
Eight months earlier and 24 miles to the east, state trooper Ed Anderson responded to a call at around 4:20 a.m. on January 13 from a motorist saying somebody had been shooting at his car.

Anderson pulled up to the scene of a rolled-over car and an injured woman, who later died. As he approached somebody in the murk shot him in the shoulder, taking away the use of his right hand.

The trooper and his attacker brawled. At one point, the suspect smacked Anderson’s head on the pavement.

At that moment, 43-year-old Thomas Yoxall, on the way to California with his wife, showed up and asked Anderson if he needed help. He did.

Yoxall went to his car, pulled out a gun, and told the suspect to stand down. The suspect refused. Yoxall shot him dead, DPS said.

Then Yoxall got on Anderson’s radio and called in help. Anderson went to the hospital, went under the knife, and recovered.

Of course, you don’t have to be out in the desert to be familiar with shootings at vehicles on I-10. Metro Phoenix residents know all too well.

You could forgive Milstead for not wanting to face news crews to talk about shootings on Interstate 10, but that’s exactly what he did Wednesday.

In September 2015, he told the press his state troopers had arrested the man they suspected of being the Serial Freeway Shooter, a man who had terrorized the city for two weeks.

Problem was, detectives could say only that a gun belonging to the suspect matched ballistics found at four of the shootings. They couldn’t put the gun in his hand or him at any of the crime scenes. The evidence was necessary, but not sufficient.

Worse still, the ballistics were off. Lab technicians goofed and the case fizzled out. The suspect, Leslie Merritt Jr., who had always maintained for the cameras his innocence, has sued DPS for millions of dollars. The case is still winding its way through court.

The shooter was never caught.

All of which makes freeway shootings a touchy subject around the DPS headquarters across the street from the State Fairgrounds.

On June 2, reports came in that somebody near Verrado Way on I-10 was shooting at trucks. It didn’t quite turn out that way.

According to the official police report, which  Phoenix New Times obtained under a public records request, DPS responded to a dirt field in Buckeye where a California truck driver was waiting.

The trooper looked into the cab of the red semi and asked the 46-year-old trucker what happened.

“I’m not sure. I was driving along and something smacked the back of my leg,” the trucker said, sweating heavily.

The trooper noticed a hole in the trucker’s left shin and a pool of blood on the floor mat.

As paramedics loaded the trucker into an ambulance, the trooper noticed the only one bullet hole – on the inside of the cab, down by the floorboards.

A search warrant revealed a 9 mm handgun tucked under the driver’s seat and two shell casings hidden in the trucker’s backpack.

Now back at the headquarters, the trucker told a different story. Two actually. 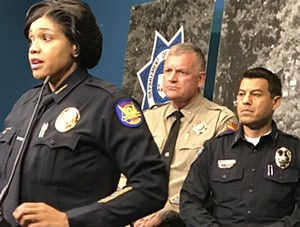 Phoenix Police Chief Jeri Williams tells reporters about an I-10 gun battle involving a fleeing murder suspect this week, as DPS Director Col. Frank Milstead (center) watches, on November 29, 2017.
Sean Holstege
First, he said he had the gun in his hand and it just went off, when a truck next to him blared its horn. When he saw the blood, he panicked and the gun went off again as he tried to knock the magazine out.

That’s when DPS detectives read him his rights.

This time, the trucker said the gun was his mother’s. He got it after she died of cancer. Somewhere between Jackrabbit Road and Verrado Way, he got to thinking he wanted to hurt himself. He was tired. He’d also lost four uncles and a grandmother. Things had been rough.

The gun went off by accident. He didn’t really want to hurt himself because he had to take care of his family.

Turns out, the trucker had been twice convicted of drugs felonies back in Bakersfield, and he wasn’t allowed to have a gun.