Aaron Juan Saucedo was already in jail when he was first linked to the Serial Street Shooter killings. Phoenix Police Department

Deputy County Attorney Juan Martinez has been granted more time to decide whether to seek the death penalty for suspect Aaron Juan Saucedo for the first murder that police say kicked off the Serial Street Shooter slayings, according to court filings reviewed this week.

More than a month has passed since the Phoenix Police Department named Saucedo, 23, as the man responsible for a dozen shootings and nine deaths in 2015 and 2016.

So far, Saucedo has only been charged with the murder of his mother's boyfriend, Raul Romero. County prosecutors are biding their time before seeking charges in the other eight deaths.

If convicted of all nine murders, Saucedo would share the distinction with Baseline Killer Mark Goudeau as the deadliest serial killer in Arizona history. 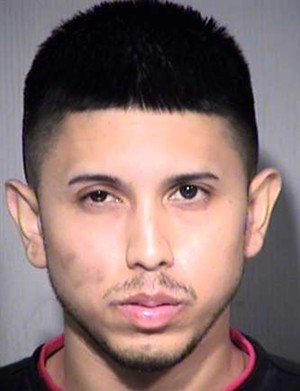 Aaron Juan Saucedo was already in jail when he was first linked to the Serial Street Shooter killings.
Phoenix Police Department
Typically, the team of prosecutors reviewing a case gives itself 30 days to file charges, Martinez’s boss, County Attorney Bill Montgomery told reporters the day after Saucedo was named. That arbitrary and informal deadline came and went last week, to much media musing.

The reporting pack paid less attention to Martinez’s motion on May 30, when he asked a judge to give him 60 more days to declare if he would seek the death penalty. The judge granted the request.

Martinez has a courtroom reputation for being brash, sarcastic, and aggressive. Some defense attorneys would add sneaky to that list, but Martinez is unapologetic. He’s trying to win and take a brutal killer off the streets, he often says.

He earned an international reputation and legions of critics and admirers for putting boyfriend-killer Jodi Arias away for life in a sensational 2013 trial.

In the Saucedo case, his legal filing did not explain his thinking.

What comes closer to explaining the case against Saucedo is another recent court record outlining the possible witnesses.

In the motion filed June 5, prosecutors say they could call any of three dozen Phoenix cops, detectives, and crime-scene specialists.

In addition, prosecutors listed employees of two pawnshops on Indian School Road in Phoenix. One was Mo Money Pawn, where police said they traced a 9 mm Hi-Point pistol used in Romero’s shooting.

But authorities revealed for the first time publicly that Windy City Pawn Shop, just over a mile to the west, also played some role in the case.

Nothing hints at the possible significance of the second pawn shop. In court documents filed to establish that police had sufficient evidence to hold Saucedo for the other 11 shootings, police said their suspect used three guns. They did not say where he bought them.

Also June 5, authorities listed an employee at First Transit. Saucedo worked there as a city bus driver in 2015 and received a traffic ticket after being caught on camera running a red light.

Police said unidentified coworkers recognized Saucedo from the artist’s sketch they released a year ago. He apparently left that job around the time police first questioned him in December. Court records at the time of his April arrest showed he was a laborer since around the new year.

Prosecutors disclosed as possible witnesses a man who lives about three miles east of most of the killings, and another who lives near Interstate 17 and Camelback Road.

Two men living near the crime scene at 920 East Montebello Avenue in central Phoenix also likely will be called as witnesses. Saucedo’s mother, Maria Saucedo-Ramos and two women with her dead boyfriend’s surname were also listed.

In filings earlier this week, Saucedo's lawyers began mounting a defense for the only crime he's been formally charged with, Romero's murder.

Saucedo’s team says that the state lacks evidence, that he didn’t do it, and that he was mistakenly identified. They also say he has good character and lacked motive.

So that lone case against Saucedo churns slowly toward trial. And the case involving the murders of eight other victims? Watch this space, as they say.