Physicians on a Mission, Phoenix Surgeons Save Lives in Mexico for Free A nurse guides him through the shadowy, meandering hallways where yellow paint peels from stucco walls before he arrives at a door labeled “Quirófano,” Spanish for operating room.

It’s a sunny Saturday morning in early summer, and ritzy resorts in the Sonoran town of Puerto Peñasco, or Rocky Point, are already booked full with tourists from Arizona. But the town has another side, one that's defined by poverty and all that comes with it. 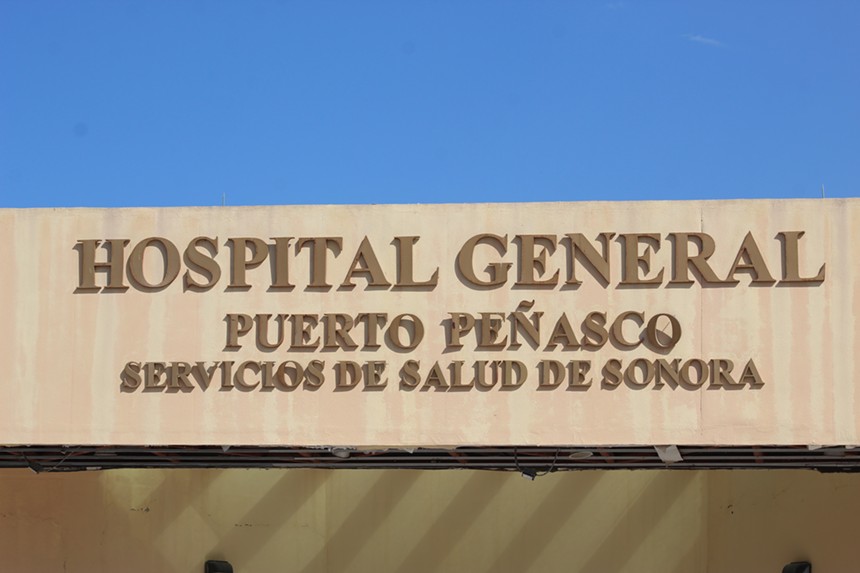 Phoenix surgeons perform more than $1 million worth of surgery per day for free at Hospital General Puerto Peñasco in the Mexican state of Sonora.
Elias Weiss
The average monthly salary in Puerto Peñasco is just $290. Close to half of its residents didn’t graduate high school and most houses don’t have internet access, according to Mexican government economists.

That’s why a team of surgeons from metro Phoenix makes the quarterly pilgrimage to the Mexican fishing town known for its dune-backed sandy beaches and tidal pools of Bahía la Choya.

The surgeons aren't there to hang glide or drink a michelada at the swim-up bar. They’re performing more than $1 million worth of surgery per day on patients like Hernández — for free.

From his hands to his neck, nearly every square inch of Hernández’s skinny frame is tattooed. He bows his head and doesn’t say a word as doctors administer spinal anesthesia. The beveled tip of the hypodermic needle pierces the image of a devilish goat on his back. 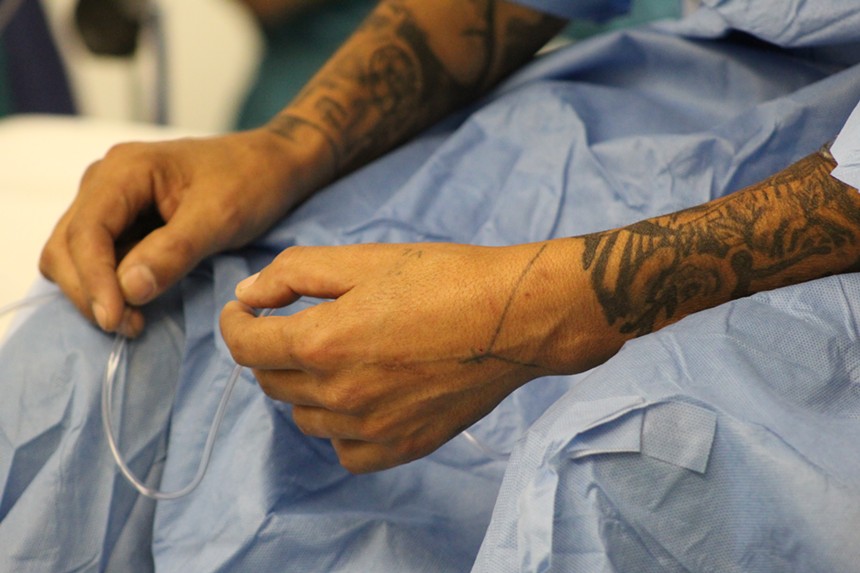 Tomás Hernández waited years for a vital operation. Without a partnership between Creighton University School of Medicine in Phoenix, the Osorio Foundation, and Hospital General de Puerto Peñasco, he might never have been able to afford it.
Elias Weiss
Moments later, Hernández is unconscious. He’s endured years of pain waiting for a hydrocele removal surgery. It's an agonizing pool of fluid that collects in the scrotum, uncommon in adult men, and requires surgical removal.

“Most of them are waiting 10 years for treatment because they have no money,” said Dr. Adan Larez, a private practitioner in the Mexican border town of Sonoyta, the port of entry on the way to Rocky Point.

He switches between English and Spanish as he divulges the plight of his patients, who are often too poor to afford the care they need.

Larez refers his patients to Hospital General de Puerto Peñasco, 62 miles to the south, because he knows they have no other chance to receive American quality health care.

It’s an opportunity most people in the indigent towns of northwestern Mexico will never be offered. And it’s thanks to a partnership between a Mesa nonprofit and a new medical school in Phoenix. Despite a language barrier, Dr. Adan Larez (left), a physician from the Mexican border town of Sonoyta, works on an operation with Mesa-based Dr. Joseph Abdo for free at Hospital General de Puerto Peñasco on Saturday.
Elias Weiss
Creighton University School of Medicine was founded in Omaha, Nebraska in 1892 and opened its midtown Phoenix campus last year.

It didn’t take long for the medical school to join forces with the Osorio Foundation, a nonprofit originally set up in 2015 by gynecological surgeon Dr. Raul Osorio in Mesa to improve the quality of health care in Peru.

The organization's mission is to save lives, improve health care, and provide medical training to local residents in impoverished Latin American countries. It pulls in about $50,000 every year in donations, according to 2020 filings with the IRS. The money is spent on medical supplies in Mexico and Peru, Osorio said.

Together with a handful of private practitioners from across the Valley, the coalition can perform nearly any nonelective surgery on patients like Hernández and Victoria Ibarra, an 8-year-old from Sonoyta who was born with a congenital condition that left the fingers on her right hand fused together.

She has waited her entire life for surgery. Her mother, Lupita Ibarra, spent more than $3,000, nearly a year’s salary before taxes, on an operation last summer that was ineffective and left the family penniless.

That nightmare came to an end on Saturday.

Victoria is in second grade, and some of her classmates bully her because of her hand.

“This will help her be more social and not to be ashamed of her hand,” Lupita Ibarra said in Spanish. “We could not afford any more surgery.”

She dreamed of first-world health care for her daughter but always thought it was just that — a dream.

“Last time during recovery, she was crying in pain,” Victoria's mother said. “This time, she is calm and there is no pain. Everything is better.”

That was Osorio’s goal when he began traveling to Puerto Peñasco last year. He was inspired by another American doctor who opened a free clinic there during the coronavirus pandemic.

Since the 1980s, Osorio has done similar work in his native Peru.

“We give care to the very needy people,” Osorio told New Times. “Some of them don’t have money to eat.” 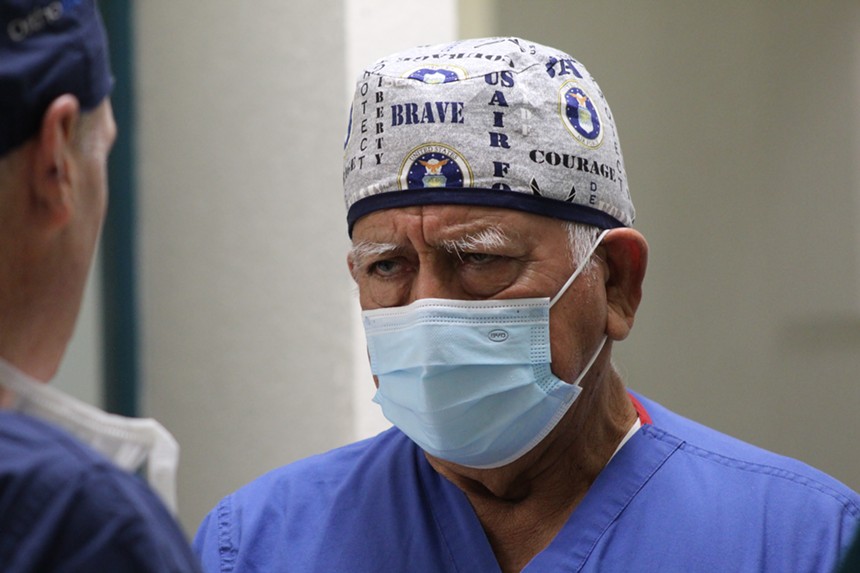 Dr. Raul Osorio (right), a gynecological surgeon from Peru, discusses an operation with Phoenix anesthesiologist Dr. Floyd Roberson. Osorio set up a nonprofit in Mesa that recently began working to improve the quality of health care in the Mexican state of Sonora.
Elias Weiss
Phoenix-based doctors George Stavros, a family medicine specialist, and Floyd Roberson, an anesthesiologist, have run missions to Puerto Peñasco for decades. The former hospital director, Francisco Javier Carrillo Ruiz, vetted each American doctor before allowing them to practice there.

Now the two-man operation has turned into a scrappy team of Arizona’s finest doctors putting ill-starred patients under the knife.

“We knew each other from Phoenix,” Osorio said. “Now, we’re like a family.”

Micaela Jensen, an onsite specialist with Stryker Endoscopy in Scottsdale, donated a laparoscope, the fiber-optic instrument used to view the organs in the abdomen, to Hospital General de Puerto Peñasco. St. Joseph’s Hospital in Phoenix donated other supplies.

Now in its second year, Creighton’s medical school in Phoenix already numbers 100 students in each class. A select group of students joins seasoned doctors on treks south of the border.

Officials at the school are working to bring Mexican students to the United States, and are slated to sign an agreement with Hospital General de Puerto Peñasco to become official partners.

In its infancy, the program has “had ups and downs because of politics,” Osorio said.

Corruption has managed to get its claws into the hospital as it has in many other Mexican institutions.

“There was one case in which a third party was charging patients,” Osorio said. “That’s fundamentally wrong. This is a free hospital.”

A Creighton University School of Medicine student from Phoenix prepares a syringe ahead of surgery at Hospital General de Puerto Peñasco on Saturday.
Elias Weiss
The young coalition of seven doctors is still finding its way. But things are getting better, even on a shoestring budget.

“I know there’s cartel action here. It feels so foreign,” Dr. Brian Wilhelmi, a Phoenix anesthesiologist who went on the mission, told New Times. “But it’s not all like that. There are a lot of positive stories here, and it’s important to capture that.”

Hospital General de Puerto Peñasco waited more than five years for a $465,000 endowment just to finish constructing the facility last year. It's a tiny fraction of the resources U.S. hospitals can muster.

Still, there’s something to be learned in Mexico, even for American doctors.

During surgery on Saturday, Dr. Abdo, the general surgeon in Mesa, didn’t have the luxury of bathing his medical needle holder in antibiotic solution. The needle driver was also bigger than he’s used to using.

But the doctors make do with the resources available to them. It’s an exercise that benefits hardened doctors and medical students alike because the techniques used in scarcity sometimes work even better than traditional methods, Wilhemli said.

“Everything is not handed to you like in the United States,” he said. “It gets the students away from books and studies, and gets them to perform similarly under incredibly different circumstances with a major lack of resources.” Dr. Joseph Abdo (right), a general surgeon in Mesa, performs surgery at Hospital General de Puerto Peñasco on Saturday morning.
Elias Weiss
For the students from the United States, which “without a doubt, is the best country to study medicine” according to the Global Scholarships nonprofit, there’s an obligation to serve — to bring American health care to wanting countries.

“There’s a good humanitarian factor,” Wilhelmi said. “You want to teach young physicians the value of doing things, not for a price, but because it's the right thing to do. Instilling that early on in someone’s career really brings about that sense of service.”

From here, the coalition will only grow. It looks to expand into the Sonoran capital city of Hermosillo and beyond into Central and South America.

“We’re building a community between different countries,” Wilhemli said.
KEEP PHOENIX NEW TIMES FREE... Since we started Phoenix New Times, it has been defined as the free, independent voice of Phoenix, and we'd like to keep it that way. With local media under siege, it's more important than ever for us to rally support behind funding our local journalism. You can help by participating in our "I Support" program, allowing us to keep offering readers access to our incisive coverage of local news, food and culture with no paywalls.
Make a one-time donation today for as little as $1.
Elias Weiss is a staff writer at the Phoenix New Times. A native of Charlotte, North Carolina, he reported first for the Northwest Arkansas Democrat-Gazette and was editor of the Chatham Star-Tribune in Southern Virginia, where he covered politics and law. In 2020, the Virginia Press Association awarded him first place in the categories of Government Writing and Breaking News Writing for non-daily newspapers statewide.
Contact: Elias Weiss
Follow:
Twitter: @ecweiss