Can Winslow's New Police Chief Turn Around the Troubled Department? 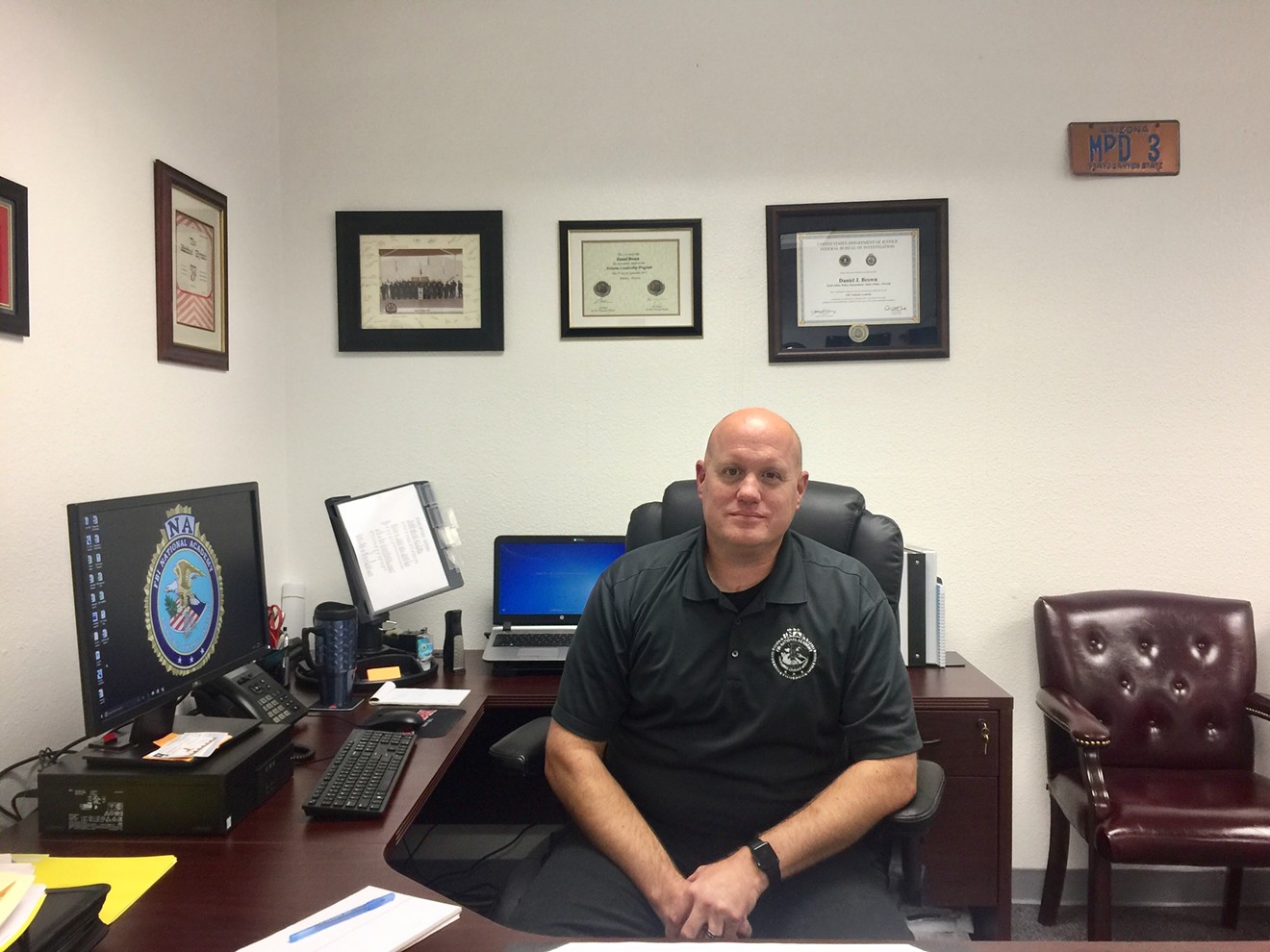 That's the first thing that Daniel Brown, the city's new police chief, says upon sitting down for an interview with Phoenix New Times. Unprompted, he turns to his computer and pulls up a set of architectural drawings that he plans to present to the city council.

Currently, the Winslow Police Department occupies part of an old Bashas' supermarket. The covered-up windows and the weeds growing in the parking lot make it easy to assume that the building is completely abandoned. It doesn't even have a flagpole. ("What government building doesn't have a flagpole?" Brown asks.)

His vision, laid out in the architect's sketches, involves fixing up the building and making the mostly empty parking lot into something that resembles a city park with trees, sculptures inspired by Navajo artwork, and a gazebo topped with a larger-than-life replica of the Route 66 sign.

It's not exactly a mystery why the Winslow Police Department would want to improve its image. In March 2016, Officer Austin Shipley shot and killed 27-year-old Loreal Tsingine, a petite Navajo woman who had been accused of shoplifting two six-packs of Bud Light from the Circle K. Afterward, reporters got hold of records showing that Shipley's aggressive behavior had been a concern before he was even hired.

Then, the police chief at the time, Stephen Garnett, announced plans to retire. Officially, his departure had nothing to do with Tsingine's death. But it left plenty of people in Winslow feeling like the department lacked leadership — and, more importantly, accountability.

In May of this year, Brown, who has 19 years' experience in law enforcement, took over. Previously, he'd been in charge of the police department in St. John's, an hour and a half away. He and his wife were happy there and had no plans to leave.

Then, Winslow's interim chief, Chris Vasquez, asked for his help selecting someone to lead the department.

"I sat in on the panels, and listened to these guys from out of state, and I felt like they might have been a little out of touch," Brown recalls. "It's no secret that Winslow has had a lot of issues."

Vasquez called him later that week and told him that they hadn't chosen anyone. He suggested that Brown apply for the job.

"I knew that there was a lot of good officers out here," Brown says. "And, you know, I think it's wrong for us to blanket an entire organization as bad based on the actions of a few people — the rotten apples, or whatever. They need to be held accountable for their actions, and at some point they need to leave our profession. That's the way that I look at it. When you look at an organization like Winslow, I knew it would be a challenge. But I'm a pioneering spirit, if you will. I believe in building things."

Perhaps his biggest challenge will be trying to gain the trust of people in the Navajo community who saw Tsingine's death as part of a much larger problem. As New Times's cover story this week details, Native Americans are killed by police at a higher rate than any other racial group. They also report other, less lethal, forms of discrimination, like being pulled over for "driving while Native."

Since taking over in May, Brown has tried to mend that relationship by attending Navajo Nation Human Rights Commission's meetings, as well as chapter house meetings in several of the communities near Winslow.

Brown says he's requiring his command staff to attend chapter meetings on the reservation, and plans to introduce cultural awareness training. He's also trying to encourage officers to have positive interactions with people they encounter on the street by handing out bottled water, brown bag lunches, and blankets and coats in the winter.

"I certainly think that public trust is rebuilding, but that takes a long time," he says.

Native Americans represented 65 percent of the department's arrests last year, despite making up only a quarter of the city's population — a stunning disparity even when you consider that the surrounding Navajo Nation is nearly entirely Native American. Brown says that those numbers are reflective of the number of calls for service that they receive. Officers aren't doing many traffic stops, he says.

"We have a lot of stabbings, we have aggravated assaults, and a lot of this is Native American on Native American. Unfortunately, you'll see this right after the first of the month — driving in this morning, I saw no less than probably 25 Native Americans out there, just completely intoxicated."

Substance abuse and mental health issues play a role in many of the arrests the department conducts, Brown acknowledges. He says he's working with the city and the Navajo Nation to try and find sources of funding so they can make more treatment options available in Winslow, rather than send the same people to jail over and over again.


Meanwhile, over the past three months, he's been working to improve the department's existing policies.

• Mandating psychological testing for anyone who applies to become a cop.

• Telling officers they should take sick days if they're not mentally prepared to do their job that day.

With many of the changes, it's hard not to wonder, "Why wasn't this happening before?"

Overall, he says, "I told all the employees when I first got here that everything that we do in law enforcement has to be moral. It has to be ethical. And it has to be legal."


During the past 90 days, he says, "There's been a couple of internal investigations already, and we've disciplined people. That's what leads to public trust — transparency and holding our people accountable.