Ozone Pollution in Phoenix Can't Get Much Worse From Climate Change Loretta Mickley, senior research fellow in chemistry-climate interactions. Harvard School of Engineering and Applied Sciences
Ground-level ozone, an invisible air pollution that has an effect likened to sunburn for the lungs, gets worse when it's hotter, according to experts. That effect has profound implications when linked to climate change, which predicts generally increased temperatures over time.

It's yet another reason why Phoenix is toast when it comes to climate change, right?

Studies show that mid-90s temperatures and higher result in "ozone suppression," according to Harvard University researchers.

The effect means climate change won't make the ozone problem in metro Phoenix and Tucson much worse, which is good news considering the Valley just got an "F" in air quality by the American Lung Association's annual State of the Air review.

The widely reported review noted the effect of climate change prominently, saying that a hotter world would cause more ozone pollution and particulates in the air from wildfires and dust. The last three years were the warmest three years on record globally, said JoAnna Stauffer, director of advocacy for the American Lung Association. "In a lot of our counties across the country, they did record higher spikes in ozone, and particle pollution," she said. "So we do believe that climate change increases the risk for air pollution."

Heat is a factor in the formation of ozone pollution, though not directly. 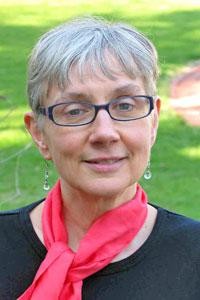 Loretta Mickley, senior research fellow in chemistry-climate interactions.
Harvard School of Engineering and Applied Sciences
Ground-level ozone forms when the precursor chemicals mix in the air and sunlight with other chemicals, including volatile organic compounds (VOCs) and nitrogen oxide (NOx), which spew out of the tailpipes of vehicles that run on fossil fuels and are emitted from industrial sources. Higher heat tends to trigger more ozone formation, because it exacerbates the production of these precursor chemicals, said Timothy Franquist, air quality director of the Arizona Department of Environmental Quality.

Heat causes plants to emit more precursor gases, as Franquist explained, and on hotter days, the extra load on energy systems by air-conditioning systems, including those in cars, mean engines are working harder and emitting more ozone-forming chemicals.

"If it's hotter outside, you're going to have more VOC generation," Franquist said, adding that an increase in temperature because of climate change could be a factor that causes more ozone pollution.

Yet the relationship between heat and ozone has its limits, scientists have found.

Scientists first observed the positive effect of high heat on ozone at some sites in California. According to a 2010 study, extreme temperatures reduce the formation of two key chemicals that help form ozone pollution: Heat shuts down plants' ability to produce as much isoprene, and the atmospheric system loses its ability to make an ozone precursor chemical of peroxyacetyl nitrate, a chemical formed from combustion emissions and also from natural sources.

Researchers tested this effect in air-quality models across the country in a study published in March 2016. The main thrust of the study was to model how high-ozone days may increase between now and 2050 in much of the United States. Overall, the study found that in most air-quality measuring sites in the country, "ozone episodes" would increase in the coming decades by an average of 2.3 extra days of these episodes, with some areas likely to experience an extra three to nine days or more.

However, the study found that, "in fact, temperature is not the best predictor for ozone episodes in most of Arizona," said Loretta Mickley, senior research fellow in chemistry-climate interactions for Harvard's John A. Paulson School of Engineering and Applied Sciences.

She cautioned that suppression doesn't mean that ozone levels are reversing in high heat or that extreme heat protects us from ozone. Rather, extreme heat stymies ozone formation — the ability of the atmosphere to make ground-level ozone reaches its peak when the temperature goes from high to extreme heat.

That adds up to what Mickley called a "modest response" for ozone production in Arizona over the coming decades because of climate change. The Phoenix area might have one or two more bad ozone days by 2050, while places like New Jersey would see nine to 12 more such days, she added.

A map created by the researchers displays the effect with color-coded dots and triangles. In it, the Phoenix and Tucson areas are covered in black triangles and green dots, which indicate lesser change in ozone pollution by 2050 because of climate change.

The triangles show "that the relationship between extreme ozone levels and temperature was not very strong at many sites in Arizona," Mickley said. "That means that it's not clear that extreme ozone will get even worse if temperature goes up more."

Don't think this means you can drive your car more without adding to ozone in the summer, or refuel your with gasoline during the daytime instead of at night, when sunlight isn't around to turn the VOCs in escaped fumes into ozone pollution. According to Franquist and the Arizona DEQ, the ozone produced because of vehicles is the biggest problem, and it's the most controllable. If 10 to 20 percent of Arizona's workers decided to telecommute instead of drive their cars each day, he said, the positive effect would overwhelm other causes of ozone pollution.

But Maricopa County continues to be one of the fastest-growing regions of the country, and all signs point to increasing numbers of "vehicle miles traveled" in metro Phoenix, which means more, not less, pollution from cars.

While the region's air quality has gotten better over the years, the Lung Association's "F" rating is a reminder that the air here is some of the most unhealthy in the country.

Below: The map produced by Harvard researchers that shows areas where ozone pollution is likely to get worse because of climate change. Arizona, fortunately for residents' lungs, shows a lesser effect. 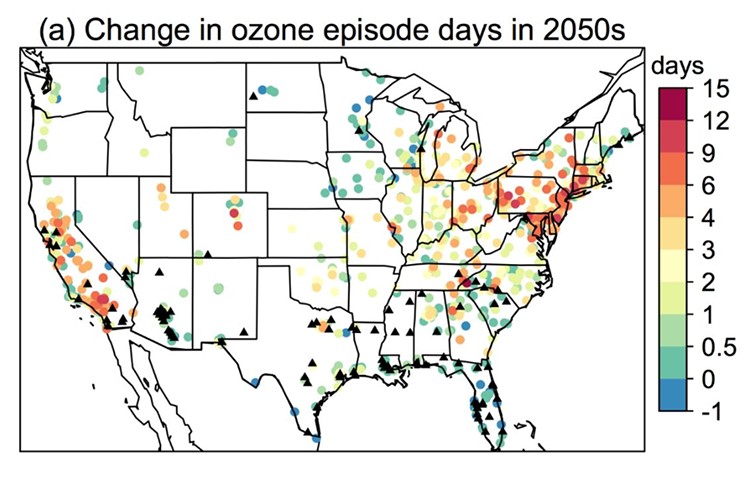 Black triangles show areas where the relationship between increased heat and extreme ozone levels is not very strong.
agupubs.onlinelibrary.wiley.com/doi/full/10.1002/2016GL068432
Correction: The name of Timothy Franquist, director of ADEQ's air quality division, was originally misspelled in this article. We regret the error.
KEEP PHOENIX NEW TIMES FREE... Since we started Phoenix New Times, it has been defined as the free, independent voice of Phoenix, and we'd like to keep it that way. With local media under siege, it's more important than ever for us to rally support behind funding our local journalism. You can help by participating in our "I Support" program, allowing us to keep offering readers access to our incisive coverage of local news, food and culture with no paywalls.
Make a one-time donation today for as little as $1.