Chief Ramon Batista Ray Stern
The parents of a 21-year-old man who was shot and killed by Mesa police last year filed a wrongful death lawsuit against the city on Friday. Patricia and Caesar Lopez allege that police unnecessarily used lethal force against their son, Anthony, and are demanding a jury trial and damages from the city.

Around 3 a.m. on July 21, 2018, Anthony Lopez was driving near the intersection of Dobson Road and Southern Avenue in Mesa when police officers Heath Carroll and Jena Thranum pulled him over.

Lopez's parents say their son suffered from a seizure disorder. "On information and believe, [Lopez] had a seizure immediately prior to and/or during this incident. During the traffic stop, Carroll shot [Lopez] multiple times without justification or cause."

While the complaint is sparse on details, and attorneys for the family did not immediately respond when asked for more information or to speak with the family, news reports from the time of Lopez's death indicate that Carroll shot Lopez after he allegedly hit the officer with his car.

According to a notice of claim filed with the city of Mesa this past January, the family is seeking in excess of $3.5 million for wrongful death damages, funeral and burial expenses, attorneys' fees, and loss of financial support.

"Mr. Lopez had a close relationship with his mother and father. Mr. Lopez lived with his mother," the notice of claim states. "Mr. Lopez and his mother spent portions of every day together during Mr. Lopez's life, which was cut short by the actions of the City of Mesa."

Last July, a spokesperson for the Mesa police department, Steven Berry, said officers stopped Lopez on suspicion of driving while intoxicated. According to Berry, Lopez "refused to follow directions during the traffic stop" and put his car into reverse, injuring Carroll and hitting a patrol vehicle.

Carroll had been holding his stun gun when Lopez's vehicle started reversing. But he dropped the stun gun and drew his firearm after he was struck in the leg, Berry said. Then he shot at Lopez, hitting him at least once.

Lopez was treated at the scene, then taken to a hospital, where he died. The officer was also taken to the hospital for his leg injury.

Mesa police did not respond when asked to clarify the extent of the officer's injury, whether the department had investigated the shooting to verify that lethal force had been used appropriately, or whether Carroll had ever been disciplined for excessive force in this or any other case.

A statement from the Mesa Police Association at the time of the shooting indicates the officer "sustained minor injuries from the suspect's vehicle."

Lopez's parents allege that shooting their son "was excessive and unreasonable because the officers could step out of the path of [Lopez's] vehicle and because at the time of the shooting, [Lopez] was not armed and posed no immediate threat of death or serious bodily injury to any person. Moreover, there were less-than-lethal alternatives to take [Lopez] into custody."

According to the lawsuit, Mesa police failed to treat Lopez's fatal wounds in a timely fashion and instead handcuffed him after pulling him out of the car. Lopez's parents have also alleged in the lawsuit that Mesa police "knew or should have known [Carroll and the other officers on the scene] had dangerous propensities for abusing their authority and for using excessive force and had a lack of proper training and knowledge regarding the risks of shooting at vehicles and their occupants."

It might be difficult for the family to find out whether Carroll or the other officers do, in fact, have a "propensity ... for using excessive force," since until recently, the Mesa Police Department instructed officers to remove excessive force complaints from their internal affairs files if they were more than three years old. 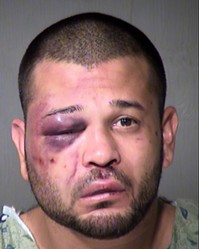 Carlos Pagan's mugshot following his arrest.
Maricopa County Sheriff's Office
"The chief under a prior administration had a policy that under certain circumstances, use-of-force allegations against police officers were purged from the file. You could not even view the past history of an officer's use of force," Romley said. "That's outrageous. You need to be able to see if there's a pattern with these officers. And Chief Batista made a policy decision that that should not occur."

Another source with knowledge of the probe, who asked to stay anonymous, told New Times that it was under Frank Milstead, now director for the Arizona Department of Public Safety, that officers were instructed to remove excessive force complaints from their internal affairs files that were more than three years old. A video obtained by 12News shows Milstead instructing officers to "purge your files" and "make sure the things you don't want in there aren't in there."

Court records indicate that Officer Carroll was accused of excessive force in a complaint filed in Arizona U.S. District Court by a man he arrested. Carlos Miguel Pagan alleged that in January 2018, Carroll "held me down with an unknown officer while officer Trevizo delivered multiple strikes to the right side of my face, as stated by the witness Troy Nicholas Perry."

A mugshot from the day of the arrest shows Pagan had fresh facial injuries.

The suit, filed pro se, was dismissed for failure to state a claim. Pagan spent nine months in jail after pleading guilty to aggravated assault and a dangerous drug violation.
KEEP PHOENIX NEW TIMES FREE... Since we started Phoenix New Times, it has been defined as the free, independent voice of Phoenix, and we'd like to keep it that way. With local media under siege, it's more important than ever for us to rally support behind funding our local journalism. You can help by participating in our "I Support" program, allowing us to keep offering readers access to our incisive coverage of local news, food and culture with no paywalls.
Make a one-time donation today for as little as $1.
Meg O'Connor was a staff writer for Phoenix New Times from April 2019 to April 2020.