Paul Gosar Stripped of Some Responsibilities in House After Violent Video

This resident on Osborn Road in central Phoenix signals displeasure at U.S. Rep. Paul Gosar's latest antic, a violent anime-themed video on Twitter. Congress censured Gosar on Nov. 17, 2021. Sean Holstege
U.S. Rep. Paul Gosar was punished by his colleagues in the U.S. House of Representatives on Tuesday stripping him of his committee assignments after a viral anime video of him murdering vocal Democrats was posted on Twitter several days ago.

The House voted in favor of a resolution to remove him from the Committee on Oversight and Reform and the House Committee on Natural Resources which split along party lines. Legislative committees are powerful positions that enable representatives to influence policy. 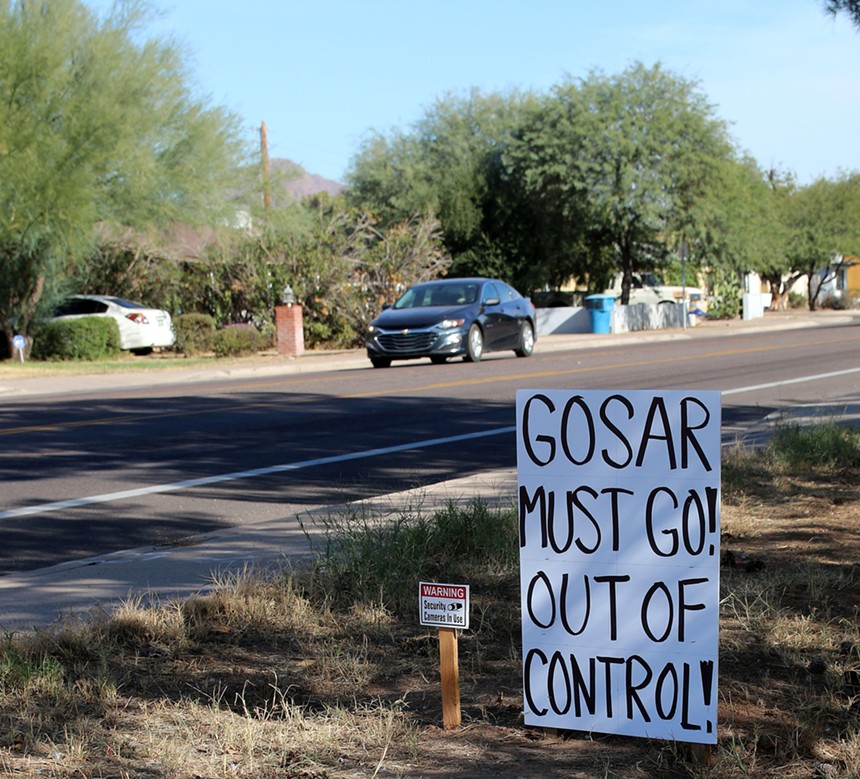 The video clip showed scenes from the popular anime series Attack on Titan where Rep. Ocasio-Cortez is the monster in the film.


It was an anti-immigration motif that included footage of migrants crossing the border between the U.S. and Mexico alongside U.S. Customs and Border Protection officials in helicopters with surveillance devices.

The video was taken down by Gosar's staff.

"I do not espouse violence towards anyone, I never have," said Rep. Gosar on the house floor before the vote.

He described the video as a cartoon displaying a 'policy battle' about immigration policy and that it was meant to connect with a younger audience. He likened himself to Alexander Hamilton as another politician whose speech was censored.

"No threat was intended by my staff or me," he said.

Democrats chastised the Republican for his actions, noting that it was reminiscent of the rioters who broke into the Capitol in January and that he's just fueling the far-right.

“We cannot allow behavior like Rep. Gosar’s to go unchecked — his violent and conspiratorial rhetoric contributed to the insurrection on January 6," said Rep. Ruben Gallego. "His behavior is a danger to Arizonans and our country.”

Meanwhile, a fellow Republican in Florida praised the politician.

"Proud to stand strong with Rep. Gosar — one of the best members in the history of Congress," said Rep. Anthony Sabatini on Twitter. "Although the sick and twisted Left will do whatever it takes to take this man down — the American people are on his side!"
KEEP PHOENIX NEW TIMES FREE... Since we started Phoenix New Times, it has been defined as the free, independent voice of Phoenix, and we'd like to keep it that way. With local media under siege, it's more important than ever for us to rally support behind funding our local journalism. You can help by participating in our "I Support" program, allowing us to keep offering readers access to our incisive coverage of local news, food and culture with no paywalls.
Make a one-time donation today for as little as $1.
Kristen Mosbrucker is a journalist who hails from the Northeast but has spent much of her career over the past decade across the South. She has interviewed everyone from business executives to homeless folks. She's covered business on the Texas-Mexico border in deep South Texas for the McAllen Monitor, technology and the defense industry in San Antonio for American City Business Journals, and the petrochemical industry in Louisiana for The Advocate newspaper. Early in her career, she spearheaded hyperlocal community news coverage for an NPR member station in Philadelphia.
Contact: Kristen Mosbrucker
Follow:
Twitter: @k_mosbrucker