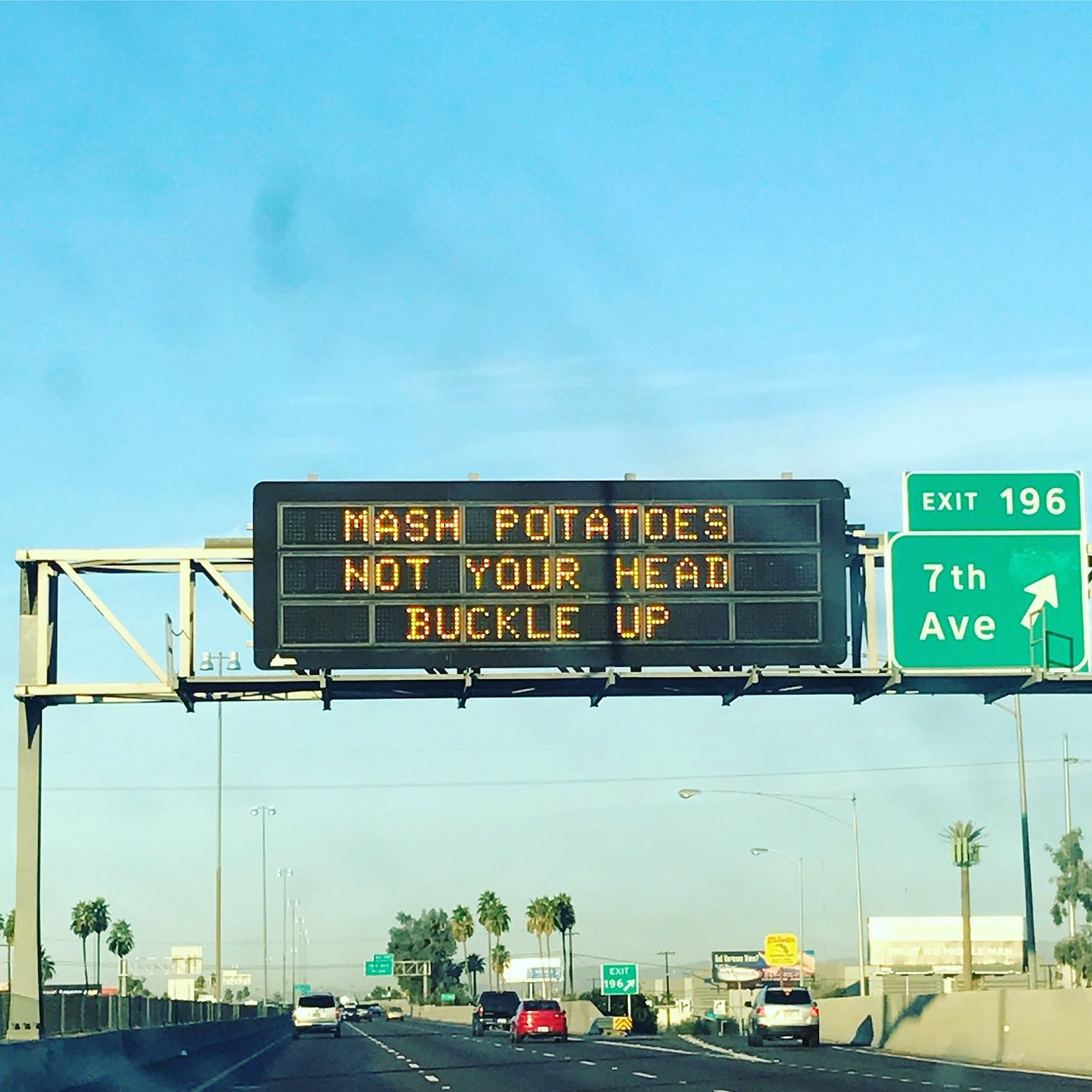 ADOT signs, like this Thanksgiving edition from November 2016, have always veered toward the dark or odd. The entries in the agency's new contest are no exception. Reddit
You've seen them. Anytime there's a concert, holiday, or major film release, the Arizona Department of Transportation lights up LED signs on the highway with a message about safety meant to inform and entertain. For example: A new Star Wars movie about to hit theaters? "TRUST THE FORCE // BUT ALWAYS BUCKLE UP."

Now, ADOT is allowing Arizonans to exercise the tremendous power to choose the next iterations of its road signs. From March 15 to 21, drivers can vote in a contest to choose two new editions of ADOT's trademark highway signs. Because ... people asked for this?

People evidently had some weird ideas about what to show to a captive audience of commuters. But here are a few of the strangest entries in ADOT's contest.

I'm not sure if this is true, and I hope ADOT is prepared to vouch for the scientific accuracy of their road signs.

Probably the best balance of utter weirdness and surprisingly clever, this one is a clear favorite to win in my opinion.

Although I like the use of the cliched motto found on Instagram pages and artsy woodcuts everywhere, this entry is slightly confusing. It also immediately inspires a sense of social dread, like something out of an anxiety nightmare. Why is everyone watching me drive? And if everyone is watching me drive, why aren't they watching the road?

I think this is supposed to mean that people will get angry at you if you're driving slowly in the left lane, but if anyone can explain this one to me, please email [email protected]

In a news release, ADOT said that they culled the 15 contest finalists from thousands of entries. Two winners will appear above state highways across Arizona. "Judging from the submissions, many Arizonans are fed up with speeders, impaired drivers, HOV lane cheaters and drivers that can’t be bothered to use turn signals," the release said.

We probably should've expected some odd entries since ADOT's signs tend to be extremely dark. Over Thanksgiving, the agency has posted highway signs that read, "MASH POTATOES // NOT YOUR HEAD," and "KEEP YOUR STUFFING ON THE INSIDE // BUCKLE UP."

In keeping with that theme, honorable mention goes to #14 on ADOT's list of contest entries: DRIVE DISTRACTED // BE SUBTRACTED.