Phoenix Cop: I Don’t Want a Pregnant Female on My Squad 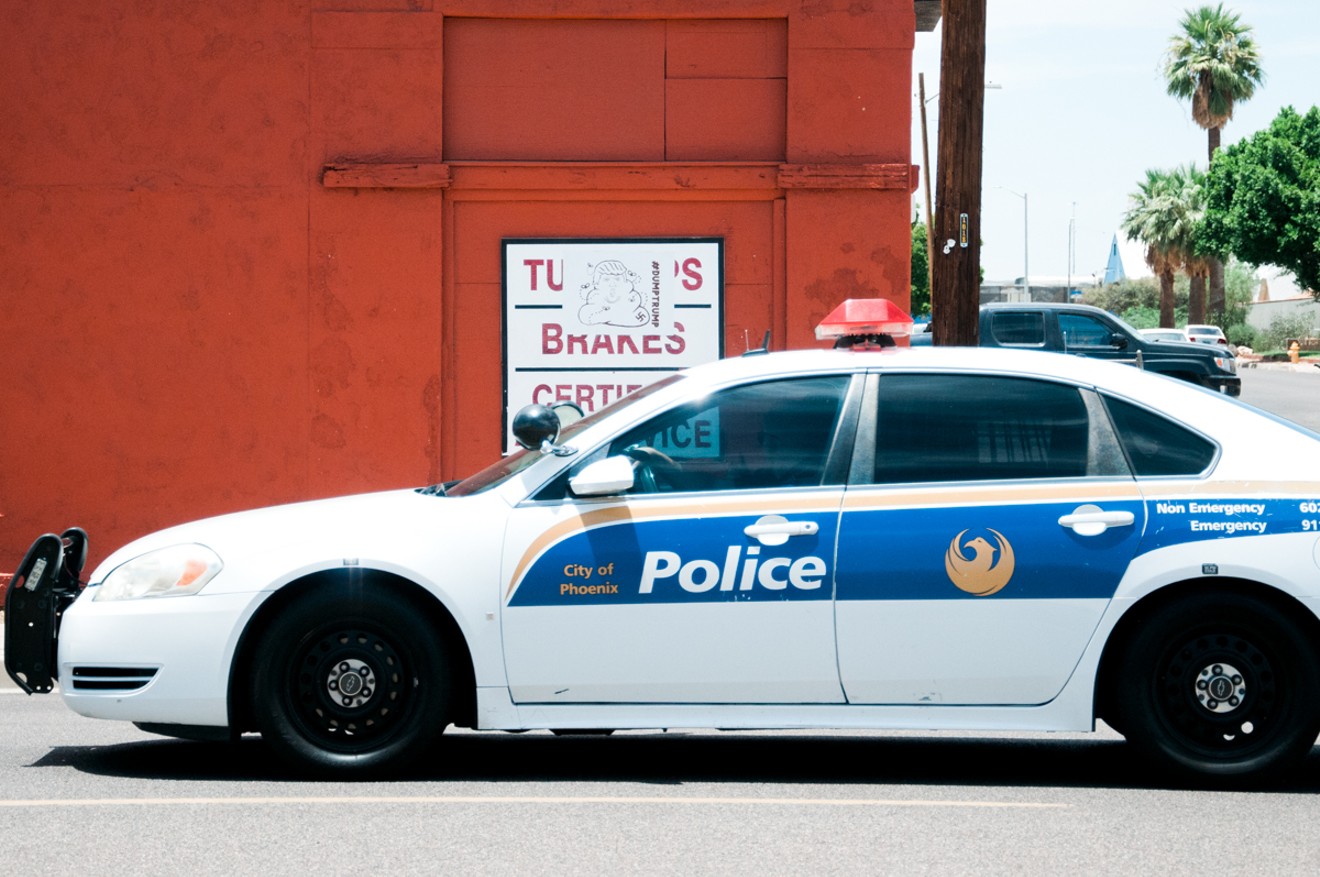 Ash Ponders
A Phoenix police officer's gender discrimination case against her department is moving forward, more than a year after her supervisors allegedly attempted to block her from transferring to another squad upon learning she was pregnant.

Angelique Briggs, a 32-year-old Phoenix police officer who filed the lawsuit in Arizona U.S. District Court last month, says the stress from her supervisors' actions caused her to have a miscarriage.

The city of Phoenix has filed a response generally denying Briggs' allegations, and Judge Michelle Burns has ordered a case management conference for September 30.

The Phoenix Police Department would not respond to Briggs' allegations, since the department typically does not comment on pending litigation. However, the city's answer to Briggs' complaint denied her claims, stating that her supervisors' actions followed department policy.

At the upcoming court hearing, Briggs' attorney, Stephen Montoya, and the city's attorney, Justin Pierce, must bring a case management report containing, among other things, a discussion of the evidence that will be used in the case (known as discovery), the total number of hours permitted for each deposition, and proposed deadlines for turning over discovery materials.

"I think there's a systemic problem with the Phoenix Police Department where people are afraid to complain. People are afraid to challenge individuals at the department for behaving in an overbearing, dictatorial manner," Montoya told Phoenix New Times. "I pray that something is done about it before another innocent person is needlessly hurt. It's basically a bully mentality."

The problems that ended with Briggs' miscarriage began on March 20, 2018, when Briggs put in a transfer request to move to a different squad with more favorable work hours. Briggs alleges that one of her superiors, Sergeant Christopher Sund, told her that her transfer request was the only one they received and that the transfer would be effective in two months.

One month later, Briggs and her husband found out she was pregnant. In May, she told some of her coworkers the news.

Not long after that, Briggs heard that the sergeant of the squad to which she was trying to transfer, Gary Bradley, had asked Sund how he could "go around" her transfer request because, he allegedly said, "I don't want a pregnant female on my squad."

According to the lawsuit, Bradley also asked his squad members to try to recruit more senior officers to his squad in an attempt to "thwart Officer Briggs' transfer request."

Then, on May 24, Sund told Briggs she wouldn't be transferring to Bradley's squad after all, since a more senior officer had requested to transfer to the squad "before she did" and therefore had precedence over her transfer request.

But according to Briggs, there were two vacancies on the squad at the time, and as of May 15, she was still the only officer who had requested to transfer to the squad.

Consolian has been accused in the past of ignoring or trivializing complaints from fellow officers. A post on the Phoenix Law Enforcement Association's website alleges that Consolian once barked at officers, "do you have a motherfucking problem?"

Briggs brought her transfer issues up to her union representative, who contacted Consolian and told him he "needed to make things 'right.'"

It didn't take long for Sund, Bradley, and Consolian to change their tune after that. On May 25, they told Briggs she would, in fact, still be transferring to Bradley's squad on May 28.

But Briggs claims the stress of the Phoenix Police Department's "attempts to sabotage her transfer" and discriminatory conduct caused her to suffer the miscarriage.

Ultimately, although Briggs still was transferred to the squad, she decided to file a complaint against Phoenix police with the city's Equal Opportunity Department. The department never took any corrective action against the officers involved, Briggs says.

"The City has tolerated a discriminatory work environment at the Police Department for years now, has routinely failed to investigate complaints of discriminatory harassment and retaliation in the workplace, and has failed to adequately discipline employees guilty of engaging in such misconduct," the lawsuit states.

Briggs is seeking compensatory and punitive damages, and is requesting an injunction to prevent the city of Phoenix "from committing similar unlawful acts in the future."

Montoya, a well-known local civil rights lawyer, has taken on the Phoenix Police Department before. In April, Montoya's client Sergeant Jeffrey Green won a $1.5 million lawsuit against the department. Green claimed that he had been retaliated against for helping a female officer report sexual harassment from another sergeant.

"What they did was wrong," Montoya said of Briggs' case. "They tried to get away with it. They never apologized for it, and they never took any corrective action whatsoever. She doesn't want anyone else to go through this. She wants it to stop with her."
KEEP PHOENIX NEW TIMES FREE... Since we started Phoenix New Times, it has been defined as the free, independent voice of Phoenix, and we'd like to keep it that way. With local media under siege, it's more important than ever for us to rally support behind funding our local journalism. You can help by participating in our "I Support" program, allowing us to keep offering readers access to our incisive coverage of local news, food and culture with no paywalls.
Make a one-time donation today for as little as $1.
Meg O'Connor was a staff writer for Phoenix New Times from April 2019 to April 2020.