Peek Inside the Phoenix Emergency Ops Center Before the Final Four 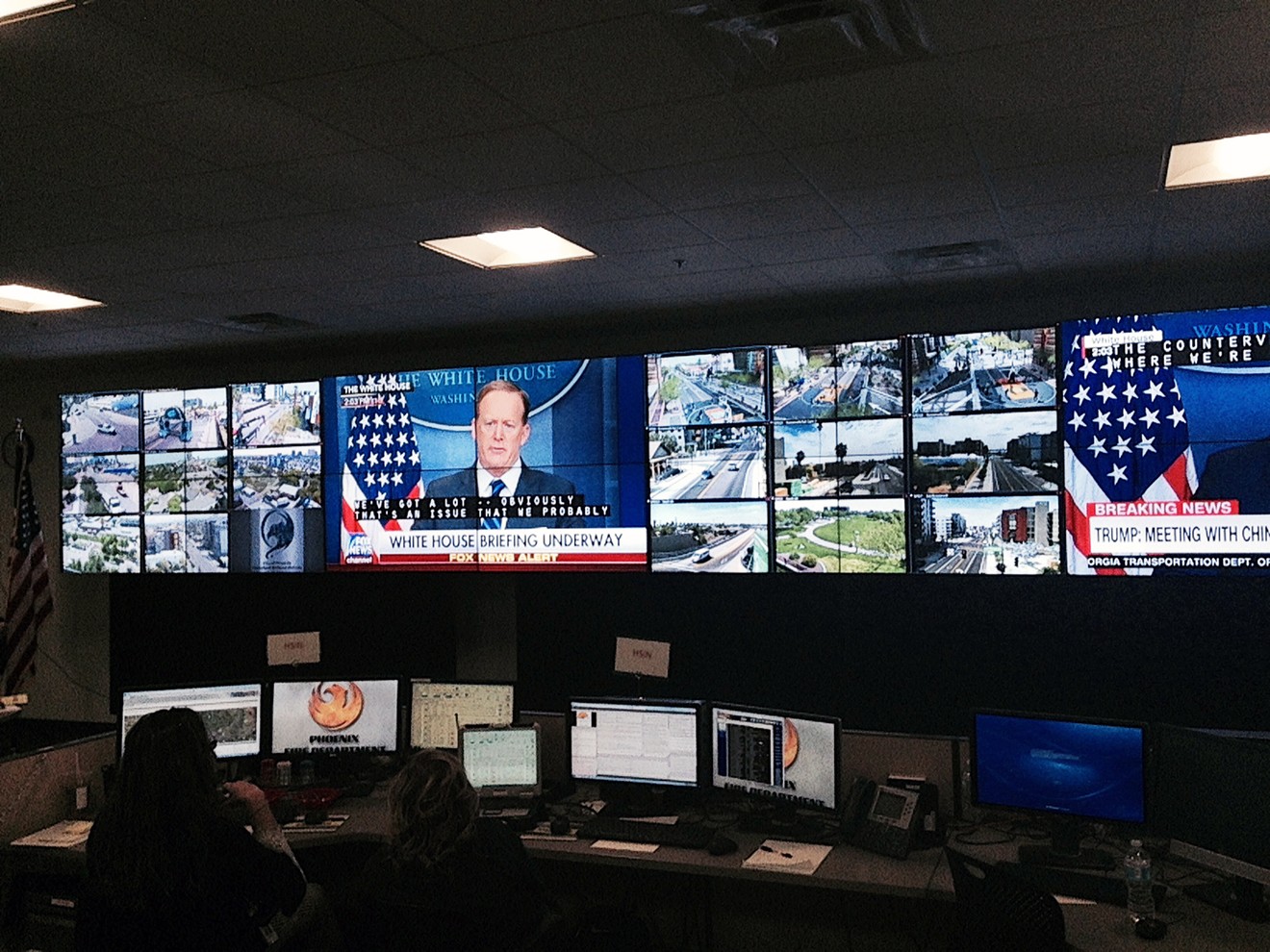 Five huge plasma TV screens dominate the MACC, or Multi-Agency Coordination Center, inside Phoenix's Emergency Operations Center. These screens will keep emergency crews up to the minute during NCAA Final Four weekend.
Sean Holstege
Phoenix Assistant Fire Chief Kevin Kalkbrenner will have a good day if the headlines Tuesday read that a broken water line near the beer tent at Margaret T. Hance Park was the worst crisis during this weekend’s extended NCAA Final Four festivities.

That’s because Sunday will be the busiest day his department has ever faced, officials said during a media show-and-tell at the city’s emergency operations center Friday.

Emergency planners expect 100,000 people to swarm downtown Phoenix on Sunday, lured by fan events for the basketball championships going on in Glendale, a 20,000-person free concert in Hance Park, a Phoenix Suns game, the Phoenix Pride Parade and Festival, and the Diamondbacks opener. Oh, and Beethoven's Ninth, too.

“It’s going to be a very big weekend in Phoenix,” Kalkbrenner said, as he showed of the ops center, called “The MACC,” or Multi-Agency Coordination Center, tucked away near the Salt River on Lower Buckeye Street.

Phoenix Assistant Fire Chief Kevin Kalkbrenner briefs reporters Friday on preparations inside the Emergency Operations Center for NCAA Final Four weekend.
Sean Holstege
He also knows, because he runs the city’s emergency-management effort, that Final Four is, like a Super Bowl or a BCS championship game, a chaos magnet. And we live in dangerous times.

Two men who the FBI said were inspired by ISIS and plotted to blow up the 2015 Super Bowl here got killed a shootout near Dallas in an unrelated attack. Their co-conspirator in both plots was sentenced to 30 years in federal prison in February.

“We have received no credible threats as of our last intel briefing,” Kalkbrenner said. The information was 45 minutes old.

Typically, the worst things the center faces are infrastructure hiccups, like those that threatened beer drinkers in the park Thursday. But during the last Super Bowl, emergency teams reacted to “four or five” more serious unplanned events, Kalkbrenner said.

One, he said, involved a pilot landing at Phoenix Sky Harbor International Airport who claimed to have a bomb, Kalkbrenner said. The Seattle Seahawks were flying in at the same time.

So authorities quietly kept the two apart and never told the team. The last thing a guy needs before the biggest game of his life is being told somebody’s trying to blow him up first.

Such unplanned events account for 15 percent of the center’s headaches. The rest of the activity centers on planned events.

Keeping everything safe and operating smoothly requires a monumental effort of staffing, planning, and resources.

On Friday, around 150 personnel gathered around computer terminals and communications gear.

A group of emergency personnel gather for an update inside the Phoenix Emergency Operations Center on Friday. They are some of the 150 people working here to keep NCAA Final Four weekend safe.
Sean Holstege

The MACC has access to about 5,000 cameras from around the region. Most are red-light enforcement cameras scattered around town and part of ADOT’s freeway monitoring system. That system includes a few that I’m not going to tell you about or why. Officials can augment the surveillance with about 40 mobile camera units.

Teams also have access to aircraft from the National Guard and CBP, and have a direct pipeline to NORAD if they have to scramble jets in an emergency. That’s what happened over U.S. skies right after the 9/11 attacks.

That call would originate from a nondescript room in the hall outside the hive. It’s marked by a simple cardboard sign and only people with top-level national security clearance can enter. It’s called the SCIF, the Sensitive Compartmented Information Facility.

The scene Friday looked a lot like the numerous planning drills, called tabletop exercises, which go into securing a big event.

Phoenix teams held tabletops in March. One tested strains on the infrastructure, another mimicked a catastrophic event. The FBI ran a later drill.

All of it is to ensure that on the big day, emergency teams can talk to each other and know what to do, when, and in what sequence.

“The best thing to know five minutes after an event is what happened five minutes before an event,” Kalkbrenner said.

That’s where the public often comes in. The ops center manages a tip line, which has been ringing more than 200 times a day this week. Such a call alerted crews to the water break Thursday.

The Phoenix Fire Department is at full staffing to ensure the routine chaos of the day doesn’t get overlooked. Plus, it is bringing 24 extra people in mobile bike-and-cart teams to rove the packed streets and parks with emergency medical kits, defibrillators, and trauma boxes.

“This is a first for us,” Phoenix Fire Department Capt. Rob McDade said, likening the city's first big park concert to Simon and Garfunkel in Central Park.

For downtown Phoenix revelers, their biggest headache may the one consuming emergency planners right now: getting around.

Metro will maintain its Sunday schedule of trains every 20 minutes, but just in case, a fleet of reserve buses has been mustered to bridge gaps in train coverage.

Hopefully parking, and a broken water line, are the worst terrors Phoenix will face. Kalkbrenner certainly hopes so.