Valenzuela owed $12,208 in debt and interest to the Arizona Federal Credit Union as recently as last year, court documents show. Until April, Valenzuela’s city salary was being garnished to pay back the money owed after the creditor secured a judgment against Valenzuela in Agua Fria Justice Court.

His campaign staff maintained that the debt was not a reflection of Valenzuela's financial management, pinning the unpaid bills on Valenzuela's former spouse. As evidence, his representatives presented New Times with a notarized letter signed by Valenzuela's ex-wife, Sonya.

In the letter, notarized May 7, 2018, Sonya Valenzuela takes "full responsibility" for a line of credit debt.

“The debt in question incurred during our marriage was my obligation,” she wrote. “I have assumed 100% responsibility for it and it has now been fully satisfied.”

On March 21, 2017, the Agua Fria Justice Court ruled in favor of the credit union against Valenzuela, compelling the city councilman to pay back the principal amount of $6,668, plus $3,776 in accrued interest and $656 in costs and attorney's fees.

Four months later, the court approved a continuing lien for 25 percent of Valenzuela's nonexempt city earnings. By that time, Valenzuela's debt had grown to $12,208.

Court records include a 2006 agreement to obtain the open-ended credit plan; the document bears Valenzuela's signature, but does not mention his spouse. 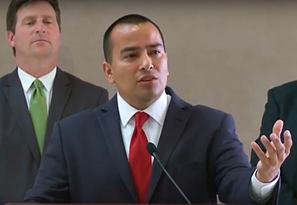 A spokesperson for Valenzuela's campaign, Barrett Marson, dismissed the issue of Valenzuela's unpaid debt and garnished salary, calling the matter a "nothing burger."

"Sonya acknowledged that it was her debt. She repaid the debt. She has taken responsibility for it," Marson told New Times.

When asked why it took over a year for Valenzuela to address the court judgment against him that resulted in his earnings being garnished, Marson said that court proceedings take time.

He claimed that the notarized letter, signed three months ago, was meant to prove to future creditors that the debt did not belong to Valenzuela.

"Daniel was unaware of this debt that remained from his marriage until his wages were garnished," Marson said in an emailed statement. "That triggered an investigation by him, his former wife, their legal counsel and the lending agency. That process took approximately one year."

Valenzuela's aides did not explain why the bad debt was not addressed during Valenzuela's 2015 divorce proceeding, what the borrowed money was used for, or why he received no notification of the debt before his wages were garnished.

Moreover, it's unclear why Valenzuela allowed his city pay to be garnished at all – let alone for much of last year – if the unpaid bills were his ex-wife's fault.

When asked for more details, Valenzuela's aides were silent. The campaign later sent a statement from Valenzuela, without making him available for an interview.

“When it was determined the debt was my former wife's, she assumed responsibility, paid off the loan, and reimbursed me," Valenzuela said in the statement. "The notarized letter addresses this matter.”

Under Arizona law, however, a couple is jointly responsible for paying back debt incurred while they're married, unless the debt is settled during a divorce.

Valenzuela and Sonya divorced in 2015, according to Maricopa County Superior Court records. Valenzuela remarried Wendy Villa, who previously served as his chief of staff at the City Council.

The court records also show that during spring 2013, Valenzuela stopped making minimum payments on the $6,668 balance. By the summer, Valenzuela was behind on his payments to the tune of $834.

His city salary was later garnished at a reduced rate of 15 percent in September 2017, according to court documents, after Valenzuela “agreed to voluntarily accept a reduced amount withheld."

Valenzuela faces another outgoing city council member, Kate Gallego, in the November special election to replace former Greg Stanton, who resigned in May to run for Congress. Gallego's campaign declined to comment on Valenzuela's financial situation.

Valenzuela and Gallego are both Democrats, although the city ballot is nonpartisan. A pair of city hall outsiders, Republican Moses Sanchez and libertarian Nicholas Sarwark, are also competing for the mayor's office.

Last October, Stanton announced that he planned to step down to run in Congressional District 9. Hours later, Valenzuela declared that he would run for mayor. Stanton resigned on May 29, and Valenzuela followed suit on July 18.

Valenzuela, 43, works as a firefighter in Glendale.

His spokesman denied that the notarized letter was signed in order to stave off questions during Valenzuela's mayoral race, in spite of the timing. The debt was resolved and the letter was signed by his ex-wife about two months before Valenzuela resigned from the Council for his run for mayor.

“I know Daniel’s opponents want to make this an issue, but it’s not," Marson said.
KEEP PHOENIX NEW TIMES FREE... Since we started Phoenix New Times, it has been defined as the free, independent voice of Phoenix, and we'd like to keep it that way. With local media under siege, it's more important than ever for us to rally support behind funding our local journalism. You can help by participating in our "I Support" program, allowing us to keep offering readers access to our incisive coverage of local news, food and culture with no paywalls.
Make a one-time donation today for as little as $1.