The new shelter at 28th Street and Washington includes 200 beds, and a number of other services. Katya Schwenk
On Friday morning, Thomas Knierim stood just outside of the city of Phoenix's brand-new, 200-bed shelter, smoking a cigarette. He had arrived the previous Saturday. Before that, he had been sleeping on the streets.

The heat was killing people who were left homeless in the city, Knierim told Phoenix New Times. "I was almost at that point," he said. He now has a roof over his head, and, six days in, has no complaints about his new quarters. "So far, so good," he said.

The city of Phoenix and Maricopa County, in conjunction with several social services organizations, opened the new shelter on May 13, just as temperatures began to spike. It's located at 28th and Washington streets, in the largely industrial and commercial corridor just north of Sky Harbor International Airport.

With scorching summer days around the corner, the shelter comes at an urgent moment for housing. Over the last few years, heat deaths have skyrocketed across the state. In Maricopa County, 323 people died due to heat in 2020; in 2021, that number climbed to 339. In comparison, from 2006 to 2019, the average heat deaths per year was just 106. These numbers include deaths both deemed by the county to be "caused" by heat and just "related."

A significant percentage of heat deaths in Maricopa County — 52 percent in 2021 — are homeless.

Maricopa County's first heat-related death this year was on April 26, according to data released this week by the county. Seven other deaths between April 24 and May 14 are currently under investigation as heat-related. So far, details about these deaths are unclear. But they won't be the last of the summer, not by a long shot.

Until last week, Knierim had been one of a thousand people living in "the zone," the downtown Phoenix encampment at 12th Avenue and Jefferson Street. Here, a single spigot serves as the only 24-hour source of potable water. Makeshift tents and shelters line the streets for blocks. 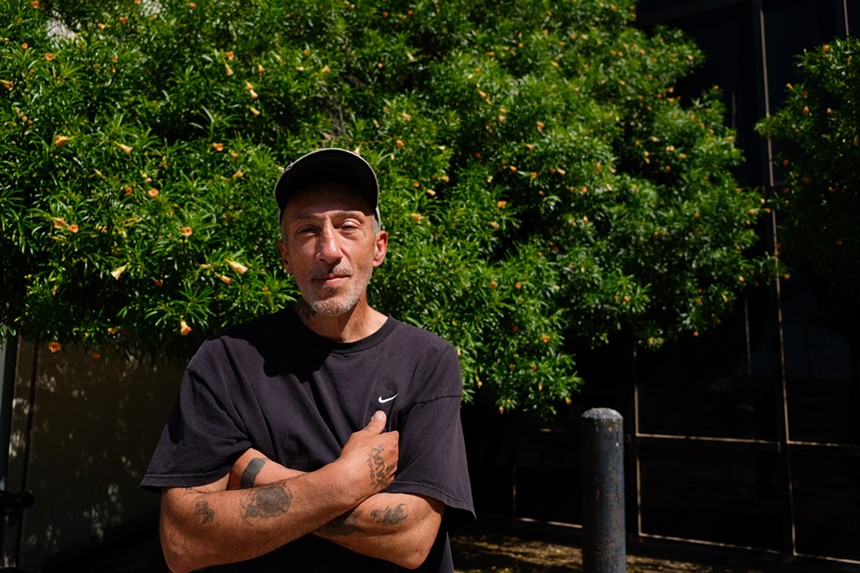 Thomas Knierim had been living on the streets in downtown Phoenix. Now, he's one of the first guests at a new, 200-bed shelter.
Katya Schwenk
Knierim has been homeless for years, he said. Before he moved to Arizona, he had been living in an encampment in Philadelphia, where he grew up. He wanted a fresh start, he said, and took a Greyhound bus this year to Phoenix.

In the last six months, the number of people living in the encampment has doubled. In December, 500 people lived in the zone, said Jessica Berg, chief program officer of the Society of St. Vincent de Paul in Phoenix, which is operating the new shelter. Now, they number an estimated 1,000.

"People are falling into homelessness, or it's taking them much longer to get out," Berg said. There was an urgent need for the city and social services to step in. "Especially now that the heat is here, we hope that this can be a model moving forward."

The encampment downtown has made some city residents leery of homeless shelters coming to their neighborhoods, for fear that sprawling encampments will soon follow. This has been an obstacle for those advocating for more shelter beds.

But perhaps because of its location — in a business district, relatively far from residential neighborhoods — the Washington Street shelter did not prove as controversial as other similar undertakings. One planned $4 million shelter in north Phoenix has drawn coordinated neighborhood opposition from hundreds, for instance. This shelter would be located across from a park, in a tight-knit neighborhood in the Sunnyslope area.

There are scattered businesses near the Washington Street shelter, but the street where it's located is quiet. Berg said the team was working on a "good neighbor agreement" with businesses and property owners in the area. Largely, she said, the relationships with neighbors have been positive, so far.

Berg noted, too, that the shelter was a "closed campus," unlike other shelters or resource centers, which might provide walk-up services. Guests at the shelter must be referred to stay there, and must sign in and out as they come and go.

The building is spacious and bright. Its front doors open into a wide cafeteria, where meals are served three times a day. Staff sit along the wall, answering questions. Knierim said the atmosphere was "quiet and laid-back." It was more welcoming, he said, compared to other shelters where he has stayed, places that kicked out their guests during the day, or were overcrowded and understaffed.

Three months ago, the city and county settled on the Washington Street property as the location for a new, high-capacity shelter in the city. The building was already owned by the city of Phoenix, and had been planned to be used by the aviation department. Between them, Phoenix and Maricopa County spent over $4.6 million to convert it into a shelter and get the project up and running over the last few months.

St. Vincent de Paul of Phoenix, which operates various social services projects across the Valley, is tasked with the day-to-day operations of the facility. Local nonprofit Community Bridges is also present at the shelter.

The shelter provides a long list of services: three meals a day, showers, laundry, clothing, beds. The facility, unlike some shelters, is open 24 hours a day, and has security onsite. It also provides connections to various resources, including job opportunities and mental health counseling. "It doesn't just provide a respite," said Jacqueline Edwards, the director of Maricopa County Human Services Department. "It provides a connection to other services."
click to enlarge 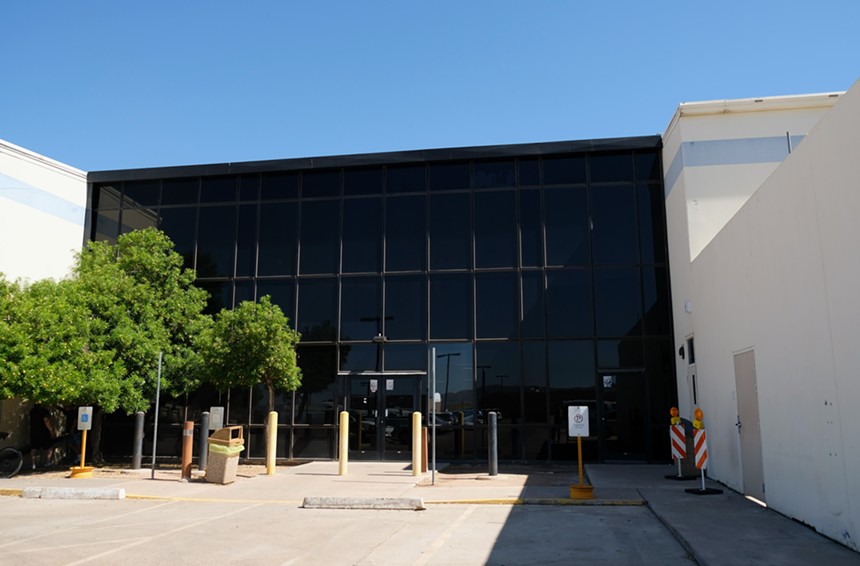 The new shelter located at 28th and Washington streets opened on May 13.
Katya Schwenk

So far, around 50 of the 200 beds are filled, Berg said. The shelter planned to bring in guests a few at a time — "so that we're not rushing through intakes," she explained. Staff were prioritizing bringing people in from the surrounding neighborhood, at 28th and Washington, as well as others like Knierim who were living in the encampment near the Human Services Campus.
Other than basic guidelines — "no drugs on the property, no violence, things like that," Berg said — there were few conditions for entry.

Stacey Champion, a local activist — and loud critic of the city's response to the homelessness crisis — said she was glad to see the shelter open. But, she noted, the new shelter simply did not provide enough beds to meet the demand. "We just need more of them," she said. "And faster."

Asked if the county was doing enough to address the issue, Edwards said, "Maricopa County is continuing to explore ways to expand shelter beds," noting that the county already operates a variety of transitional housing programs and bridge shelters aside from the Washington Street location.

There is, though, still more demand than there are beds available.

Another guest at the shelter, Marcellus Mais, told New Times that he'd had a good experience so far at the shelter. Mais, 34, said he's never really had permanent shelter. Originally from San Diego, he has bounced around the streets of Phoenix for years now, never staying in one place. "I was everywhere," he said.

For the first time in a long time, Mais said, he's been able to get a good night's rest. This was the biggest difference the shelter had made he said. "I wasn't able to get any sleep at all," he said — just a couple hours a night on the streets. Now, he sleeps through the night.
KEEP PHOENIX NEW TIMES FREE... Since we started Phoenix New Times, it has been defined as the free, independent voice of Phoenix, and we'd like to keep it that way. With local media under siege, it's more important than ever for us to rally support behind funding our local journalism. You can help by participating in our "I Support" program, allowing us to keep offering readers access to our incisive coverage of local news, food and culture with no paywalls.
Make a one-time donation today for as little as $1.