After a months-long investigation, Phoenix cops on Thursday arrested a man who they say is closely connected to an organized crime ring that has been terrorizing the city.

The suspect was busted with 1,200 catalytic converters, which curtail pollution from cars and trucks, piled high inside a self-storage unit near East Washington and 37th streets rented under his name.


Detectives named the suspect as 48-year-old Shelton Ford, a Phoenix man with a lengthy criminal record. Records show 31 indictments in Arizona and California including aggravated assault, possession of narcotics, fleeing the scene of a DUI, and possession of a firearm by a felon.


This time, he was nabbed on dozens of counts of possessing used catalytic converters by an unauthorized person. 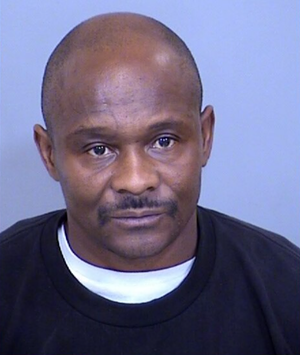 He could be fined as much as $4.8 million and face prison time, according to the Arizona Criminal Code.

Additional charges could come after a review by the Maricopa County Attorney’s Office.


“The vast majority of these parts are believed to be stolen,” Sergeant Vincent Cole said in a press release. “Many of them had fresh cuts, indicating they had been removed from vehicles.”


Detectives estimate the raw street value of the seized car parts to be around $200,000, or about $170 per device.

Converters that get "de-canned" can sell for $1,500 each. Criminals pluck out the ceramic honeycombs inside and send them to a smelter where the rare minerals are refined.

Experienced thieves, like whoever cached 1,200 catalytic converters in a storage shed just east of downtown before getting caught, can lop off the gizmos in less than two minutes. That’s some quick cash.


This bust comes shortly after Governor Doug Ducey signed a bill on May 9 in an effort to seal loopholes that have made catalytic converters easy to steal and sell, in what he called a “crime epidemic” in Arizona.


And enforce they did.


The investigation into Ford dates back to January, when cops were tipped off that he was squirreling away “a significant number” of the shiny devices that have been a hot-ticket item on the black market since 2020.

#PHXPD recovers more than 1,000 used and detached catalytic converters from a storage unit while serving a search warrant.
This concludes a months long investigation into a suspect accused of buying and selling them. pic.twitter.com/OwKUYbIBsF

The emissions devices are so valuable because they contain platinum, palladium, and rhodium, three of the most valuable precious metals. Rhodium alone is worth around $20,000 per ounce.


The cost for motorists to repair severed converters can be over $5,000.


Theft of the metallic devices surged by 6,500 percent last year in Phoenix, and the Maricopa County Attorney’s Office had only prosecuted 16 related cases before Ford’s arrest. 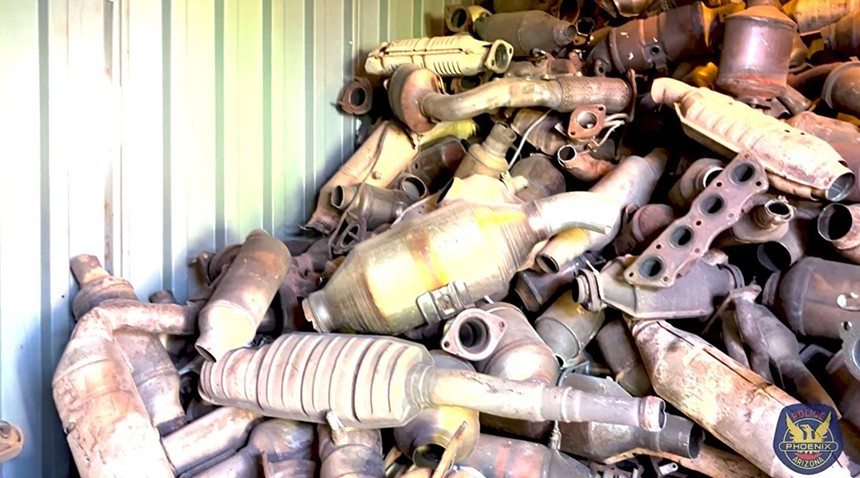 Since January, more than 1,600 converters were reported stolen inside city limits, Phoenix Police Sergeant Philip Krynsky told Phoenix New Times. That's one out of every 1,000 city residents victimized in just over four months, based on the city's 1.6 million population as of the 2020 census.

But one man could be responsible for as many as three-fourths of this year’s tailpipe piracy.


It was through “diligent police work” and “advanced investigative methods” that detectives were able to get a search warrant for the self-storage unit near Phoenix Sky Harbor International Airport, where they found the towering stockpile of catalytic converters, Cole said.


Ford was booked into the Maricopa County Jail system following his arrest. His first court date has yet to be scheduled. His attorney couldn't be reached for comment.


“We are asking the community to contact us whenever they have information leading to offenders that commit these types of crimes,” Krynsky said.


After all, this week’s epic bust came after a tip from a concerned community member.


Krynsky recommends Valley residents back their vehicles into parking spots in well-lit and open areas and near a camera whenever possible.


And when it comes to purloined pipage, he advised, “See something, say something.”