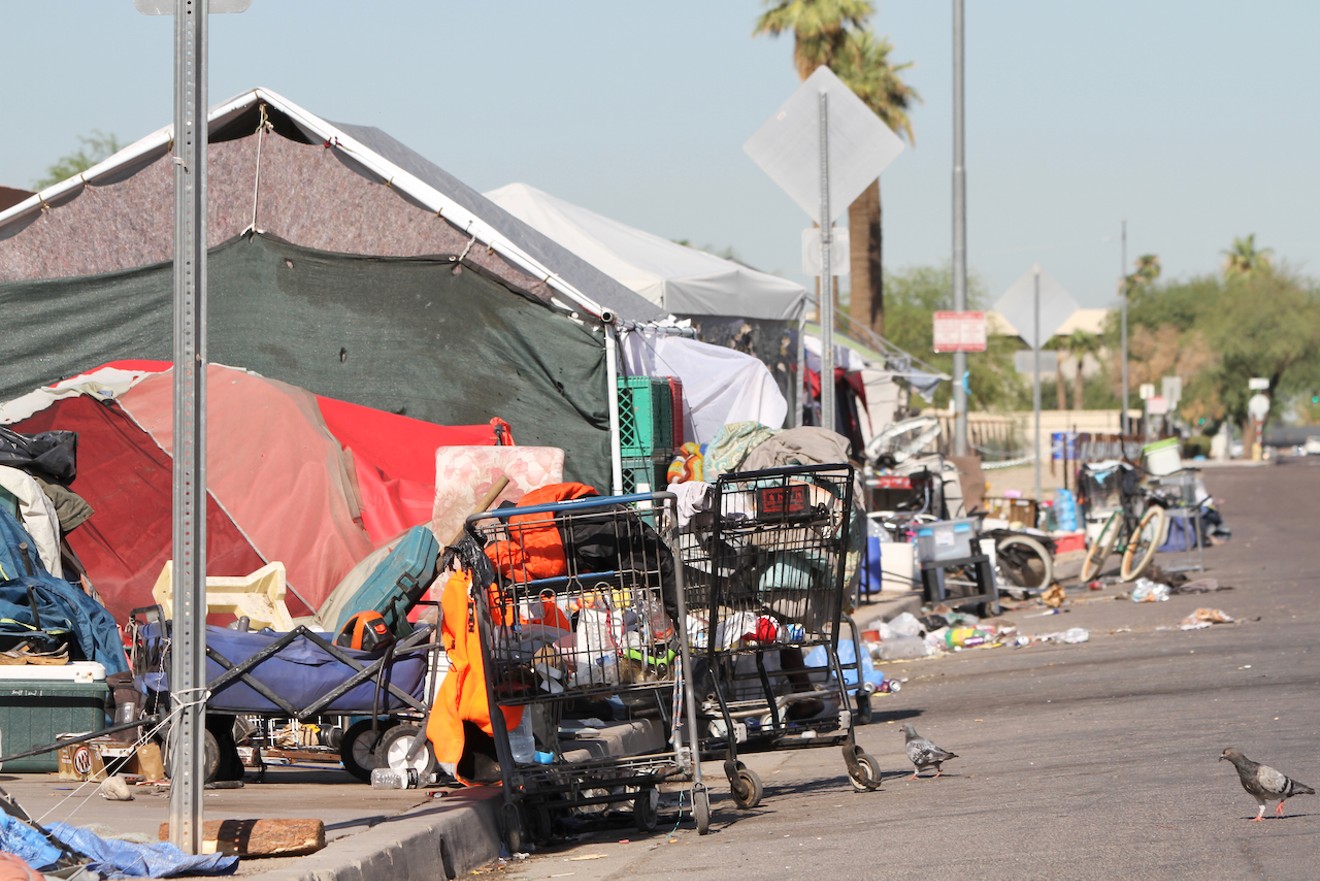 For unsheltered people living in the Zone, the cleanups conjure up memories of personal property — including medical paperwork and sleeping bags — being thrown away. The sweeps were paused earlier this year after scrutiny and resistance to them reached a breaking point.

The city has been drafting plans that it hopes will address previous concerns when it starts what it calls "enhanced" sweeps sometime next month. A formal start date has not been set and the city hasn't made details of its plans public.

But draft protocols for the sweeps were presented in an ongoing lawsuit over the Zone and obtained by Phoenix New Times. The cleanups will be a joint effort between the city and the Human Services Campus, which houses various service providers in the area.

The new protocols are similar to previous iterations of the cleanups. According to the city's draft plans, its streets team and police will shut down roads in sections. People in each area will be asked to move all of their belongings and human services providers will help them if they are not able to do so on their own. Unsheltered people will wait in a holding area while the city's cleaning team power washes and sweeps the area. Then, they will be allowed to resettle. In past cleanups, the process took hours.

Scott Hall, the director of the city’s Office of Homeless Solutions, confirmed in an interview with New Times that the plans, while not yet final, represent “a good summary of the intention” for the cleanups.

“We don’t have an exact date yet. We are making sure that the many moving parts are in place prior to getting going with the cleanups,” Hall said. “We’ve done several town halls with folks that are currently unsheltered in the area. We’ve had a lot of community meetings with the neighborhood.”

Amy Schwabenlender, the executive director of the Human Services Campus, declined to comment in an email to New Times. “Because these are draft documents shared in a court case and no final decision has been made, we will not be commenting,” she explained. 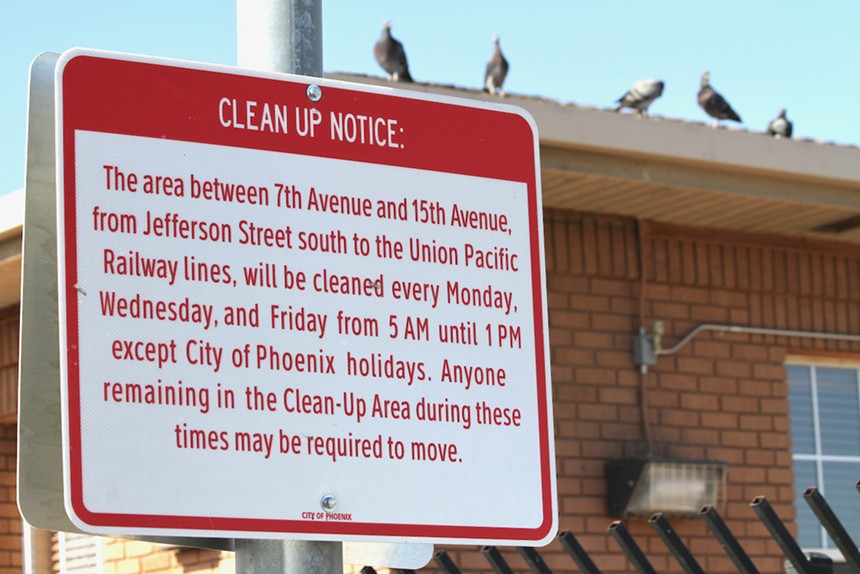 Signs in the Zone warn of cleanups before the sweeps were stopped in January.
Matt Hennie

The Zone, a downtown encampment just a few blocks from Arizona’s manicured statehouse lawn, has grown significantly over the last several years. People have lived on the streets in the area for decades, but only recently have they camped here semipermanently. Through several brutal summers, the Zone has remained.

The number of people living in the area has reached more than 1,000 by some estimates. Most sidewalks in the area are blocked by tents and other living structures. Limited bathroom facilities and dumpsters contribute to human excrement, trash, and drug paraphernalia on the streets, as neighbors explained in a recent court hearing.

Before January 2022, the city conducted large-scale cleanups in the Zone three times a week. In the early morning hours on Mondays, Wednesdays, and Fridays, police and city staff would arrive at the encampment. Unsheltered people living in the area were forced to move their belongings while the streets were cleaned. What wasn’t moved was often seized or thrown away, according to many people who have lived through the cleanups.

The practice was highly controversial, and it was one of the reasons the U.S. Department of Justice began its probe into the Phoenix Police Department. In its initial announcement, the DOJ said it would be investigating “whether PhxPD unlawfully seizes or disposes of the belongings of individuals experiencing homelessness.”

Several months after the DOJ probe was announced in August 2021, the city paused the mass cleanups in the Zone. It still conducts cleanings of the roadways but does not regularly require anyone to move their tents.

In late October, Hall said in court that the city stopped the cleanups after resistance from some residents, who refused to move their tents when police arrived. “We paused to make sure we were doing everything safely and appropriately,” he said.

Hall also claimed to New Times that the city wasn’t aware that property had been thrown away. “We haven’t had any reports of people’s stuff being taken and thrown away that I’m aware of, at least on the city end,” Hall said. “But we believe this new process will give ample time for people to identify their property.”

Elizabeth Venable, an organizer with the Fund for Empowerment, which works closely with people living in the Zone, called that claim “disrespectful.” She has spoken with dozens of people whose property was lost or destroyed during the cleanups when they weren't able to move their belongings or were away from the encampment, she said.

Cappy Maatsch, who lived full-time in the Zone for much of 2021, told New Times that in July, she went to the hospital due to issues with her hip. By the time she returned, the city had thrown away her belongings, she said.

Frank Urban, another organizer with the Fund for Empowerment, said unsheltered people in an encampment in Sunnyslope lost belongings in cleanups while he lived there and he's also talked with people in the Zone that experienced the same problem. “Just about anything and everything that would make life out on the streets bearable. We're talking clothing, sleeping bags, blankets, hygiene, medical paperwork, legal paperwork, medications. Anything and everything," he said.

When cleanups restart, unsheltered people in the Zone will be directed to the welcome center at Human Services Campus to reclaim their property.
Matt Hennie

The city's draft plans outline a new protocol for unsheltered people to reclaim their property to address concerns from past cleanups. A Human Services Campus outreach team will assist people with moving their property if they struggle to do so on their own before and after a cleanup. “We’ve heard that concern, and we’ve got the resources to be able to meet that need,” Hall said.

Any unclaimed property that remains after a cleanup will be tagged and “clearly wrapped with caution tape," according to the city's protocols. After seven days, the city will declare the belongings abandoned and remove them. The tags will direct the owner of the belongings to the welcome center of the Human Services Campus, which is located in the Zone, to claim the property. Abandoned property removed from the Zone will be "stored in a closed, locked, storage container for an additional 30 days,” according to the city. After that, the city will dispose of it.

Back when the cleanups were being conducted in 2021, there were no clear protocols, Maatsch said. “No seven days, no 30 days,” she said.

Venable applauded the property notifications but said she’s not convinced that the new protocol will solve all the issues surrounding the cleanups. “There are some things that we have questions about. And we want to hold them to their word, too,” she said.

Thirty days struck Venable as too short a period of time to store the belongings. In a 2011 court case regarding the seizure of property of unsheltered people by the city of Los Angeles, the Ninth U.S. Circuit Court of Appeals required the city to store seized property for at least 90 days. She hoped to see the city of Phoenix follow that precedent.

More than 1,000 unsheltered people live in the Zone, according to some estimates.
Matt Hennie

‘They're Living in Shantytowns’

Hall said that city staff have received a positive response as they notified people living in the Zone about the return of the cleanups. “Most people are agreeing that this is a good thing, and they want it themselves,” he said. Hall added that he did not expect to see the resistance to the cleanups that occurred last year.

Venable, who regularly distributes food and other items in the Zone, said many people she had spoken with there weren’t aware that cleanups were restarting. And she was doubtful that the reaction was universally positive. “There’s a complete lack of trust because it’s been violated so many times," she said.

Property and business owners in the area, however, have complained about the lack of extensive cleanups over the past nine months. Some 15 property owners in the neighborhood sued and said the trash and pollutants in the area amount to a public nuisance.

While it’s not clear how much the lawsuit factored into the decision to restart the cleanups again — Hall said he couldn’t comment on the litigation — the city did present the plans as part of its defense in a hearing in October.

But Venable said that even if the cleanups are well received, it’s simply a band-aid for a bigger problem. “The city doesn't have a long-term solution for these things, you know,” she said. “And people have to live. So they're living in shantytowns, and it creates harm.”

As the city starts the cleanups again, she added, “We’ll be out there watching them.”
KEEP PHOENIX NEW TIMES FREE... Since we started Phoenix New Times, it has been defined as the free, independent voice of Phoenix, and we'd like to keep it that way. With local media under siege, it's more important than ever for us to rally support behind funding our local journalism. You can help by participating in our "I Support" program, allowing us to keep offering readers access to our incisive coverage of local news, food and culture with no paywalls.
Make a one-time donation today for as little as $1.