Hundreds of Tips Led to Arrest of Suspected Maryvale Shooter; $75K Reward Will Be Paid

Aaron Juan Saucedo told police he changed his appearance, car, and behavior because of the campaign to generate tips in the capture of the so-called Maryvale Shooter, Phoenix officials declared Monday.

It was that campaign that Phoenix police now say broke the case of the city’s deadliest serial killer since the scary summer of 2006, when the Baseline Killer and Serial Shooters were on the loose.

At a press conference Monday, Phoenix Mayor Greg Stanton said 3,300 tips to the Silent Witness anonymous hotline led police to connect Saucedo to the string of slayings in 2016 they call the Serial Street Shooter case. 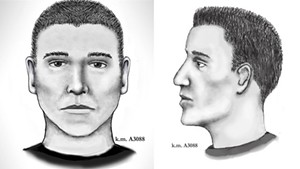 They have recommended 26 felony charges, including murder, attempted murder, drive-by-shooting, and aggravated assault.

Phoenix Police Chief Jeri Williams said no evidence connected Saucedo to any of the shootings between August 27 and September 10, 2015, which became collectively known as the Freeway Shooter case. Some Valley TV stations speculated last month that the cases might be linked.

Phoenix officials were eager to downplay speculation and to credit Saucedo’s arrest to detective work. "Our officers did not rest. They followed the evidence," Stanton said. "They had a clear mission ... bring the killer to justice and get it right."

“This is a good day in the city of Phoenix,” Stanton said.

Councilman Michael Nowakowski, who represents the Maryvale neighborhood where so much bloodshed occurred, said residents were “fearful and frustrated, but never gave up.” He said the public campaign to report crime paid off. “It works,” he said. 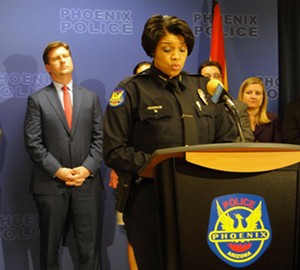 “This case plagued our community for a year,” she said. Victims included “mothers, sons, brothers, sisters, and families still mourning the loss of their loved ones.”

But they were not alone. Flanking city brass Monday were the state’s top federal agents at the FBI; Bureau of Alcohol, Tobacco, Firearms, and Explosives; and the U.S. Marshal’s Service, among others.

The FBI chipped in with behavioral analysis experts, while ATF was called for ballistics. Police weren’t talking about specific evidence, and declined questions about Saucedo’s possible motives, but the U.S. Marshal for Arizona, David Gonzales, summed up the case well.

“It’s been said that a serial killer is like a chameleon, and that’s what made this case so frustrating,” Gonzales said.

A stock photo of the suspect's vehicle, a late 1990s to early 2000s Black BMW 5 Series Sedan.
Silent Witness
Phoenix Police Department Sergeant Jonathon Howard said Saucedo told detectives he changed his appearance and cars after Silent Witness put out a sketch that resembled him and descriptions of black SUVs and sedans.

He added that police linked the Maryvale Shooter to three more cases as recently as last month. In only one, a new case, have they established any connection between the suspected shooter and his victims.

Although he struck as far east as 32nd Street, the most obvious connection between the killings is geography. At least six of the victims were shot and killed in the Maryvale area, a predominantly Latino section of west Phoenix with a reputation for high crime, drugs, and gang-related violence.

All the victims have been Latino or African-American, and most of the shootings took place in the hours just before or after midnight.

Four days later, he claimed his first victim, police said. That was Raul Romero, who was dating Saucedo’s mother. Just prior, Romero had been over at the woman’s house, where Saucedo also lived.

These other shootings occurred in 2016:

March 18: A 21-year-old man wounded while standing outside his vehicle at 4300 North 73rd Avenue

Police arrested Saucedo on April 19 this year and prosecutors charged him the Romero’s murder.

According to the booking sheet filed in Maricopa County Superior Court, Romero died from multiple gunshot wounds, and a witness saw a dark SUV driving away shortly after. No eyewitnesses reported seeing the gunfire.

Police recovered what they described as “several expended 9 mm shell casings along with two projectiles.” Weapons technicians concluded only a Hi-Point gun could produce the markings they found, the report went on to say.

After that, police said, investigators learned that Saucedo had sold a Hi-Point 9 mm handgun to a pawn shop 16 days later, on September 1, 2015. Detectives followed up with the pawn shop, whose employees reported that the same type of gun had been sold on June 28, 2016.

After recovering the gun from the new owner and testing it, police matched casings to those at the scene of Romero’s death. The suspect refused to speak to detectives, other than to say he didn’t do it, police said in court records.

Many questions remain unanswered. Many revolve around the weapons used and what evidence connects Saucedo to them and to the scenes of the crimes. The Hi-Point that detectives tested was in the hands of the pawn shop or a new, innocent owner during all of the incidents attributed to the Maryvale Shooter.

His office said it was too early to say if he will seek the death penalty, as his office did successfully in the 2006 Baseline Killer and Serial Shooters cases. Until prosecutors file a new indictment, it’s unclear what prison sentence Saucedo could be facing, if convicted. The murder of 12-year-old Maleah Ellis carries a minimum prison term of 35 years, according to the state’s sentencing guidelines.

Monday, Montgomery stressed the incompleteness, for now, of the outcome.

“Make no mistake, for the pain that both surviving victims and surviving family members of victims have suffered, this will bring them justice, but it will not bring the perfect justice,” Montgomery said.