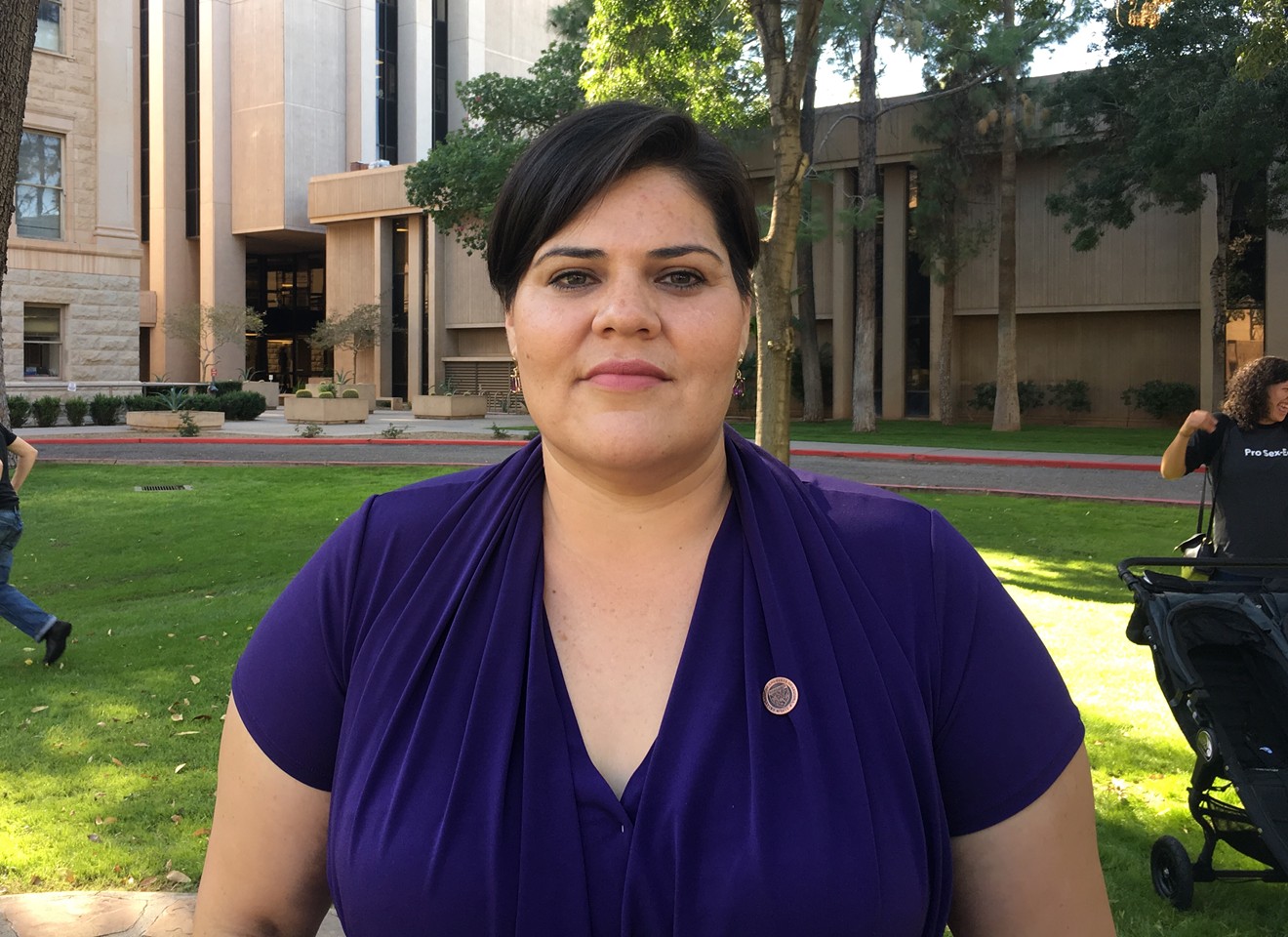 "I will not be intimidated by this harassment, and really this psychological warfare, designed to exclude people like me," Terán said. Elizabeth Whitman/Phoenix New Times
Update, 11:30 a.m., November 14: A Maricopa County judge has dismissed the suit against Arizona Representative-elect Raquel Terán filed by a birther claiming that Terán, who was born in Douglas, Arizona, is not a U.S. citizen.

"The judge correctly and squarely rejected Ms. Novoa's claims that are borne in her racial animus," attorney Andy Gaona told reporters after the hearing, referring to the plaintiff. The judge also ordered Novoa to pay Terán's attorney's fees, because she had brought the allegations without justification and for the purposes of harassment, Gaono said.

Two days later, Terán was served with papers to appear in Maricopa County Superior Court, with the date set for next Wednesday.

At a press conference Friday, Terán said she was deliberately being vocal about the lawsuit by activist Alice Novoa. The 40-year-old candidate-elect is a citizen who was born in Douglas.

"We know that we can just go to court and have this frivolous, baseless lawsuit thrown out, but it's better to speak out," she said. "I will not be intimidated by this harassment, and really this psychological warfare, designed to exclude people like me."

She added, "If I don't defend myself as aggressively as I can, then this ugly tactic will be used on somebody else."

Jim Barton, an attorney who is representing Terán, called the lawsuit "so procedurally deficient that ... a court may not even have an opportunity to move on the ... let's just call it what it is — racist underpinning of these attacks."

"We'll get this suit dismissed immediately," Barton said in remarks during the press conference. He said he and another attorney, Roopali Desai, on behalf of the Arizona Democratic Legislative Campaign Committee, would seek sanctions and fees.

“This is not an appropriate use of the legal system,” he said.

In a subsequent interview with Phoenix New Times, Barton said that the lawsuit had been filed as an election challenge, about three months too late. Under other circumstances, one would seek to dismiss the case, he said.

"In this case, it’s important that we really emphasize the problem that we have here, and the underlying insinuation that anybody that’s not white can be challenged like this," Barton said. "That’s a big deal, I think, and it’s worth the effort to seek the sanctions.”

This is not the first time that Novoa has challenged Terán's citizenship in the legal system. In 2012, when Terán ran for state Senate, Novoa alleged that Terán was an undocumented immigrant who was ineligible to run for office. A judge tossed out that lawsuit.

Novoa has a long history of questioning elected officials' citizenship. In 2006, she challenged the election of Alma Vildosola as a justice of the peace in Cochise County, claiming without evidence Vildosola did not fulfill citizenship and residency requirements.

At that point, the Mexican-born judge had been a U.S. citizen for more than a decade; her residency was proved in a matter of minutes, using property records.

Novoa, who went by Novoa-Benson at the time, had also run for justice of the peace, in the same precinct, the Douglas Dispatch reported in 2007. It also reported that in court in 2003, Novoa-Benson claimed that she was "a prophet of God" who was on a mission "take back the sovereignty of our nation."

"I don't know if I should speak to you," Novoa told New Times when reached by phone Friday, citing another New Times writer whom she called "very dirty." "I would tell you instead to be there Tuesday morning, and that's all I'll say ... and then you will know the truth."

Told that the hearing was actually on Wednesday, Novoa revised her initial cryptic statement, slightly.

"Be there on Wednesday morning, and you will know the truth. I'm from Douglas, Arizona, and that's all you need to know right now."

Raquel Terán, speaking at a press conference Friday.
Elizabeth Whitman/Phoenix New Times
Before running for office, Terán worked at a pro-immigrant organization, Promise Arizona. She has also been a vocal critic of former Maricopa County Sheriff Joe Arpaio, who was convicted of criminal contempt for disobeying a court order to stop racially profiling immigrants in arresting them.

In 2008, after criticizing Arpaio during a Maricopa County Board of Supervisors meeting, Terán was accused of disorderly conduct.

In an interview with New Times, she criticized the lawsuit as a burdensome waste of her and her constituents' time.

"I should be focusing on the issues that concern Legislative District 30 constituents," Terán said. "This is the last time she's going to do this," she vowed, referring to Novoa. "The courts already know I'm a U.S. citizen."
KEEP PHOENIX NEW TIMES FREE... Since we started Phoenix New Times, it has been defined as the free, independent voice of Phoenix, and we'd like to keep it that way. With local media under siege, it's more important than ever for us to rally support behind funding our local journalism. You can help by participating in our "I Support" program, allowing us to keep offering readers access to our incisive coverage of local news, food and culture with no paywalls.
Make a one-time donation today for as little as $1.
Elizabeth Whitman was a staff writer for Phoenix New Times from March 2019 to April 2020.