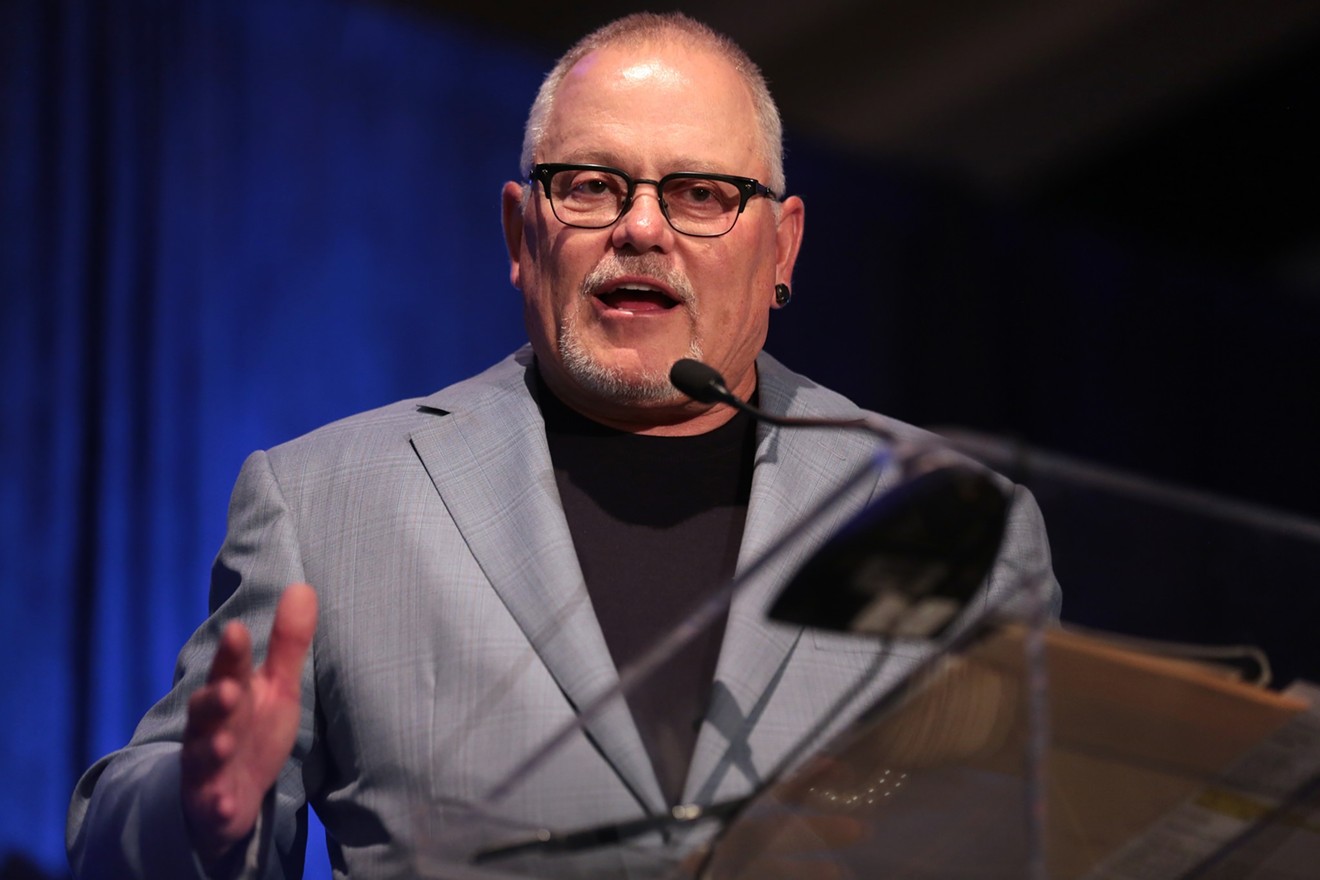 The latest drama in northeast Phoenix's Legislative District 28 would rate a mention this election season even if the candidate, Kathy Petsas, wasn't already embroiled in a public feud with Maria Syms, the incumbent Republican State Representative. But it gets weirder: After Phoenix New Times called Parsons and Jones to ask questions, both said they didn't intend for their money to attack the Republican candidate.

Parsons, a billionaire, was so sorry that he promised to make a large donation to Petsas' campaign.

Petsas, meanwhile, remains bitter about the mud-slinging despite the promise of $10,000 from Parsons and his wife.

"So they get to do all this damage to my campaign? I'm really skeptical," Petsas said on Tuesday. "I'm very curious that this is what it had to come down to, to know what his money was going to."

The negative campaign began two weeks ago with a radio ad, internet pop-up ads, and the project's pièce de résistance — a new domain name and web page that prop up Syms while slamming Petsas as a RINO (Republican In Name Only.)

"Do NOT Waste a Conservative Vote on Kathy Pappas Petsas," says the text on the site, BewareKathyPetsas.com. It urges voters to cast their ballot for Syms, the "only conservative" in the race.

The website is sponsored by the California-based American Strong political action committee. It further slaps Petsas for taking more than $40,000 in donations from the "liberal" Environmental Defense Fund. To top it off, she might be (gasp) pro-choice, and she "lobbied against ESA (Empowerment Scholarships Accounts)," the site states. 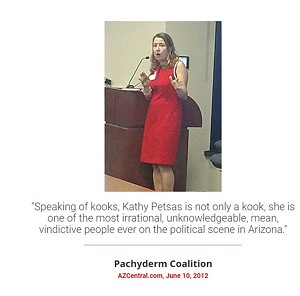 A screen-grab from the anti-Petsas website.
bewarekathypetsas.com
This game is not about playing nice, clearly. Syms is in a tough fight for two seats – hers, and one held by Democratic incumbent Kelli Butler – that are up for grabs on November 6. The three women, plus Democrat Aaron Lieberman, all hope to be one of two people left standing. Syms sees Petsas as a threat, likely figuring the swing district's voters may keep a Democrat, but oust her and bring on the more-moderate Petsas.

Her benefactors, as the website's disclaimer reveals, are Parsons and the Arizona Research Project, a company owned by Jones, GoDaddy's former general counsel and twice-unsuccessful Republican political candidate.

State campaign disclosure forms show that Parsons and Jones spent a total of $25,000 on the pro-Syms, anti-Petsas campaign, roughly equal to the $24,000 cost of the independent expenditure.

Parsons chipped in $15,000 to the PAC weeks earlier on September 4, just after the primary election that made Petsas' challenge to Syms official.

Of course, that's pocket change for Parsons: He gave $1 million to Jones when she ran as a Republican challenger for governor against Doug Ducey in 2014, and he gave $1 million to Trump's 2017 inaugural fund, out of $1.5 million in total donations by Arizonans.

But Parsons, who resigned from GoDaddy's board of directors earlier this month to focus on other business ventures, says he didn't know what he was getting into when he gave to American Strong.

"My donation to American Strong was not intended for use in the negative campaign against Kathy Pappas Petsas," Parsons told New Times through a spokesperson. "We have apologized to Ms. Petsas, and will be making a donation to her campaign."

Now the CFO of the Prostate Cancer Foundation in Santa Monica, California, Jones acknowledged that she approved the money sent to the PAC. She understood the PAC's campaign would be pro-Syms, not that it would be anti-Petsas, she said in a phone interview.

"If there are two [Republican] candidates, I would support both of them," she said, admitting it didn't exactly turn out that way. Jones said that either way, it's not a big concern for her. She said she's stayed out of politics this election cycle, and out of Arizona since taking her new job in August. 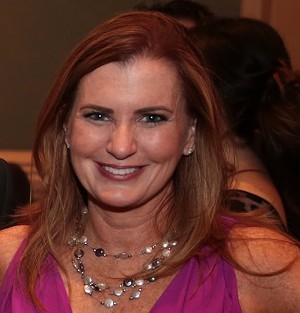 State Representative Maria Syms
Gage Skidmore
Repeated messages left with American Strong, which has the east Valley's 480 area code but is based in North Hollywood, California, were not returned.

The feud between Syms and Petsas began when Petsas entered the primary race over the summer, leading to a failed attempt to knock off an ally of Petsas, Kate Brophy McGee, the LD28 state senator.

As mentioned, Syms and Democrat Kelli Butler are running to keep their seats in the rare, split-party legislative district. Syms had hoped to "single shot" her race, allowing Butler and Lieberman to duke it out for Butler's seat while she sat back and cruised to victory.

Then came Petsas, a local politico with friends in high places, including Governor Doug Ducey, who endorses her.

Syms' husband, Mark, tried to run against the incumbent state senator in the district, Kate Brophy McGee, who supports Petsas. As Abe Kwok of the Arizona Republic covered for a June 20 article, that idea failed spectacularly when most of Mark Syms' petition signatures turned out to be fraudulent.

Syms could be in trouble in LD28 after angering teachers and liberals in April with an op-ed that claimed, among other things, that leaders of the popular Red for Ed movement were trying to start a "national socialist revolution."

With or without Syms' direct involvement, the American Strong PAC's proxy attack on Petsas adds to their feud.

After the Arizona Capitol Times' Yellow Sheet Report outed the PAC in August for its sloppy paperwork, the commission filed an official complaint.

The PAC's chairman, Brad Lyon, apologized to the commission in an August 28 letter, records show. The PAC made two mistakes, he admitted: The independent expenditure was "inadvertently" labeled as an operating expense on an Arizona Secretary of State campaign disclosure form, and the PAC had overlooked the requirement to make a separate filing with the Clean Elections Commission. The Commission forced American Strong to pay a $500 penalty.

The anti-Ugenti-Rita material had been funded by people with ties to Jeffries, the Yellow Sheet reported, including a Boulder, Colorado, accountant, Alicia Utley.

The PAC's latest campaign finance reports, which appear to have been filed correctly since the August penalty, don't indicate that Utley had anything to do with the anti-Petsas campaign. The PAC has blown through all of its money and has $725 in the bank, according to its October 22 report.

Petsas said she hadn't talked to Parsons when New Times told her about Parsons' apology and contribution offer on Tuesday. But a couple of hours later, Petsas reported that she and Parsons had talked, and that he apologized to her personally.

"He said he was led astray," she said, and that he believed American Strong would only produce pro-Syms ads with the money. He also said that he and his wife would each donate the statutory maximum of $5,000 to her campaign, she said.

"It's not right this happened," Petsas said.
KEEP PHOENIX NEW TIMES FREE... Since we started Phoenix New Times, it has been defined as the free, independent voice of Phoenix, and we'd like to keep it that way. With local media under siege, it's more important than ever for us to rally support behind funding our local journalism. You can help by participating in our "I Support" program, allowing us to keep offering readers access to our incisive coverage of local news, food and culture with no paywalls.
Make a one-time donation today for as little as $1.