Davison is a political newcomer and former running back for the Oakland Raiders, (now Las Vegas Raiders). His campaign is managed by Austin Steinbart, a.k.a. BabyQ, a QAnon influencer who claims to be from the future.


The team’s new ad quickly went viral on Twitter, amassing more than 1 million views in the first five hours, then doubling that amount in total views by the afternoon. Davison had fewer than 5,000 Twitter followers before the ad dropped, and the total increased to more than 8,700 over the next several hours.

The 51-year-old Republican is a Mississippi native who first came to the Valley to play football for Arizona State University. He fell in love with the area.

Since his NFL stint in the 1990s, Davison has worked as a pastor, author, and public speaker.


Davison calmly sips from a star-spangled coffee mug before donning a pair of sleek Ray-Ban sunglasses and producing a tricked-out AR-15 rifle.


“When this rifle is the only thing standing between your family and a dozen angry Democrats in Klan hoods, you just might need that semiautomatic and all 30 rounds,” Davison says in the ad.


A single Klan hood floats ominously in the swimming pool in the final frames of the video.


While Second Amendment enthusiasts dubbed it “the best political ad ever,” replies to the ad on Twitter were largely critical.


“This is a disturbing gun-fetish fantasy and I hope it never comes to be reality,” notable Ubisoft game developer Dan Amrich tweeted.


First, he’ll face four other lesser-known Republicans in the August 2 primary election. Polling data for the primary is not available.


Davison’s campaign believes he has a great chance to secure the GOP bid.


“We like to draw attention to the fact that the KKK was started by Democrats and is run by Democrats,” Steinbart, the campaign manager, told Phoenix New Times on Wednesday.


A 2020 fact check from USA Today revealed that the Democratic Party did not found the KKK, an apocryphal trope often regurgitated by the modern alt-right.

However, decades later, a Democrat splinter group that objected to the civil rights program of the Democratic Party led to a surge of KKK activity, including bombings of Black schools and churches and violence against Black and white activists in the south.

“When I grew up in the south, the KKK would be coming through, and everybody in our community would be scared and afraid, but I wasn’t afraid because my father had guns in the house and guns made me feel safe,” Davison told an alt-right blog on Wednesday morning. “The past is still relevant today because the Democrats are still terrorists.”


When he’s not claiming to be a time-traveling QAnon shaman, Steinbart has spent time in prison. In 2020, he was arrested on suspicion of using a synthetic, urine-filled penis to dodge drug tests. He was released last year after 225 days behind bars for leaking NFL players’ brain scans and medical records. 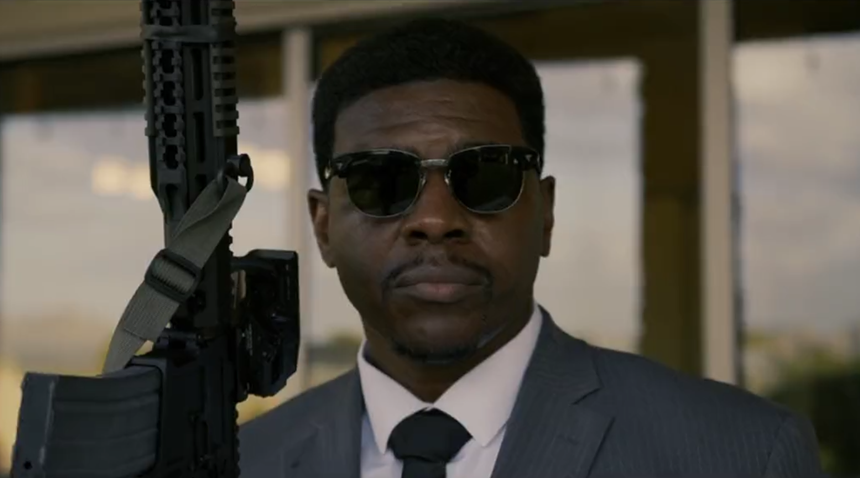 
Davison, who is Black, wants to “shake up traditional thinking in the Republican Party” by marrying conservative firearms ideals with a more progressive effort to curb institutional racism in Arizona, according to Steinbart.

This story has been updated to correct the type of gun described in the video.