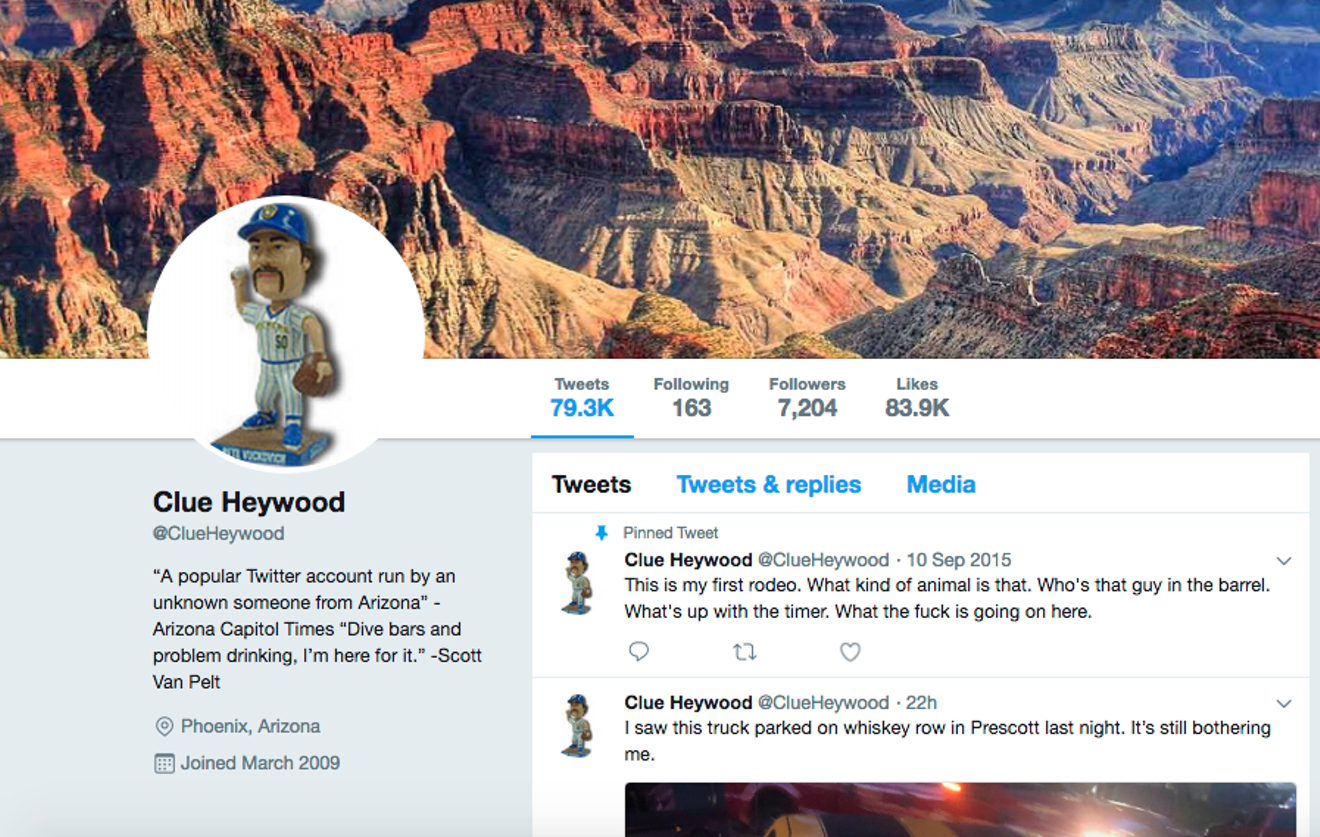 Clue Heywood, a popular Arizona Twitter personality, publicly accused a man who he believed was behind the Scottsdale string of shootings. Twitter
A popular anonymous Twitter personality falsely floated the name of a local attorney he believed to be responsible for a string of murders in Scottsdale, adding to a frenzy of rumors during the tense days before police identified the suspect.

By the time the authorities announced that an adult male suspect had shot himself early Monday morning in a Scottsdale hotel, Phoenix Twitter user @ClueHeywood had deleted his account.

On Monday afternoon, police reported that 56-year-old Dwight Lamon Jones was believed to be behind the six murders. Jones killed himself in an Extended Stay hotel room as a SWAT team closed in.

Heywood has said that he is a lawyer, and over the weekend — without any proof — he accused another attorney of carrying out the shootings. His tweets added to rampant speculation that police had zeroed in on a suspect in the killing spree. It's unclear if police received or handled tips about the falsely accused attorney as part of their investigation.

On Tuesday, Phoenix New Times reached Heywood by email; he would not disclose his real name.

"I greatly regret getting caught up in the hysteria and fear, and arrogantly repeating rumors I’d heard from several sources," he said. "I apologize to anyone I’ve hurt. I deactivated my account on Sunday and it will remain so indefinitely."

In a series of tweets that expressed frustration with the Scottsdale Police Department's handling of the investigation, Heywood said that a local attorney was behind the killings, accusing the attorney by name in at least one tweet. 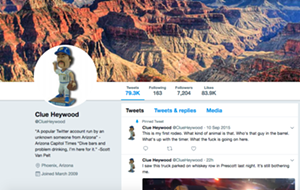 Clue Heywood, a popular Arizona Twitter personality, publicly accused a man who he believed was behind the Scottsdale string of shootings.
Twitter
New Times is not naming the man accused by Heywood.

"Shooter is an insurance defense attorney, can’t figure out his connection to the 4 victims yet but I guarantee there is one," Heywood wrote on Twitter around 3 p.m. on Saturday. "Would’ve been nice if Scottsdale PD told us his name 36 hours ago so we could decide whether we were in danger."
At one point, Heywood also tweeted a link to a divorce case in Maricopa County Superior Court's online records, implying the attorney had a motive for carrying out the shootings.

“Just linking this for no reason, none whatsoever, those names aren’t familiar or anything," Heywood wrote.

One of the attorneys in the divorce case is with the Scottsdale law firm Burt Feldman Grenier, where Jones shot Anderson and Sharp.

Heywood grew bolder in his claims, tweeting at 9:44 p.m. on Saturday: "Drinking on Whiskey Row in Prescott and ready to claim that $21k silent witness reward, it's fucking [name] you goddamn morons."

In a follow-up tweet, Heywood shared the attorney's image alongside the police sketch of the suspected murderer, and tagged the Scottsdale Police Department.

Indeed, the falsely accused attorney shares some similar features with the face sketched by police with the help of a witness. But as it turned out, the real suspect didn't resemble the sketch. 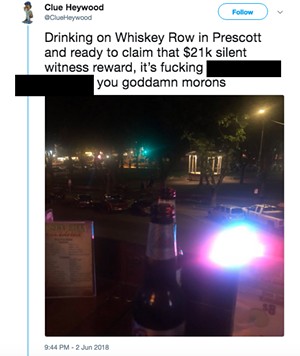 Twitter
A Google Trends search of the falsely accused man's name shows searches for the name spiking in Arizona around 10 p.m. on Saturday, shortly after Heywood sent his "morons" tweet. Related queries include "Scottsdale shooting" and "Steven Pitt."

Before that tweet, however, Heywood seemed reluctant to name a suspect. Responding to another Twitter user who asked if Heywood knew the shooter's name, he wrote, “Yes, but I can’t publish it. If @ScottsdalePD did their job everyone would know.”

He also wrote that he wasn't naming the man "[b]ecause of defamation laws." But he later changed his mind and took the risk.

With more than 7,000 followers, Heywood was one of Twitter's many anonymous comedians. A patron of local Arizona dive bars, his tweets were often profane but occasionally humorous.

Heywood's real identity is unknown. (For a profile photo, Heywood used a bobblehead of Milwaukee Brewers pitcher Pete Vuckovich.) He listed Phoenix as his location, and many of his tweets referenced working as an attorney. In 2016, he tweeted that he was a real estate lawyer.

Heywood didn't just tweet out the name to the rumor mill on Twitter: He also pitched his suspect and theory behind the murders to New Times via direct messages on Twitter.

At least one local television reporter heard a similar rumor — either because of Heywood or someone else — and thought it was worth spreading online.

FOX10 Phoenix reporter Stefania Okoliè tweeted around 1 p.m. on Saturday that her sources believe "an attorney in the Valley" to be behind the shootings.


Law enforcement sources confirming shooting death of Steven Pitt, 2 paralegals at a Scottsdale firm, & a Doctor at a Scottsdale therapist office are ALL connected. Sources also telling me who they believe is behind the shooting. He is also an attorney in the Valley #Fox10Phoenix

Her tweet was shared widely, racking up over 140 retweets — way more than Okoliè's other tweets on the shootings.

Over the weekend, people cheered Okoliè for her dutiful coverage of the shootings. But ironically, the popular tweet about the attorney — an explosive piece of news, had it been true — was based on an unfounded rumor. Requests for comment to the FOX10 Phoenix newsroom were not immediately returned.

When the news broke that a suspect was dead in the Shea Boulevard hotel, people logged on to hear Heywood's response. But his account had gone dark, with many wondering why.

"What happened to @ClueHeywood?" Lauren Joffe wrote. "AZ murder suspect might be dead at 69th & Shea, came to tell Clue and his [account] is gone."
KEEP PHOENIX NEW TIMES FREE... Since we started Phoenix New Times, it has been defined as the free, independent voice of Phoenix, and we'd like to keep it that way. With local media under siege, it's more important than ever for us to rally support behind funding our local journalism. You can help by participating in our "I Support" program, allowing us to keep offering readers access to our incisive coverage of local news, food and culture with no paywalls.
Make a one-time donation today for as little as $1.