In 2020, toilet paper flew off the shelves amid a scramble for supplies as lockdowns loomed imminently ahead. Wikipedia Commons

We all remember March 2020, and the moment the world stopped turning because of the COVID-19 pandemic. We all remember the uncertainty and the empty shelves. Nowhere was that more keenly felt than in the toilet paper aisle. We all remember that panicky sense that we wouldn't be able to wipe our own asses.


Well, it turns out if you felt that way, you weren't alone. And Arizonans acted on that impulse more than anyone else.

From California to Connecticut, people stockpiled as much toilet tissue as possible. But no state went as loco for loo rolls as Arizona, a study released this month revealed.


Cherry Digital, a public relations and content marketing agency based in Portland, Oregon, and London, conducted an analysis of Google search data for the phrase “toilet paper” through March 2020. The findings at the height of the panic buying period were compared to data that was compiled beginning in March 2019.


The paper chase in Arizona led to a whopping 11,115 percent increase in online searches for toilet paper compared to the previous year, according to Cherry Digital.


“Societies generally function because there is confidence and trust in the system,” Jamie Gibbs, content marketing director at Cherry Digital, said in a press release. “The pandemic marked an anxious time for many people, and therefore that very trust began to erode at an alarming speed, which explains why panic buying took place. Despite appearing to be an irrational thing to do, hoarding everyday items was actually a predictable human action.”


Among cities in Arizona, the biggest panic buyers resided in Phoenix.


That’s followed by Mesa, Gilbert, and Surprise. Nine of the top 10 Arizona cities for panic buying are in metro Phoenix, with the exception of Tucson at number five, according to data from Cherry Digital provided to Phoenix New Times. 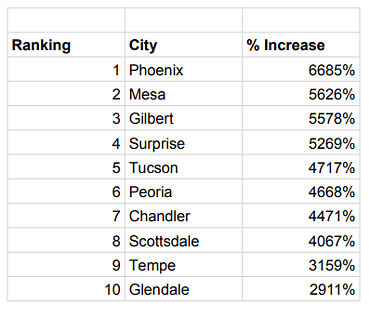 Nine of the top 10 cities for panic buying are in metro Phoenix, with the exception of Tucson at No. 5, according to data from Cherry Digital.
Cherry Digital

In a 1989 research paper from Rider University in New Jersey, "Understanding Consumer Panic: a Sociological Perspective," researchers noted, "In a crisis situation, there is a breakdown in the intellectual abilities of the individual in terms of processing information, assessing the environment, and analyzing alternatives."

In a San Francisco store, a fight even erupted in March 2020 between shoppers during the panic over toilet paper, resulting in bottles being smashed to the floor.


When choosing how much of a consumable to buy, people shop with their eyes, Phoenix-based economic analyst Jim Rounds said.

If an item looks scant on the shelves, people buy more of it — and the cycle continues.


But why Arizona? Demand for toilet paper in the Grand Canyon State increased by a factor nearly 10 times greater than in states like Alaska, the study shows.


According to Rounds, it all comes down to inflation, and Phoenix has the highest inflation of any city in the country, as New Times reported in April. In March 2020, inflation rates were already climbing faster in Phoenix than in other American cities, experts have said.


“It’s directly correlated to inflation,” Rounds said. “Arizona has its challenges with affordability. Inflation is higher here, so we saw a lot more panic buying.”


On top of inflation, supply chain disruptions led to panic buying in 2020, according to Rounds.


Experts initially waived off concerns about a shortage, but the rush for the bathroom basic exposed flaws in the supply chain in what Fortune Magazine called “the Great Toilet Paper Panic of 2020.”


“As soon as inventory slips, people freak out,” Rounds said. “A small disruption in supply can lead to months or years of panic buying.”


That’s what happened again with baby formula in May, when Arizona had the second-lowest supply in the country.


In June, professors at Arizona State University identified shortages in other commodities — tampons and fireworks — shedding light on how fragile everyday items people once took for granted have now become a retail game of Whac-A-Mole.


“Less supply is coming from China. In many cases, less than 50 percent of what was ordered,” said Hitendra Chaturvedi, a Tempe-based supply chain expert. “Consumers should be ready to see less variety, and whatever they will get will be more expensive.”


Another reason for the uptick in demand was that people actually needed more toilet paper, experts said.


The average American household uses 409 rolls of toilet paper per year, according to Georgia-Pacific, the company that makes the Angel Soft and Quilted Northern brands. The company estimated that people who spent all their time at home during the pandemic were using about 40 percent more toilet paper than usual.


In March 2020, some analysts already had predicted the problem, ranking Arizona as the state most concerned about a shortage of toilet paper.


But that’s not the only item panic buyers flocked to purchase in Arizona. Driven by the pandemic, gun sales hit a record in 2020 due to a “hoarding mentality” that was compared to stocking up on toilet paper and hand sanitizer.


By the end of November that year, 610,911 background checks had been performed in the state, nearly double the total number in all of 2019, according to FBI data.


Now that inflation has reached double digits in Phoenix, one of two American cities with inflation over 10 percent, experts predict a lull in panic buying.


“There are still supply disruptions, but I think there is going to be a lot less panic buying going forward,” Rounds said. “People are looking at the price tags more than they’re looking at how many units are on the shelves right now. Inflation is so out of control, and it’s hurting a lot of people.”