The cliffs that encompass the "Suicide" crag give Echo Canyon visitors a dramatic view from the parking lot. But they sometimes invite unprepared hikers for an ill-advised climb. Ray Stern
The 18-year-old man who fell 75 to 100 feet on Easter Sunday while climbing at Camelback Mountain suffered severe injuries, but authorities say he will make a "full recovery."

The teen, so far identified only by his first name, Jimmy, by a park ranger, slipped and fell on a notorious crag in Echo Canyon Park with the spooky name Suicide.

It was the same area where Makayla "Kayla" Castro fell about 60-100 feet on April 20 last year, dying from her injuries a week later.

Both incidents highlight the dangers of climbing at Camelback — or anywhere else — without the proper equipment and experience.

On Sunday, the young man and his 14-year-old sister were hiking on a trail west of the Echo Canyon parking lot when they decided to check out the Suicide cliff area. A steep, scrambly path leads to the base of the cliff, which is about a quarter-mile from the popular Echo Canyon Trail that leads to Camelback's summit.

The 18-year-old began climbing, wearing "lightweight Vans shoes" and taking no other equipment, according to Channel 12 News (KPNX-TV), which quoted a Camelback park ranger for its Tuesday broadcast.

Several hikers watched in horror as the man fell, and heard his screams. He landed in the thicket of mesquite and bushes at the base of the cliff. Firefighters used the "long-line" rescue method, flying him out in a stretcher at the end of a very long rope.

Doctors reported on Tuesday that Jimmy "was expected to make a full recovery," Captain Reda Bigler told the Phoenix New Times on Wednesday. "He suffered a traumatic brain injury, hip fracture, hand fracture, three rib fractures, and a [punctured lung]. They were surprised he had no long bone fractures. He is still in the hospital and was undergoing surgery on his hip and hand yesterday." 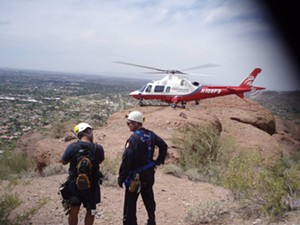 The Phoenix Fire Department responds to dozens of calls for help at Camelback Mountain every year.
Phoenix Fire Department
Three spectacular, rarely ascended rock-climbing routes on the rock face have been enjoyed by climbers for decades — the moderate Suicide, the slightly tougher Suicide Direct (first ascended in 1948), and the newer, more difficult Black Direct.

The reason for the route's names isn't clear, but the site has seen several bad falls over the years. In 1987, for instance, Arizona State University student Andre Dauvergne, 18, took a fatal fall while climbing unroped high on Suicide Direct, leaving his 19-year-old friend stranded until he could be rescued.

Climbing shoes, safety ropes, harnesses, and protective gear are used by experienced climbers on these routes.

Ironically, even as the first section of Suicide Direct entices impulsive hikers to give it a shot, most climbers at the park stay away from the "Suicides" and focus on the area's better-protected sport routes. The intense height exposure and reputation for rotten rock are two reasons. The names of the routes could be another reason.

Attempting these lines without any rock-climbing experience, or even with experience but no equipment, is a terrible idea.

Yet Camelback Mountain is well-known for bad falls. A prominent sign along Echo Canyon Trail tells the story of Clint McHale, the 25-year-old man who died in 2011 after falling about 50 feet in another part of the park.

The "head" of the camel shape from which the mountain gets its name is home to dramatic, pinkish, sandstone crags that have enabled a rock-climbing tradition in the park since the 1940s. But the cliffs, which give park visitors a dramatic view from the parking lot, also invite the unwary.

"These were just teenage kids," said Dave Baumgartner, a Phoenix Fire Department technical-rescue team firefighter who responded to both Jimmy and Castro's falls.

"The approach [to the crag] is tantalizing because it kind of slopes up gradually. The terrain at Camelback — it looks really doable. Then you realize you're 50-60 feet up."

"He was alert and able to explain his pain," he said, adding that the patient was in a substantial amount of pain. "He definitely had some trauma."

Jimmy didn't appear to have dropped 75 vertical feet, Baumgartner said. Rather, the teen likely "cheese-grated himself down the mountain."

Even climbers with equipment and training can have problems, he pointed out.

Last year, an 18-year-old woman suffered "significant injuries" in a rappel accident on the Praying Monk rock formation. Baumgartner said she was anchored in properly, but for some reason let go of the braking device as she descended on the rope.