Torres, in an Instagram post... via Instagram
A federal grand jury made life a little worse for self-proclaimed Three Percenter Israel Torres, formally indicting the 34-year-old Phoenix man on two counts of being a felon in possession of a firearm.

The first count covers the mirror-finished Colt .45 pistol that Torres allegedly flashes and fires in videos and photos posted to the Instagram account bqgbrotherhood1776. An FBI agent cites these posts in a warrant for Torres' arrest, filed with U.S. District Court in Arizona on February 16, one day before Torres was taken into custody by federal law enforcement.

The second count against Torres, handed down Tuesday, covers several additional weapons, including a Smith and Wesson .357 revolver, a Mossberg .12 gauge shotgun, an Omni .22 long rifle, and an AK-47-style WASR-10, among others.

Both counts cite Torres' two previous felony convictions for aggravated DUI, which according to the feds, make Torres a prohibited possessor under federal law. Each count carries a possible fine of up to $250,000 and/or 10 years in prison.

If convicted, Torres would face the likely forfeiture of his guns and ammunition. He was released from federal custody on his own recognizance after a hearing this morning.  (See update below). 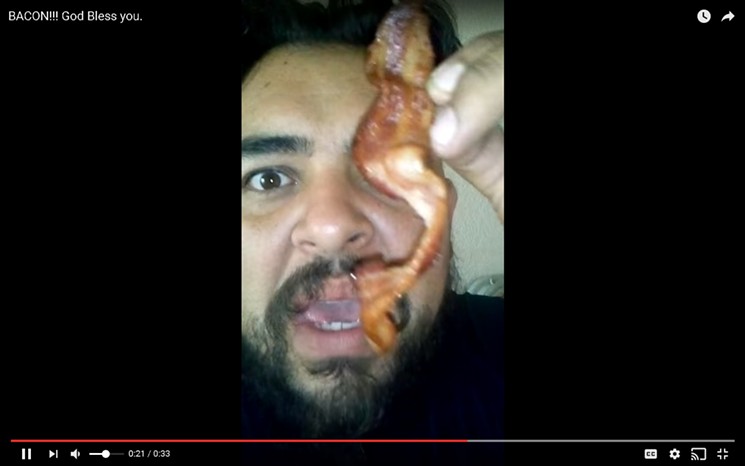 In numerous social media posts, Torres identifies himself as a Three Percenter, an anti-government, pro-Second Amendment movement similar to the far-right Oath Keepers in ideology.

And in various videos on the YouTube account #BQG Family, Torres expresses the belief that an uprising against the government by Threepers, as they are also called, is imminent. He advises people to move away from using paper money and toward adopting the barter system.

Torres has been a tireless promoter for a pro-gun rights group called "Barter Quality Goods," or BQG for short. An inactive, public BQG group still exists on Facebook. However, the active, private BQG Facebook page has been taken down since Phoenix New Times first broke the news of Torres' arrest.

The description on the private BQG Facebook page stated that group members once traded weapons with each other until Facebook forbade the practice. It's worth noting that, at least in theory, a prohibited possessor cannot purchase a gun from a licensed dealer because of the required background check.

However, a prohibited possessor could purchase a gun in Arizona through a gun show or directly from a gun owner.

Torres, with notorious local bigot Jon Ritzheimer in the white shirt.
via Instagram

Before BQG's private FB page was taken down, there was much discussion on it as to whether Torres' arrest was a mistake. But the minute entries for his two aggravated DUI's tell a different story. The first DUI was for drinking and driving "with his young child in the vehicle."

Torres pleaded guilty in 2004 to  a Class 6 "undesignated" DUI count, and was placed on probation for 18 months, according to court documents. In 2010, he petitioned the court to have the charge designated a misdemeanor, which is possible when the original charge is listed by the court as undesignated.

But the judge's minute entry in that case observed that Torres recently had acquired another aggravated DUI, a Class 4 felony, for a DUI while driving on a suspended license.

The minute entry also noted a poor probation record, with Torres missing drug tests, being tested positive for THC, and not paying all of his required restitution on time.

Torres' mugshot from his short prison stint.
via Arizona Department of Corrections


As a result the "undesignated" count was designated a felony.

In August 2010, court records show that Torres pleaded guilty to the second aggravated DUI, a Class 4 felony. He was sentenced to 8 months in prison, with credit for 30 days time-served in  jail, and three years probation upon release.

Torres and other BQG members attended Donald Trump rallies in Phoenix during the 2016 campaign, ostensibly to keep the peace, and in 2015, they showed up at anti-Islam demonstrations organized by notorious local bigot Jon Ritzheimer.

In more than one social media post Torres expresses his disapproval of Islam. In one YouTube video to the #BQG Family account, he pets a goat, telling the animal that it doesn't have to worry "about Mohammad trying to get you."

In another video to the same account, he declares himself to be an "Infidel," and tells his audience to, "Say no to Muslims."

He eats a piece of bacon in the video, stating that, "Allah is not real."

Assistant U.S. Attorney Lisa Jennis argued that Torres had talked openly about overthrowing the government through his various social media posts. Jennis argued that he was a danger to the community and should not be released pending trial, pointing to his spotty probation record on his previous aggravated DUI convictions.

She referred to his group “Barter Quality Goods,” or BQG for short, as a “militia,” and referenced one blog post with a mushroom cloud that seemed to suggest this was a way for America to make peace with Islam.

Torres’ public defender Zachary Cain countered that the DUI convictions were in Torres’ past, that he was now clean and sober, and that he was gainfully employed and supported by family members, several of whom were in court to observe the proceedings. Cain also mentioned that his client was a deacon of a local church, where his father is the pastor. And he said that Torres’ group BQG had done good works in the community, such as handing out food to the homeless.

Duncan asked Torres directly if he would abide by the conditions of the court.

“Absolutely, your honor,” Torres answered. “I’m an honest man. I believe in love, God...and respect. And I have all respect for authority. I’ve never ever had anything other than that. At the end of the day, a man only has his word. I give you my word that I will be here every time and do everything that you ask me to do.”

Based on this, Duncan ordered Torres released on his own recognizance, with several conditions. No weapons are allowed in his workplace or his home, even those owned by others. He’s not allowed to possess or have access to guns. And he must remove any postings to social media that invite others to bring guns to him.

Torres also agreed to remove several legal, exploding targets from his home that were not confiscated by the FBI upon his arrest.

Outside the court, Torres’ family seemed elated by the judge’s decision, with several telling New Times that this was all part of God’s plan and would make Torres a better person in the end.