Trump Protester Has a Message for Phoenix Police: Nuts to You

A protester is hit in the groin with an object fired by police. Phoenix Police Department

Police have arrested the protester who kicked canister at ofcrs, then got hit with a non-lethal round in the crotch #azfamily #pepperballs pic.twitter.com/8hrRJw5dwh


When cameras captured Joshua Cobin kicking and throwing tear gas canisters at a phalanx of Phoenix police, authorities ridiculed him, vilified him, and then threw the book at him.

Now the 29-year-old GoDaddy sales rep from Mesa wants to clear his name, set the record straight, and help people accused of low-level offenses who don't have the means to get out of jail or get adequate legal help.

A few hours in jail can do that to a person.

“The police here are untouchable. I’m trying to change that,” Cobin  told Phoenix New Times in an interview. “It’s not okay for people to think the police ... can do no wrong.”

Cobin’s 15 minutes came on August 22. President Donald J. Trump had just left the Phoenix Convention Center, some plastic water bottles and other sundry projectiles had left the hands of people protesting his appearance, and rubber bullets, tear gas, pepper spray, and assorted less-than-lethal rounds had left the firearms of police.

About a half hour later, Cobin found himself on Second Street. A police helicopter had clearly ordered the thin crowd to disperse or face arrest for unlawful assembly. He heard that.

He, like many protesters and observers, is adamant he never heard amplified warnings on Monroe Street an hour before the clash. That’s what several police described in their official reports on the protest. 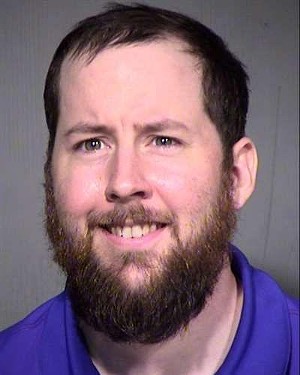 Joshua Cobin is motivated by his Trump rally experience.
Maricopa County Sheriff's Office
Those reports reconfirm what Police Chief Jeri Williams told the public that night. Police responded in a graduated, measured way to assaults on them, averting serious injury, damage, and arrests. Much of the community praised the response as appropriate.

At the time, Cobin was angry, confused, bewildered, disoriented, protective – a cauldron of conflicting emotions. He was helping an elderly person get up when he felt a round of something strike him near the groin.

A new emotion flashed through his mind.

“If the police unlawfully attack me with pepper spray, I have the right to unlawfully defend myself,” Cobin recently told Phoenix New Times.

He said something similar to police after they arrested him, documents filed in Maricopa County Superior Court confirm. And that, in the eyes of law-and-order types, made him dangerous and subversive.

At the station, police asked him one question before he lawyered up, Cobin said. They wanted to know if he went downtown planning to start a riot.

County prosecutors charged him with two felony counts of aggravated assault and a minor charge of unlawful assembly. He was looking at serious time.

“Police sad I was getting progressively more violent. I’m in a lot of pain. My whole body is on fire, and I can’t see anything. My mask has yellow gunk all over it,” he said.

Separately, Phoenix police released video footage to the media in response to their demands for the public records.

One video showed the tear gas can explode in Cobin’s nether regions. Off camera, you can hear somebody, presumably police officers reviewing the footage, chuckling, saying, “It WAS in the nuts.”

Other footage shows Cobin kicking one can and throwing another. He had severe burns on his hands, because the canisters can hot, 800 degrees Farenheit hot. The video also shows him charging a line of officers and getting struck again, at close range, by a can of white powder.

Police released a separate video, of a man in bandages in hospital, producing a selfie, calling himself Camacho, and expressing solidarity for his brothers and sisters in Antifa. Police had gathered it off the internet as evidence.

Since then, activists have come forward to say the whole thing was a hoax.

But that didn’t stop police spreading the idea that Cobin is Camacho and that the trouble that night began when Antifa provocateurs started throwing river rocks, a can of tear gas, and a makeshift spear at the line of police on Monroe Street. Police never dispelled the notion that Cobin was part of an unruly Antifa mob.

Cobin admitted in interviews with police and New Times, and in court, that he broke the law.

He pleaded guilty to the misdemeanor charge, in return for the two assaults being dropped.

“After the chopper (announcement), I committed a crime and pled guilty to it,” he said.

But he insists he has nothing to do with Antifa and has never been anti-cop. In fact, he was getting ready to leave when the trouble kicked off right in front of him at the Herberger Theater.

“I was the one yelling ‘Stop throwing shit,’” he said, referring to clearly audible shouts on footage of the melee. “Because I knew it was going to escalate.”

“I’ve never been a police activist,” he said, adding he would turn somebody in for attacking a police officer.

Now he thinks somebody needs to act as a check on police power and its abuses.

“It’s from my experience being in jail,” he explained.

After his arrest he filed articles of incorporation with the Arizona Secretary of State’s Office to form a non-profit called the Arizona Foundation for Victims of Police Abuse.

He’s got a list of issues he wants to take on.

He wants to help with bail. When he was in jail and court he noticed numerous people who just couldn’t afford to make $100 bail and they stayed behind bars on charges such as driving without a license.

He noticed some people had to wait 10 hours to make a phone call. Others stayed in jail because they couldn’t get a good lawyer, like he could. When he got the phone number, he wrote in on his leg.

He wants police to manage protests with more restraint.

“No matter what side you’re on, you have a right to assemble. I wasn’t warned. If we were, we would have left. We were attacked by humans who just decided it was time to go,” he said.

He’s frustrated by the number of police-involved shootings in metro Phoenix.

“We killed more people here that in New York and Chicago,” he said, citing a news story he read.

“Besides the ACLU, there isn’t a non-profit doing what I want to do,” Cobin said. “I have big ambitions.”

First of those is to clear his reputation.

After the video of his actions on August. 22 did a few laps around the internet, his family didn’t ask him how he was doing, but what he was doing. His friends never questioned the police response.

“I got judged by a 15-second video clip that went viral, not the 30 minutes before that,” Cobin said.