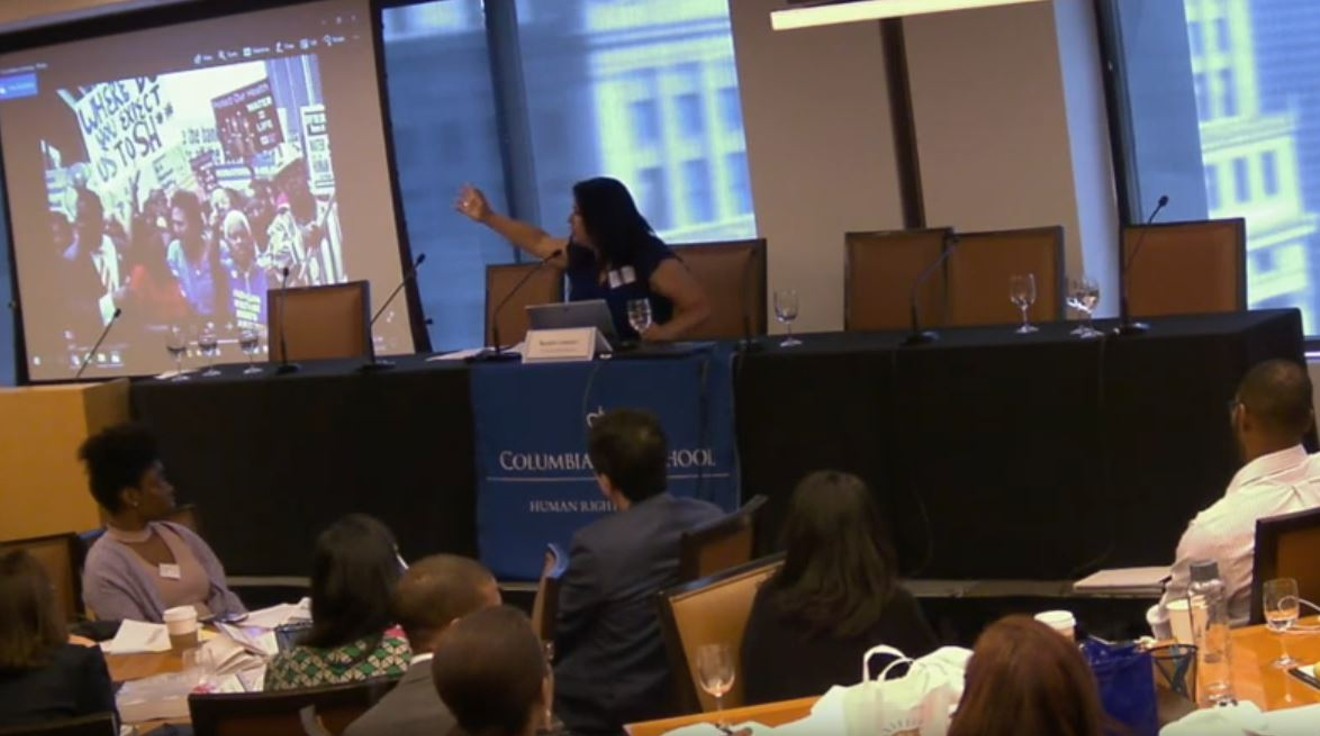 Rosalee Gonzalez at Columbia University in June 2018. YouTube/Columbia University
The Arizona-based former executive director of a national social-justice group claims in a lawsuit that she was scammed with the false hope of health insurance, then fired when she accused board members of breaking the law.

Rosalee Gonzalez, an expert on indigenous people and recent faculty member at Arizona State University, first filed her lawsuit against the U.S. Human Rights Network in Maricopa County Superior Court back in March, alleging wrongful termination, retaliation, and breach of contract. Her case was forwarded to federal court on April 20.

Gonzalez, who didn't return messages for this article, has a Ph.D in philosophy from ASU, where she taught classes including "Diversity and Oppression" and "Theory of Work and Labor" from 2007 to December 2018, and is now on leave, according to her LinkedIn page.

Rosalee Gonzalez
Arizona State University
The Human Rights Network hired her in January 2019 as its executive director, her complaint states. She was to make $125,000 a year and work for the organization from her home in Arizona.

"We welcome her transition as Faculty at Arizona State University to join us and serve the Network in this new leadership role," the group said in a December 21, 2018, Facebook post announcing her hiring. (In a YouTube video shot in June 2018, Gonzalez is introduced as the group's acting executive director; it's unclear how long she held the "acting" title before her January 2019 hiring.)

Based in Atlanta, the Human Rights Network was formed in 2003 after meetings by "more than sixty of the most prominent and influential human rights and social justice activists" in the country, its website states. The group engages activists to work together and collaborate more on ideas to address inequities, the site says, noting that it has put on "six national gatherings and more than thirty regional, state, and local gatherings" since its inception.

Carlos Garcia, one of the four board members who weren't named, also represents Phoenix District 8 as a council member.

The Human Rights Network's employee handbook specified that all positions except for hers were "at will," meaning the other employees could be fired without cause. The employment agreement Gonzalez had with the group gave her vacation, personal, and sick time, plus reimbursement of any business expenses she had to pay herself. But the USHRN "illegally classified Dr. Gonzalez as an independent contractor." Unlike other employees, she couldn't sign up for health care, earn time off, obtain long- and short-term disability or life insurance, enter a retirement plan, or receive worker's compensation, unemployment benefits, or an employer's portion of income taxes.

Gonzalez raised the issue of her "misclassification" and denial of benefits with the board in June 2019. She brought it up specifically with Johnson-Blanco and Tars a month later when the lack of health benefits made her miss treatments for chronic health conditions. She raised the problem of her employment status again in front of the board and "key stakeholders" in November, then Johnson-Blanco and Tars when she suffered a "dental emergency." All that complaining only drew the board to give her more "scrutiny." They fired her "without notice" on or about November 22. In addition, the group "withheld and delayed" payment of her final wages.

Gonzalez wants a jury to grant her compensatory damages for lost wages and other expenses — with interest, punitive damages, and attorneys' fees.

Messages left at the Human Rights Network's Atlanta office for Johnson-Blanco also were not returned.

The group has until May 11 to file a response to the complaint, records show.
KEEP PHOENIX NEW TIMES FREE... Since we started Phoenix New Times, it has been defined as the free, independent voice of Phoenix, and we'd like to keep it that way. With local media under siege, it's more important than ever for us to rally support behind funding our local journalism. You can help by participating in our "I Support" program, allowing us to keep offering readers access to our incisive coverage of local news, food and culture with no paywalls.
Make a one-time donation today for as little as $1.