Arizona Senate a National Leader in Gender Equality; So Why Is It So Terrible to Women? 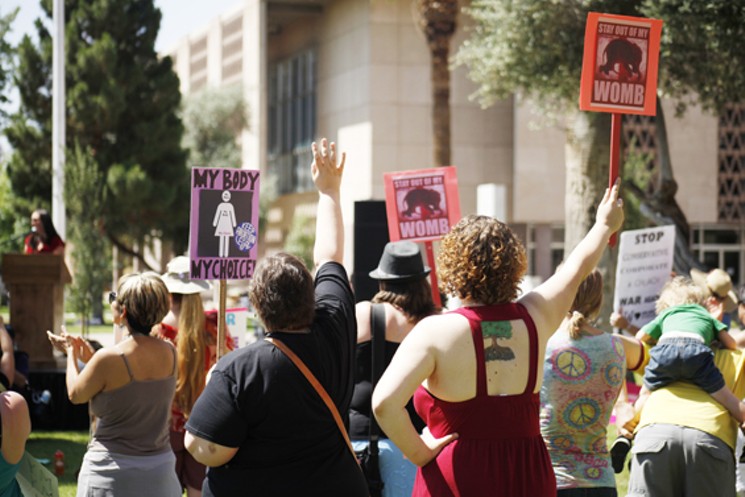 Jamie Peachey
Here's a fun fact that you may not know: The Arizona State Senate has more female members, proportionally speaking, than any other state legislative body in the entire country.

According to Representation 20/20, which advocates to get more female candidates into office and puts out an annual gender parity report, Arizona is doing better than supposedly progressive states like California when it comes to the number of women who hold elected positions in government.

Unfortunately, having nearly equal representation hasn't stopped the state Senate from passing laws that are terrible for women.


In March, a majority of female state senators voted to pass SB 1367, the "Born Alive" bill.

Also nicknamed the "Fetus Torture Bill," it requires doctors to do everything possible to resuscitate an aborted fetus that's born alive — even when there's no chance that it could survive outside the womb.

It's extremely rare for aborted fetuses to be born alive, which raises the question: Why is this an issue that the Arizona Legislature needs to be addressing?

While the bill was being discussed, pro-life advocates made the argument over and over again that even if the law only saved one life, it would be worth it.

But let's be clear about what's really going on here: Legislation like this is part of what's been deemed "the stealth war on abortion," in which Republican-controlled state legislatures pass hundreds of unnecessary, overly complicated laws in hopes of eventually forcing abortion clinics out of business.

The latest iteration, the "Born Alive" bill, passed a final third read in the Senate with an 18-11 majority. Nine female senators voted in favor of the bill, and five were opposed.

Notably, Catherine Miranda, a Democrat with a long history of being anti-choice, crossed party lines to vote in support of the bill.

Then, in May, the State Senate rubber-stamped Republicans' end-of-session attack on Planned Parenthood.

SB 1527, introduced in conjunction with the 2018 budget, included language requiring the state's Department of Health Services to apply to manage the roughly $5 million a year that the state receives in Title X funding.

Currently, the majority of that money goes to Planned Parenthood. They use it to operate clinics that primarily serve low-income women of color, many of whom don't have health insurance.

But since the Department of Health Services is prohibited by law from contracting with abortion providers, the change would lead to those clinics losing funding and potentially closing as a result.

"This is targeting communities like Maryvale, or the old-town working-class center of Mesa, or the neighborhoods in north Phoenix that are filled with immigrants and single-parent families," Planned Parenthood Arizona CEO Bryan Howard told Phoenix New Times when the bill was introduced.

"Those are the neighborhoods that are going to lose access to health care, all in the name of wiping Planned Parenthood off the map."

The bill passed the State Senate with a 17-13 majority that split along party lines. Eight female senators voted in favor of it, and six against.

And these are just the highlights from 2017, which by all accounts was a relatively subdued year in the state Legislature.

The point being: Equal representation is great and undeniably important, but it will only get women so far.