Why Women Are Mailing Tampons to the Arizona House of Representatives 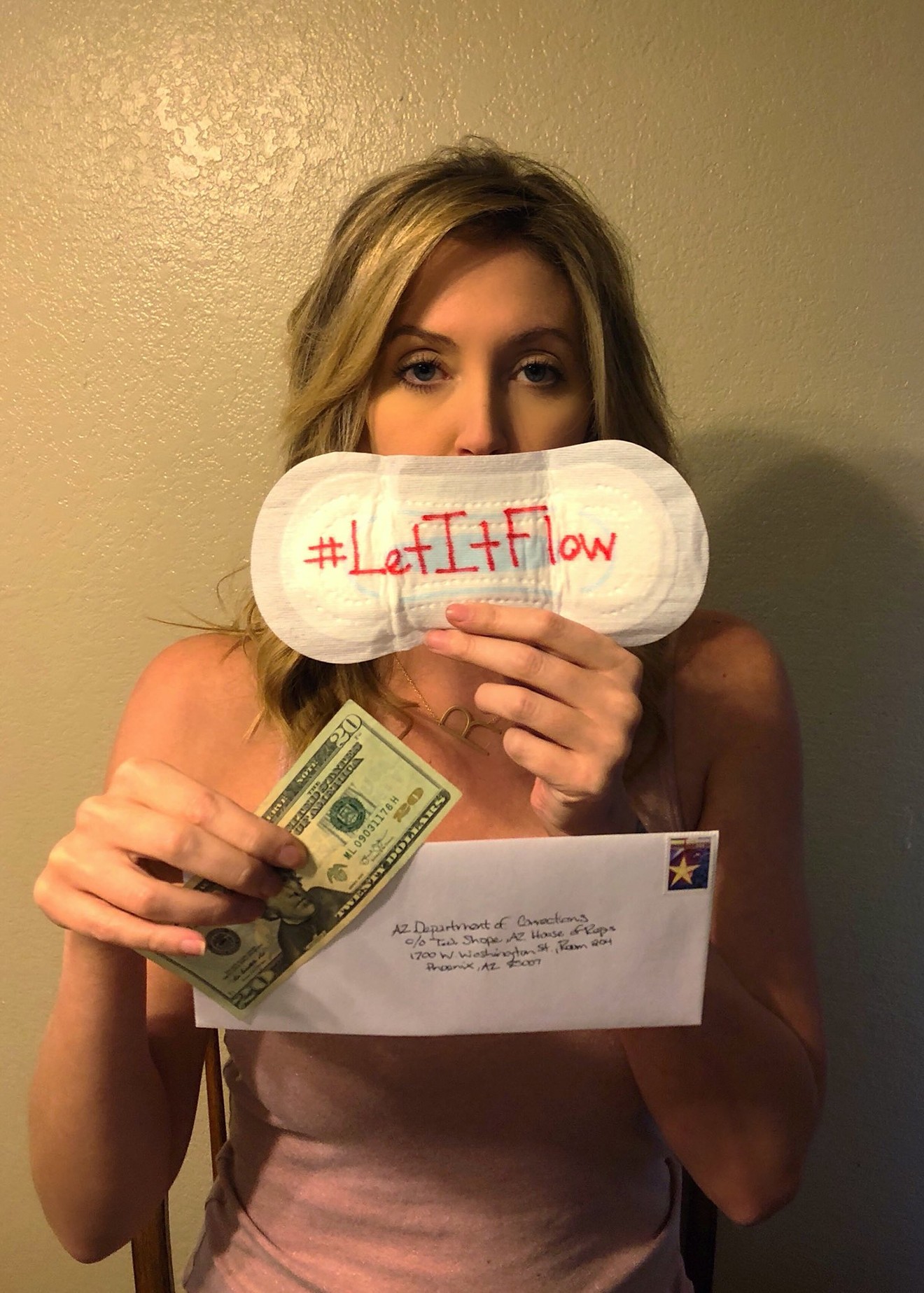 Courtesy of Christy Love
A bill that would provide unlimited menstrual supplies to incarcerated women in Arizona prisons has stalled in the House of Representatives, so women are protesting by mailing pads and tampons to the Capitol.

House Bill 2222, which was introduced by Representative Athena Salman, a Democrat from Tempe, can't advance further unless it gets a hearing in the House Rules committee.

And so far, Representative T.J. Shope, a Republican from Coolidge who chairs the committee, hasn't put it on the agenda.

So activists are taking matters into their own hands by sending pads, tampons, and cash intended to be used to purchase feminine hygiene products to the Department of Corrections, by way of Shope's office at the House of Representatives.

Currently, female inmates receive only 12 pads a month. If they need additional menstrual supplies, they have to purchase them from the prison commissary — which can quickly become a financial burden when they make as little as 15 cents an hour.

.@TJShopeforAZ, please give #HB2222 a hearing ASAP. It's inhumane to deny women access to tampons and pads! In the meantime, I'm mailing you a few thing to pass along to the AZ Dept of Corrections #LetItFlow pic.twitter.com/t2ptXnRTLe

Amazon: 100/cs. tampons for $30! I just ordered a case and had them shipped to @TJShopeforAZ. Let's "flood" him with sanitary napkins and tampons. Here's the link. HOSPECO MT100FS Tampons, Original, Regular Absorbency. I'm going to send pads to @jlawrenceLD23.


"We should all be outraged that our state Department of Corrections believes it is acceptable to limit incarcerated females’ access to free feminine hygiene products," one participant, Stephanie Hendriks, explained. "All women know 12 thin pads a month is not enough to soak up menstrual blood. And yet apparently our legislators don’t want to hear about it."

Rebecca Olsen McHood, who's currently running as an independent candidate for the State Senate, described lawmakers' reluctance to advance the bill as "such a glaring example of patriarchy, and why it’s not okay to have only men in the position to make these choices."

"To have women begging men for their feminine needs is just unconscionable," she said. "It’s unfathomable."

Shope said that he's currently checking to see whether the Department of Corrections can accept the donations. If not, he'll be donating them to a women's shelter in his district.

"This hasn’t changed my opinion that this should be an internal policy and not a state statute," he wrote in a Twitter DM, adding that his understanding is that the Department of Corrections will be updating their policies within a week or two.

But the activists sending tampons to Shope's office are skeptical. They want to see the right to unlimited menstrual supplies permanently codified in state law.

"Without a legislative solution, which Representative Salman’s bill would be, the DOC can change its policy at anytime it wants," Hendriks pointed out. "It seems to me Representative Shope is not valuing the dignity of incarcerated females or he would make sure there’s a permanent solution to the lack of access."

McHood Olsen agrees. "Without very specific legislation, there’s no guarantee that this problem will be fixed," she said. "We do not trust legislators to make backroom deals to solve this problem."