The James Beard Awards, arguably the most prestigious accolades in the culinary realm, are back after a two-year hiatus.

The awards were abruptly canceled in 2020 amid concerns of a lack of diversity and allegations against some nominees, coupled with COVID-19’s impact on the food world. The James Beard Foundation took time to audit the awards, which have now returned with the 2022 theme "Gather for Good."

In this year's competition, three Arizona chefs and one restaurant were named as finalists. During a star-studded ceremony on Monday, June 13, the winners were announced.

Chris Bianco won the award for Outstanding Restaurateur and Don Guerra of Barrio Bread in Tucson won the title of Outstanding Baker.

What began as Pizzeria Bianco in a quaint Phoenix grocery store in 1988, with lines that were known to snake their way around the building hours before service, has expanded into multiple locations, a pasta joint, a sandwich shop, a bar, and an upcoming Los Angeles pizzeria. Award-winning chef and restaurateur Chris Bianco.
Chris Malloy
The man behind the magic, Chris Bianco, is no stranger to the James Beard Awards. He won in the category Best Chef Southwest in 2003, making him the first pizzaiolo to ever do so. Pizzeria Bianco was also a James Beard finalist for Outstanding Restaurant in 2020, before the awards were canceled.

At one point, Bianco’s doctor advised him to step away from his 18-hour days at the wood-fired pizza oven on account of baker’s lung, a form of occupational asthma caused by airborne flour. But his redirected efforts proved to be a silver lining.

Bronx-born Bianco expanded his menus to include mozzarella, tomato, and basil sandwiches on fresh rounds of focaccia and hand-rolled tonnarelli alla gricia with guanciale, an egg pasta that has a wider surface than spaghetti which allows the salty pecorino romano and hearty pig cheek to adhere to it.

And that says nothing of the pizza that made him famous in the first place — a marinara with just tomato sauce, oregano, and garlic atop his famous dough, or the Rosa with Parmigiano-Reggiano, red onions, rosemary, and local pistachios.

Bianco is a purist at heart. “Use the best ingredients you can and keep at it. Don’t quit. You learn things when you burn things,” Bianco wrote in his 2017 book, “Bianco: Pizza, Pasta, and Other Food I Like.”

At the James Beard Awards ceremony Monday night, the chef was a little less poetic, but nonetheless humble.

"I started a pizzeria in 1988 I didn't know what the fuck I was doing then, I don't know what I'm doing now," Bianco said through tears. "But what I do know is that I'm grateful."

Bianco thanked his family, his team, and another Arizona nominee, Giovanni Scorzo of Andreoli Italian Grocer in Scottsdale, for his mentorship.

For Don Guerra, the path to baking was a winding one. He grew up kneading dough with his mom and eating his nana's tortillas, before he studied anthropology at the University of Arizona, worked in a few Flagstaff bakeries, then taught K-12 education in Tucson.

But the baking is what stuck and Guerra opened Barrio Bread in Tucson in 2016 after he outgrew making bread from his garage, a project that began in 2009. 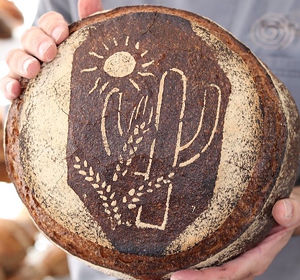 Barrio's lovely Locavore loaf showcases three organic local flours and a desert scene.
Barrio Bread
At Barrio Bread, the daily bread menu, made with local organic flour and heritage grains, can change without warning depending on what's freshly available. The Barrio baguette is a tried and true classic for sandwiches or bruschetta, while the Birote is a traditional Guadalajara-style bread made with a sourdough starter: crunchy on the outside and soft on the inside with hints of lemon and beer malt. Stop by on Saturday to try the Jalapeno-Cheddar, the pungent cheese complimenting the spicy peppers, or the Olive Fougasse, a flatbread with plenty of Greek olives.

Guerra was a James Beard semifinalist for Outstanding Baker in both 2019 and 2020 and now he brings home the award to Tucson. After winning only the second award of the night, Guerra made his way to the stage.

"I've been making bread for three decades, I never imagined I'd get here," he said, before thanking those who make his bread possible, from his family, and staff, to the farmers that grow the grain.