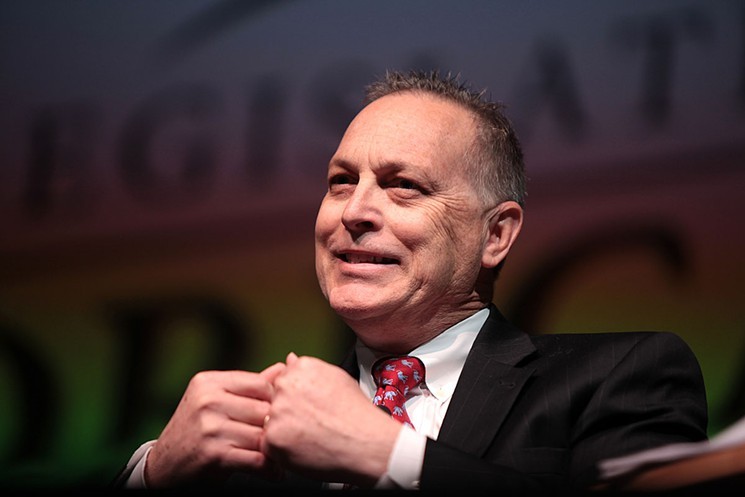 Familiar names and faces continue to pop up in public hearings of the House select committee investigating the January 6, 2021, attack on the U.S. Capitol, as federal prosecutors continue to slowly peel the curtain back on Arizona’s integral role in the unrest.


On Tuesday, in the seventh public hearing, U.S. Representative Stephanie Murphy, a Florida Democrat, revealed new information about the part Arizona Republicans played in the insurrection.


Lawmakers from close to home played a significant role in former President Donald Trump’s failed plot to overturn the election, even after the Electoral College affirmed President Joe Biden's victory.

One revelation centered around a strategy meeting at the White House on December 21, 2020, in which Republican members of Congress gathered to discuss then-Vice President Mike Pence’s role in tabulating electoral votes, the committee reported on Tuesday.


“According to White House visitor logs obtained by the committee, members of Congress present at the White House on December 21 included Congressmen Andy Biggs … and Paul Gosar,” Murphy said.

In closed-door testimony, former White House aide Cassidy Hutchinson said that members of Congress "felt that [Pence] had the authority to ... [send] the electors back to the states," according to an April court filing.


Biggs and Gosar, the representatives from Gilbert and Mohave County, respectively, sought presidential pardons along with the state’s two other Republican reps, David Schweikert and Debbie Lesko, five days after the riot.  Biggs specifically sought one for himself, according to material released by the committee last month.


Biggs has denied that.


Still, he and Gosar delivered speeches on the floor to decertify the 2020 general election result in Arizona, where Biden defeated Trump by the narrowest margin of any state.


“We know that the president met with various members about January 6 beforehand,” Murphy said, referring to Biggs and Gosar, among others.


In the email, Brooks said he didn’t recruit other lawmakers to join in the “January 6 effort” because “only citizens can exert the necessary influence on senators and congressmen to join this fight against massive voter fraud and election theft.”


In an earlier hearing, it was revealed that Trump told acting U.S. Deputy Attorney General Richard Donoghue to “just say the election was corrupt. Leave the rest to me and the congressmen,” presumably referring, in part, to Biggs and Gosar.


“President Trump was trying to convince Vice President Pence to do something illegal,” Murphy said. “White House counsel confirmed all of that in testimony last week.”


The committee probe requested cooperation from Biggs, who made it clear in a written statement that he refused to assist the committee, dismissing it as a mainstream media-fueled "sham" aimed at disgracing Republicans on the national stage.

Even Lesko Was Worried

Lesko, who did not attend the December 21 meeting, was concerned on the eve of the January 6 riot, the committee also revealed on Tuesday.


On January 5, 2021, Lesko said in a video released by the House committee that she “asked leadership to come up with a safety plan for members.”


“I’m actually very concerned about this because we have who knows how many hundreds of thousands of people coming here,” Lesko said. “We have Antifa. We also have, quite honestly, Trump supporters who actually believe that we are going to overturn the election, and when that doesn’t happen, most likely, they are going to go nuts.”


“Stop the Steal” architect Ali Alexander also tied himself to Gosar in recent testimony to the House committee. He touted that he and Gosar planned the event, calling Gosar his “spirit animal” at a 2020 rally in Phoenix.


Alexander went on to testify in federal court that he and Gosar had "a few phone conversations” ahead of the onslaught. He also coordinated the deadly riot with Arizona State Representative Mark Finchem, text messages released last year show.


Finchem and Arizona State Representative Anthony Kern, a Glendale Republican who’s also tied to Alexander, fraternized with rioters on the Capitol steps ahead of the attack, the texts and social media posts confirmed.


In earlier hearings, the House committee noted that Arizona’s faction of the alt-right domestic terrorism group Proud Boys pushed the raring crowd toward violence in front-line exchanges with Capitol police.


The U.S. Department of Justice also subpoenaed Arizona Republican Party Chairwoman Kelli Ward and her husband, Michael, for phone records the agency believes contain evidence of their involvement in a plot to send fake electors to Congress.

The Wards, as well as Kern, Arizona State Representative Jake Hoffman, and U.S. Senate candidate Jim Lamon declared themselves electors for Trump. Finchem, who is running for Arizona Secretary of State, was a key figure in coming up with the list of fake electors, it's been widely reported.


The Wards sued the House committee in federal court in Phoenix to keep the records mum. That lawsuit is pending.


As federal prosecutors continue to release their findings, Arizona’s central role in last year’s attack on the nation’s capital will become clearer.