Courtesy of Rebecca Olsen McHood
Despite repeated requests from the East Valley NAACP and Black Lives Matter Phoenix, Governor Doug Ducey has stubbornly refused to remove Confederate memorials from state grounds — even in the wake of the recent white supremacist attack in Charlottesville.

So on Tuesday afternoon, after watching the president claim that there were "very fine people on both sides" in Charlottesville, Rebecca Olsen McHood decided to take matters into her own hands.

"I was just so outraged by Trump’s press conference," the Gilbert-based activist tells Phoenix New Times. "I thought, I have to do something."

That's when she got the idea to turn the Confederate memorial at Wesley Bolin Memorial Plaza, outside the Arizona Capitol, into the world's largest participation trophy.

Courtesy of Rebecca Olsen McHood
McHood is white, so she checked with a handful of her nonwhite friends and asked if it was too soon. They assured her that it wasn't. She immediately got to work crafting two banners that say "2nd Place Participant" and "You lost, get over it." Then she and friend drove over to the Capitol.

"I wasn’t sure what was going to happen — I wasn’t sure if people were convening at Confederate monuments around the state or not," she says. "I know we have some white power people who like to have little rallies, but they get, like 20 people, so I wasn’t too concerned for my safety."

When they arrived, no one was around except a cop idling nearby in an SUV who appeared to be guarding the statue.

"The cop came up and said, 'You can’t attach anything,' so we just kinda laid it over the monument," McHood says. She snapped a couple of pictures, then headed to the DACA rally that was happening nearby. 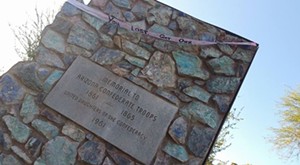 Courtesy of Rebecca Olsen McHood
Since posting the photos to her Facebook page, she's gotten a lot of support and, surprisingly, no pushback yet.

"It felt good to do something," she says. "White supremacists don't speak for me, and it's not okay that Trump is condoning it. It's disgusting."

McHood, by the way, is no leftist. In fact, she's a registered Republican. Although she didn't support Trump, she volunteered on George W. Bush's campaign and voted for McCain and Romney in subsequent elections. (She also says that she was "really happy with the job that Barack Obama did" and cried when she watched him be sworn in as the first black president.)

"I am a Republican — I'm for fiscal responsibility, and integrity in politics," she explains. "There was a time when I believed Republicans had the upper hand in that."

Now, she says, she's disappointed by Ducey's unwillingness to remove the memorials, and the fact that she hasn't seen any of her elected representatives in "super conservative Tea Party land in Gilbert" denounce Trump's statements.

"There’s no room for racism anymore, and it’s not okay that our president is standing up for Nazis. It’s abhorrent — I have no words for it."

Wondering why Arizona has Confederate monuments, anyway? Read this. And you can sign a petition asking Ducey to hold a public hearing on the monuments here.