JM Photo
Move over margaritas, there’s a new crop of Mexican spirits shaking up the Phoenix cocktail scene. Chances are you’ve heard of mezcal, but with lesser-known agave-distilled spinoffs sotol and bacanora now invited to the party, craft cocktails are getting even craftier. Here are five spots to sip the Mexican spirits in specialty cocktails around Phoenix, from a basement agaveria to a lively rooftop bar.

123 West Main Street, Mesa
480-398-8129
Why walk in through the front door of Espiritu Cocktails + Comida, a buzzy new cocktail bar in downtown Mesa, when the alley entrance is so much more alluring. Just head down the narrow passageway lit by the pink glow of the neon sign – no password or reservations required… yet – and enter a sexy space garnished with green walls, gilded picture frames, dangling plants, and drippy candles. The menu of Mexican ceviches, aguachiles, and even an upscale grilled cheese won’t disappoint – the place is owned by the culinary trio behind Bacanora and Tacos Chiwas, but the backlit bar is where it’s at. Espiritu serves playful yet purposeful cocktails designed by mixologist Adrian Galindo that transform bacanora, mezcal, and tequila into dazzling, dynamic drinks, much like Adrian himself. Start with the Sonoran Sling, a spicy sip with chiltepin-infused bacanora, Grand Marnier, charred pineapple, and molé bitters and end with La Muerte, a tiki-tinged sip made with Paranubes Mexican rum, vanilla liqueur, tawny port, bourbon barrel-aged maple syrup, angostura bitters, lemon juice, pineapple juice, and soda water.
click to enlarge 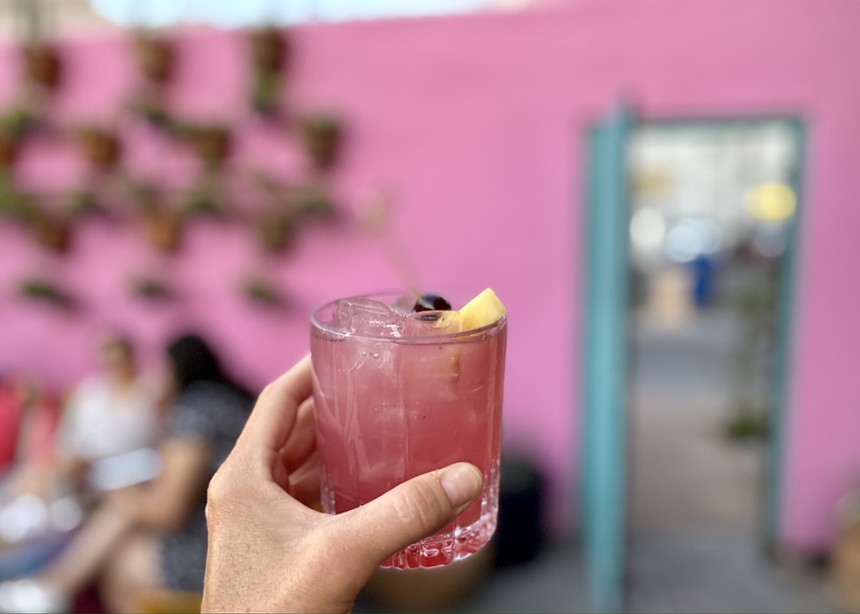 The Telesto from Barcoa Agaveria mixes mezcal wine with pineapple and passion fruit for a punchy, tropical taste.
Allison Young

829 North First Avenue
602-980-0788
Don’t be intimidated by the drink menu at Barcoa Agavaria, the moody basement bar in downtown Phoenix that specializes in all things agave. The multi-page manual guides you through the finer points of resposado and mezcal, and with 100 tequilas and 100 mezcals available, there is no shortage of options, plus staff is super savvy if you want to dive deeper (co-owner Grant Gardner is a master mezcalier, after all). Drink in the dark, boozy, intimate setting while sipping a signature cocktail: Telesto mixes MG Mezcal Gin, a small-batch handcrafted spirit that sings with juniper and Mexican spices, with pineapple, passion fruit, and piloncillo for a punchy, tropical taste. Rosemary’s Ofrenda is spiked with both artisanal mezcal and Ancho Reyes, a spicy liqueur crafted from ancho and poblano chiles, plus peach, lemon, agave, and a sprig of rosemary for a balanced sip that hits all the right notes.

Sotol's Sotol So Good and Forbidden Dance with Mango make for a double-first party.
Allison Young

313 North Gilbert Road, Gilbert
480-550-6300
Sotol So Good is… so good! The perfect smooth yet sublime summer sip to enjoy on Sotol’s lively rooftop bar above the Heritage District in downtown Gilbert. The star of the show here is sotol, a Mexican spirit distilled from a different kind of agave known as the desert spoon, that’s smoky and earthy like its cousin mezcal, but with brighter notes. Coconut rum, pineapple, and lime add tropical notes, while the infusion of butterfly pea powder, a powder made from an Asian plant known for its brilliant blue flowers, gives it its striking hue. The sexy siren is then rimmed with coconut cream and salt. Order up the Nopales Fritas, crispy cactus petals and yucca fries drizzled in a cilantro lime sauce, for a perfect pairing.

Just a few of the many sotols at Testal Mexican Kitchen.
Jacob Tyler Dunn

1325 Grand Avenue
602-384-9993
It’s easy to mistake Testal Mexican Kitchen for another burrito joint, but it’s so much more. Specializing in the food and beverages of Chihuahua, Mexico, flour tortillas are made fresh throughout the day right before your eyes and turned into savory pockets folded with slow-cooked pork, roasted poblanos, shredded beef, chile verde, and creamy potatoes, plus a full roster of vegan burritos. But the real surprise here is the sotol offerings, a lengthy list of bottles ranging from herbaceous to tropical that can be sipped neat or turned into a cocktail… or 10 to be exact. Testal’s sotol cocktails run the gamut from sweet to spicy, with standouts like the Guava Sotol Mule, a delightfully fizzy sip spiked with guava puree and ginger beer, and the Vampiro Norteno, a spicy tomato cocktail made with Sotol Puntagave, an organic agave, wild-harvested in Northern Mexico, and Testal’s top-secret michelada mix that might just cure your hangover.

1301 Grand Avenue
602-612-4018
Meet Bacanora the restaurant, a bright slice of a spot on Grand Avenue where chef and owner Rene Andrade gets to show off his Sonoran roots – and chops – by charring chicken, searing carne asada, and blackening elote over the open flame of his mesquite-fired grill, the only cooking method in the house. Now meet bacanora the booze, the once-illegal agave spirit from Sonora that tastes like a friendlier, less smoky mezcal. The two meet with the must-order Bacanorita, a mix of earthy Santo Pecado Bacanora and bright Campo Azul Tequila, with orange liqueur, agave nectar, and fresh lime juice, capped off by a lip-zinging citrus sugar and chiltepin pepper rim that just happens to go with everything on Andrade’s succinct menu.
KEEP PHOENIX NEW TIMES FREE... Since we started Phoenix New Times, it has been defined as the free, independent voice of Phoenix, and we'd like to keep it that way. With local media under siege, it's more important than ever for us to rally support behind funding our local journalism. You can help by participating in our "I Support" program, allowing us to keep offering readers access to our incisive coverage of local news, food and culture with no paywalls.
Make a one-time donation today for as little as $1.