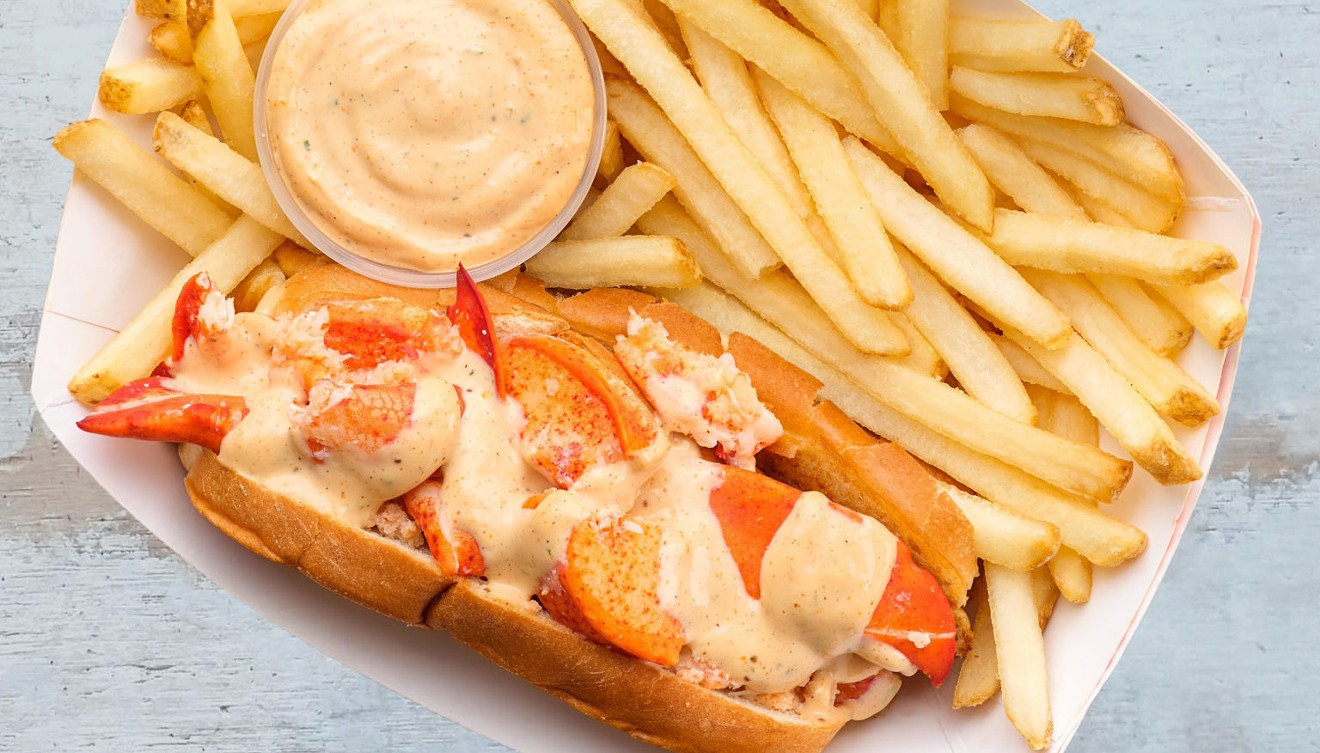 Tony and Roushan Christofellis, who sold their interest in Salad and Go this summer, have opened the Valley’s first Angie’s Lobster at 835 West Baseline Road in Tempe. The restaurant welcomed a long line of customers at its formal opening on Tuesday, November 30.

Angie’s Lobster is touted as the “Home of the $9.99 Lobster Meal.” The meals offer a choice of either a lobster roll on a toasted bun or four fried lobster fingers and a toasted bun, along with fries and a choice of lemonade or iced tea. A dip, Angie’s Sauce, is included on the side.

The Tempe restaurant is currently operating out of a food truck – called the “Delay Buster” – until the build-out of the drive-thru is complete in early 2022. Customers can order via walk-up service or by using a QR code from 11 a.m. to 8 p.m. daily.

The inspiration for Angie’s Lobster is Tony’s mother, Angela “Angie” Christofellis, who was born on the Greek island of Lesvos and moved to Boston at a young age. Angie was an immigrant single mother of two who worked in seafood restaurants her entire life before opening Angela’s Seafood outside of Boston. She passed away from cancer in 2020.

“Angie’s Lobster was created to honor our mother and make sure that the love we feel every day gets passed on to the next generation and to future generations,” says Tony Christofellis. “She was a true force of nature. … She taught us by example to help others when they need help, to love not just our family but also our fellow man, and to serve others, rather than being a boss and having others serve us. She was the most courageous person we knew.”

How does Angie’s Lobster offer wild-caught lobster for under $10 when other places charge $30? According to its website, the restaurant has the fewest staff working per hour in the drive-thru industry, with eight team members on staff per store, while most drive-thrus have 20-75 per store.

The restaurant only accepts debit/credit cards and EBT, and doesn’t invest in packaging.

“We give you a paper tray with no lid, one napkin, a straw-less lid, non-branded drink cup, and non-branded paper bag,” says the website. “Our packaging is meant to work, not mean to be pretty.”

Meals come with no receipt, and no salt, pepper, sugar, or ketchup packets.

Angie’s Lobster buys its crustaceans direct from Maine and Canada, transports the lobsters themselves, and doesn’t use distributors. It doesn’t cut corners with inferior langoustine (Norwegian lobster) or warm-water lobster – but does purchase visually imperfect lobster.

“But it tastes the same,” the website says. “We don’t mind if a claw is broken, do you?”

And don’t expect to see much advertising from the new restaurant.

“We don’t invest in marketing; our money goes into our food and people,” says the website.

Angie’s Lobster
835 West Baseline Road, Tempe
Open 11 a.m. to 8 p.m. daily
KEEP PHOENIX NEW TIMES FREE... Since we started Phoenix New Times, it has been defined as the free, independent voice of Phoenix, and we'd like to keep it that way. With local media under siege, it's more important than ever for us to rally support behind funding our local journalism. You can help by participating in our "I Support" program, allowing us to keep offering readers access to our incisive coverage of local news, food and culture with no paywalls.
Make a one-time donation today for as little as $1.