New Orleans-style breakfast and brunch has made its way to Gilbert. Another Broken Egg Cafe
With a breakfast and brunch menu that provides something for anyone who desires a taste of the Big Easy without the long plane ride, Another Broken Egg Cafe opened its doors December 13 at 2484 South SanTan Village Parkway, Suite 108, in Gilbert, just behind Sandbar Mexican Grill.

Seasoned restaurateurs Steve Christensen and Reid Richards are responsible for bringing the Destin, Florida, chain to the desert. The New Orleans-inspired menu offers an infusion of the French countryside and the Deep South. Between its menu and cocktails, Another Broken Egg aims to tantalize the taste buds of any palette. From their Mardi Gras omelet to cinnamon roll French toast, "It's all about the food, and it's chef-inspired," Richards says.

The full-service restaurant has a bar with signature Bloody Marys and infused mimosas to help start your day, along with spiked cold brews, sodas, coffee, and hot chocolate.

According to the owners, the most popular menu item is the hash brown Benedict, which was once part of the seasonal menu. Other highlights include a lobster and brie omelet, and the crab cake Benedict. The sleeper menu item is the Sonoma club sandwich, says Richards.

For those with a sweet tooth, there are a variety of outside-the-box breakfast staples, like strawberry pound cake French toast, and lemon blueberry and goat cheese pancakes. There are gluten-free choices, like Bourbon Street pancakes, and shrimp and grits, and seasonal menu options which rotate every three months. That part of the menu currently offers eggnog and gingerbread waffles. There are plenty of kids' options as well. 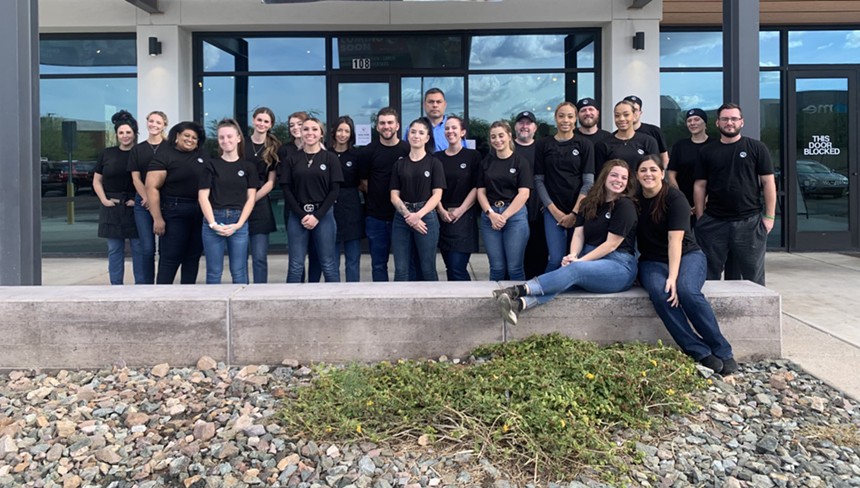 Richards and Christensen's passion for food and business started with a friendship that spans over 16 years. Christensen is from Pennsylvania and has a background in investment banking. Richards is from western New York and specializes in restaurant operations. Their goal was to provide more options for food-goers in the Valley. They previously owned four Five Guys locations in the Valley, and have switched gears with Another Broken Egg.

"We are looking to offer something different and want to make going out to eat special for people,” Christensen says.

The staff offers a touch of Southern hospitality at the front door, and the modern vibe comes complete with a side of contemporary R&B music.

Gilbert was Christensen and Reid's first choice because of the population and continued growth.

“It is all about finding the right spot, and we are excited about this spot," Christensen says.

With the grand opening in the rearview, Christensen and Richards plan to add more Another Broken Egg Cafes in the next five years, with the next one being in the Queen Creek area sometime in 2022. Other potential locations include Ahwatukee, Surprise, Peoria, and Mesa.

Another Broken Egg Cafe
2484 South SanTan Village Parkway, Suite 108
Open daily from 7 a.m. to 2 p.m.
KEEP PHOENIX NEW TIMES FREE... Since we started Phoenix New Times, it has been defined as the free, independent voice of Phoenix, and we'd like to keep it that way. With local media under siege, it's more important than ever for us to rally support behind funding our local journalism. You can help by participating in our "I Support" program, allowing us to keep offering readers access to our incisive coverage of local news, food and culture with no paywalls.
Make a one-time donation today for as little as $1.