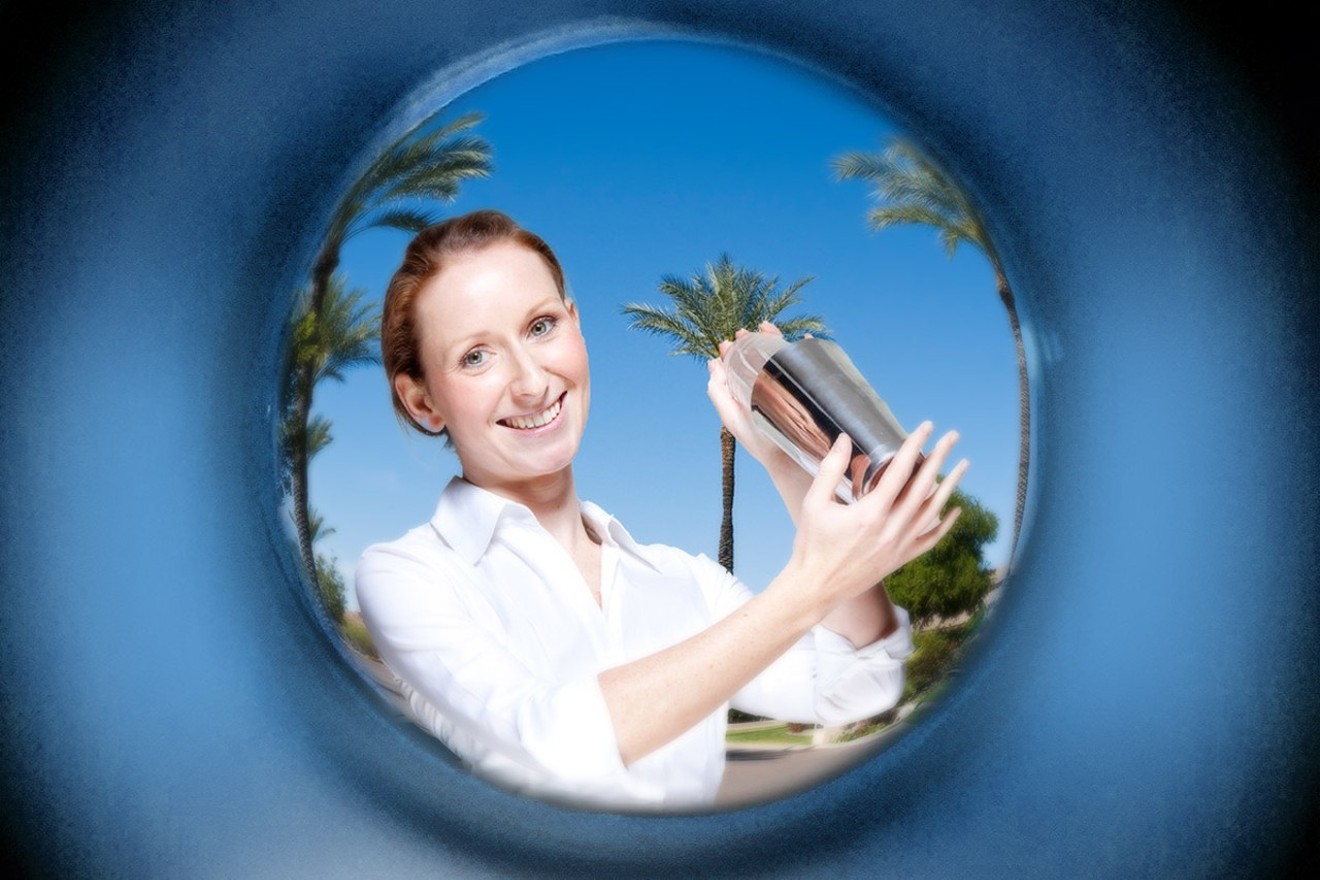 After all of this, all of us could really use a drink.

It has been a long road for restaurants over the past two years, but cocktails-to-go have become a reality and for proprietors and a new stream of cash for the state. It only took a global pandemic, a lawsuit brought by angry bar owners, and a change in state law for it to happen.

The Arizona Department of Liquor Licenses and Control began selling licenses to restaurants for cocktails-to-go on October 1 for $2,500 a pop. Bars already allowed to sell alcohol-to-go were cleared to start slinging drinks for takeout that month. More than 1,200 bars across the state were affected. But there are roughly four times as many restaurants as bars in Arizona.

Since then, about 90 restaurants and liquor store locations have licenses to sell cocktails for carryout. That's out of more than 4,100 restaurants licensed in the state — fewer than 1 percent.

While the rest of us are waiting anxiously for our doorbell to announce the arrival of some mules, greyhounds or rattlesnakes, the changes have not been so easy to swallow for bars and small restaurants. The big bars complain that changes create unfair competition, while the mom-and-pops can't afford the steep licensing fees to deliver those drinks.

The state collected $46.3 million in gross revenue from taxes on spirits during fiscal year 2020 _ up from $39.3 million in 2020, when it was closer to the annual average. 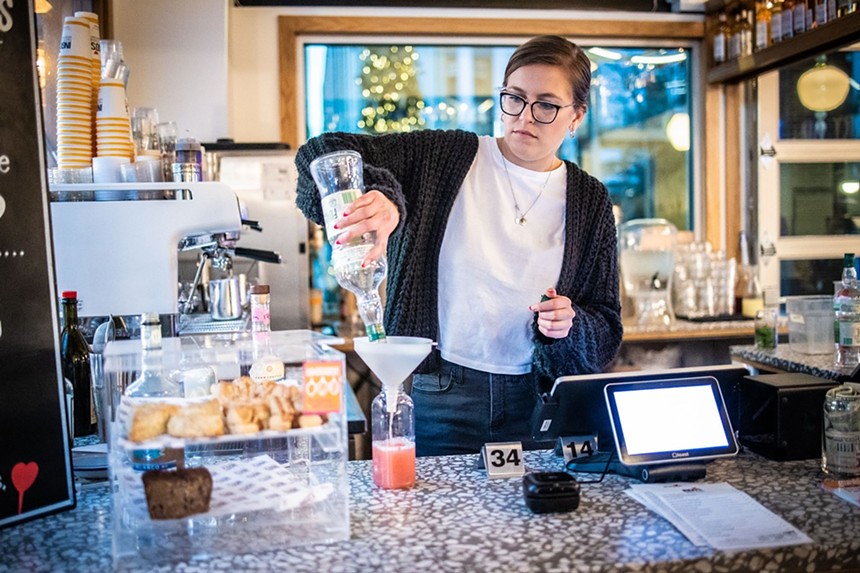 The way the system works right now, restaurants are leasing licenses from partnering bars or liquor stores. For example, La Ristra New Mexican Kitchen in Gilbert and Chandler is leasing liquor licenses for cocktails-to-go from Food City and Woodshed Bar. Restaurants pay the state liquor department, and the fee goes to the bar.

At Zipps Sports Grill at McClintock Fountains in Tempe, customers can order any takeout cocktail as long as they order a menu item, said general manager Jessica Moe. The most popular item is the bar's take on a margarita, called a Zipparita, available in a variety of flavors (Chambord, peach, Midori, Blue Curacao, watermelon, and Grand Marnier), and in 16- and 32-ounce sizes.

"We definitely haven't lost any dine-in business," Moe said. While demand hasn't been as great as the bar anticipated, she said it's increased in the past week as the news has spread. Most orders for to-go cocktails trickle in during the evening hours, from 6 to 10 p.m., she said.

Douglas Motz, the general manager of Ingo's Tasty Food on 40th Street in Arcadia, said the addition of cocktails-to-go has been a boon for business.

"We wanted to apply as soon as we had the opportunity," said Motz. "So far, it's been going great."

Ingo's offers a pair of to-go cocktails, a lavender lemonade (vodka, fresh lemon juice, and lavender) and a gin greyhound (gin, fresh grapefruit, lemon, and mint) served either on the rocks or frozen. All cocktails are available in 16-ounce cups, and the greyhound on the rocks is available in 32 ounces.

State law requires that cocktail portions are capped at 32 ounces for a single serving, but there's no limit on how many drinks each customer can buy, nor how much alcohol is in each drink. Restaurants can earn no more than 30 percent of their total sales from alcohol.

There are other limitations, too. Restaurants can't simply use a foam cup with a plastic lid and straw, covered with a small piece of tape. Containers must be sealed. Restaurants can sell mixed cocktails-to-go either at the location, by delivery, or at a drive-thru, but customers can't buy drinks without food.

Arizona House Bill 2773 changed the state's liquor laws to include cocktails-to-go at restaurants. The new law makes permanent something Governor Doug Ducey first approved by executive order during the pandemic, when restaurants were forced to limit their number of patrons. It worked.

"Businesses owners have shown that offering to-go beverages can be done responsibly and safely," Ducey said after signing the bill into law in May.

Floridino's does not appear on the state liquor board's list of applicants seeking permission to deliver booze.

Restaurant industry advocates claim that more than 1,200 businesses across Arizona lost $2.8 billion in revenue due to the restrictions during the coronavirus pandemic. Ducey's March 2020 executive order paused state enforcement of alcohol-to-go laws, but required liquor, beer, and wine to be sold in sealed containers and only to those 21 years old or older.

Restaurants, and some other businesses, can deliver beer, wine, or cocktails to-go, but it depends on the lease. If a restaurant is approved for a to-go cocktails lease, it can take orders for mixed cocktails and deliver them. If the restaurant has an off-sale lease, it can deliver bottles of beer, wine, or spirits. Restaurants and bars with the appropriate lease can also partner with delivery services to deliver drinks to customers off the licensed premises, but the delivery service must be a registered alcohol delivery contractor.

The Arizona Department of Liquor Licenses and Control registers each such contractor for a $100 fee. Registrations must be renewed annually.

Dozens of bar owners pushed back against restaurants selling booze on the fly. Bar owners argued they already pay extra for that privilege and that it was unfair for the governor to close bars, but allow restaurants to continue selling alcohol to go. In October 2020, Maricopa County Superior Court Judge Pamela Gates temporarily halted restaurants from selling cocktails-to-go, in opposition to the governor's executive order. Gates's ruling prompted the legislature to change state law. The case has since been dismissed.

During hearings when the bill was considered in the Arizona House of Representatives, long-time bar owners were incensed that restaurants would be able to sell booze out the door without a pricey license. One type of liquor license for bars is upward of $100,000 to sell alcohol on the fly, and grocery stores can pay $250,000 for such a license.

Daryl Chester, the owner of Jester's Billiards in Gilbert, argued that the new law would devalue his investment.

"It's a privilege (restaurants) have not paid for," Chester said during public testimony in February. "We had a lot of skin in the game."

Beyond that, he questioned whether cocktails-to-go would encourage driving under the influence of alcohol.

"I think it's dangerous. How many times have you gone to a drive-thru and eaten in your car on the way home?" he said. "Do you really think that a cocktail-to-go is not going to be (drunken) on the way home after you buy it to go?"

A lobbyist for retailers suggested that thousands of new locations where residents can buy liquor to go would significantly change the market dynamics.

"It's a lot of potential competitors for our grocers and convenience stores," said Mark Miller, president of the Arizona Food Marketing Alliance. "This isn't fair. It's not something that you can take away and it's not going to have consequences."

Some bar owners have invested significantly in liquor licenses over the years. David Delos, president of the Arizona Licensed Beverage Association, and owner of Tony's Cocktail Lounge in Glendale, has about $600,000 worth of liquor licenses across six different bars.

"You will hurt far more businesses than you will help," Delos told state representatives during a committee hearing.

The industry group behind the lawsuit to stop cocktails-to-go during the pandemic petitioned against the bill.

A liquor license is the most valuable asset a bar might have, said Don Isaacson, lobbyist for the Arizona Licensed Beverage Association.

"The value to that business is the license that you pass on," Isaacson said. "What going to be the impact to the people who actually paid for that license? It's going to hurt the investment."

Weninger said he is pleased the bill has been approved, but feels the $2,500 licensing fee could be too expensive for local mom-and-pop establishments wanting to serve to-go cocktails.

But, in a world filled with minimum wage hikes, staffing concerns, and supply-chain issues, Weninger said this is a much-needed win for the restaurant industry.

"I think the pandemic changed a lot of thinking," he said. "A bunch of people who said they'd never do it now does it all the time. It's not taking the place of another sale. It's like being in line at Starbucks and they have those little impulse items, so you grab one. It's just a bonus that gives more money to your bottom line."

For some, the changes in law need to mature in the cask. For other, drinks at the doorbell may not offer the smooth finish we all want.

KEEP PHOENIX NEW TIMES FREE... Since we started Phoenix New Times, it has been defined as the free, independent voice of Phoenix, and we'd like to keep it that way. With local media under siege, it's more important than ever for us to rally support behind funding our local journalism. You can help by participating in our "I Support" program, allowing us to keep offering readers access to our incisive coverage of local news, food and culture with no paywalls.
Make a one-time donation today for as little as $1.
Kristen Mosbrucker is the news editor of Phoenix New Times. Mosbrucker is a journalist who hails from the Northeast but has spent much of her career over the past decade across the South. She has interviewed everyone from business executives to homeless folks. She's covered business on the Texas-Mexico border in deep South Texas for the McAllen Monitor, technology and the defense industry in San Antonio for American City Business Journals, and the petrochemical industry in Louisiana for The Advocate newspaper. Early in her career, she spearheaded hyperlocal community news coverage for an NPR member station in Philadelphia.
Contact: Kristen Mosbrucker
Follow:
Twitter: @k_mosbrucker