The Country's Best Sake Artisan Leans Into the Wilds of Arizona 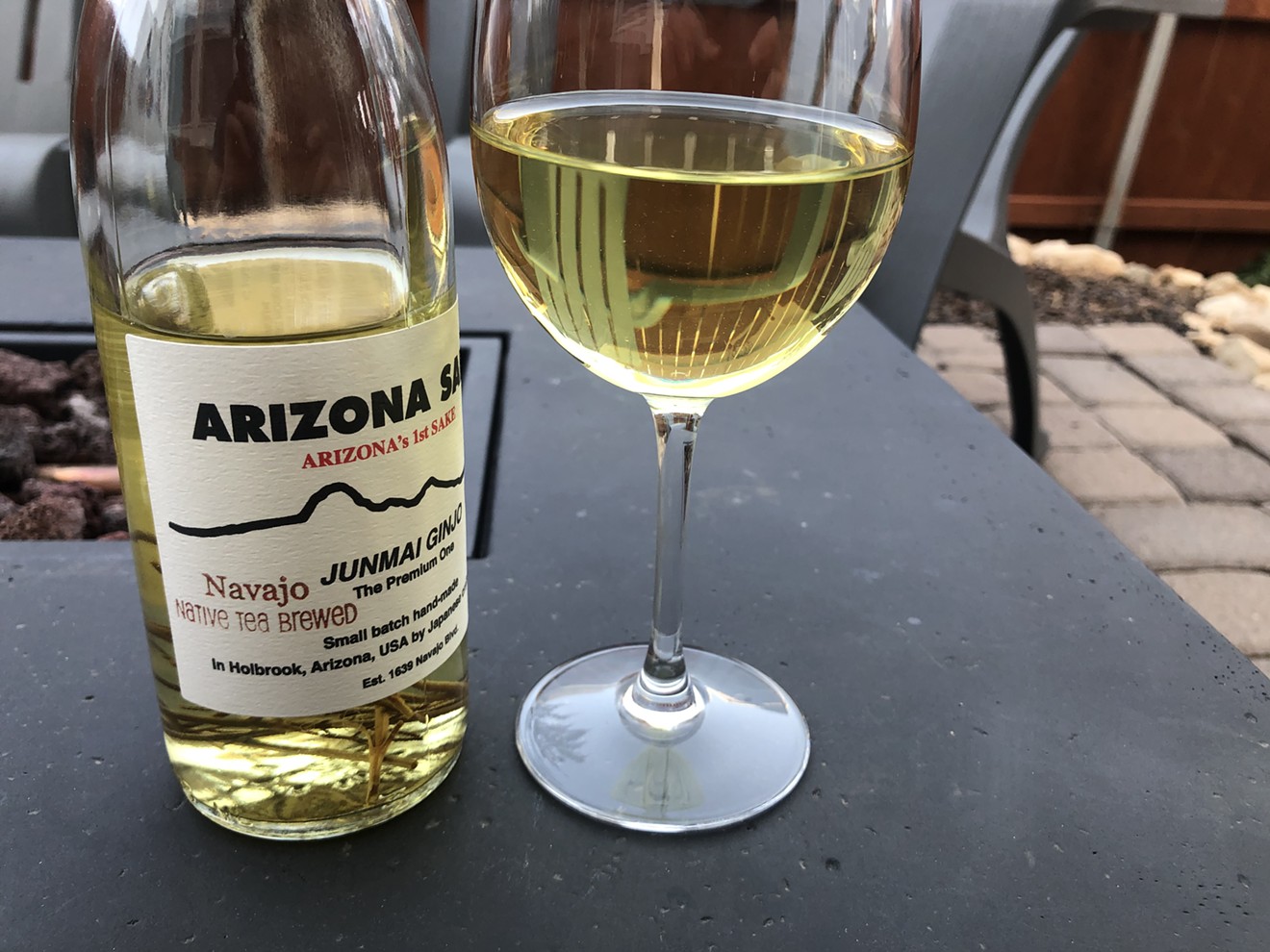 Arizona Sake's latest bottle is infused with the herb known as Navajo Tea. Chris Malloy
Welcome to Liquid Lowdown, a column that explores the strange, beautiful world of local drinks made right here in metro Phoenix (or just beyond). Snap open a can or thrum the cork from a bottleneck. Cheers. Let's get weird.

Liquid: Sake
Name: Navajo Native Tea-Brewed Junmai Ginjo
ABV: 15 percent
Maker: Arizona Sake
Where to Buy: You can find this limited release for about $30 at craft beverage vendors from Flagstaff to Tucson, but only select vendors, so call ahead.

Lowdown: Atop Arizona’s craft beverage scene, you’ll find ambitious, rigorous artisans who craft beer, cider, and mead. You’ll also find Atsuo Sakurai, co-owner and brewer of Arizona Sake in Holbrook. Famously, in 2018, Atsuo was named the best sake craftsman in the world beyond Japan by a panel in Tokyo. Recently, Atsuo released his latest bottle. It travels to a somewhat surprising place: much deeper into Arizona. 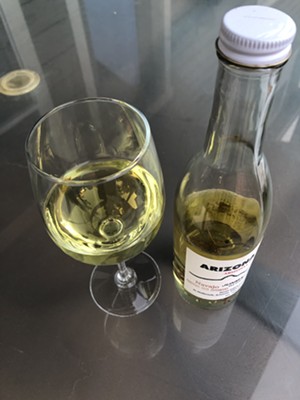 A newly opened and poured bottle of Arizona Sake, seen from above.
Chris Malloy
This bottle unites junmai ginjo, his standard sake, with Navajo Tea. Also known as greenthread, Navajo Tea is a lean, willowy-armed herb that almost looks like wild growths of long grass. Inside the bottles of pale straw-gold sake, a few sallow sprigs lean.

In Japan, sake is a notoriously strict product. Atsuo, who learned over long years of brewing in his home country, has succeeded in part by choosing wisely when to break from old strictures, for example, by using California rice. Atsuo brews with an open mind. Using Navajo Tea in such a scrupulous beverage speaks to his curiosity, his willingness to grapple with and, if all goes well, embrace the unknown.

For Atsuo, however, Navajo Tea is a known unknown.

“I was looking for something from Arizona to mix with Japanese culture, because my wife is from Arizona and she’s Navajo,” the Yokohama native says. “So my Japanese culture and her Native culture.” The idea to use Navajo Tea came from his father-in-law, the physical herbs from friends who gather.

Last year, Atsuo and his wife and co-owner, Heather Sakurai, finished building a small sake brewery. No longer does he brew in his garage, but he still makes sake in micro batches: 100 gallons at a time, up from 50. It’s still handmade with ardor and a personal touch. It’s still driven by his technique and personality.

Unlike some of his other bottles, his latest is pasteurized, a potential warper of flavor. Also, infusing such a pure, quality beverage with new flavor feels risky. How would his latest and most experimental bottle stack up?

The sake pours a clean light gold, lucent, with very faint shimmers of an evanescent green, or maybe I’m crazy. The flavor? Brilliant. Like reading a poem or seeing a painting that you can’t fully unravel with any effort of logic or reason, but that you just simply admire, dazzled, as its tonic effect sweeps you.

Critically, the Navajo Tea infusion is ghost-light. It alters his standard junmai ginjo in very small ways. In the minutes after opening the bottle, and as it warms from being chilled, its flavor seems to change.

Sallow lengths of Navajo Tea, also called greenthread, lean in the bottle.
Chris Malloy
At first, there is a deep florality, something without the usual fruity notes of his sakes. And then, maybe five minutes in, an elusive fruity flavor flashes, something in the zone of lychee. Finally, some faint lemon and a bit of peach develop, while, as ever, the sake maintains an utter minimum of sweetness. At times, you get deep milky rice notes similar to those of a great horchata but, again, no sweetness. And all the while, the early florality and herbaceous notes persist, dragging you lovingly through some far-flung meadow where Navajo Tea twists from the soil, all other flavors changing the way our state changes from north to south.

The Navajo Tea sake is masterful, just like Atsuo’s others.

“The flavor is very natural and smells like grass,” Atsuo says. “It adds in a more spiritual way, I think. It’s from our state and mother nature.”

Atsuo, who says his business has been largely unchanged since the pandemic began, still prefers his original to this light infusion. He envisions his Navajo Tea sake as one people can get for friends, a bottle channeling an essence of his current home state.

“I want people to enjoy with family and friends,” he says. “It’s a very unique souvenir so they can taste how Arizona feels in the bottle.”
KEEP PHOENIX NEW TIMES FREE... Since we started Phoenix New Times, it has been defined as the free, independent voice of Phoenix, and we'd like to keep it that way. With local media under siege, it's more important than ever for us to rally support behind funding our local journalism. You can help by participating in our "I Support" program, allowing us to keep offering readers access to our incisive coverage of local news, food and culture with no paywalls.
Make a one-time donation today for as little as $1.
Chris Malloy, former food editor and current food critic at Phoenix New Times, has written for various local and national outlets. He has scrubbed pots in a restaurant kitchen, earned graduate credit for a class about cheese, harvested garlic in Le Marche, and rolled pastas like cappellacci stuffed with chicken liver. He writes reviews but also narrative stories on the food world's margins.
Contact: Chris Malloy
Follow:
Twitter: @yollamsirhc
Instagram: @malloy_chris/