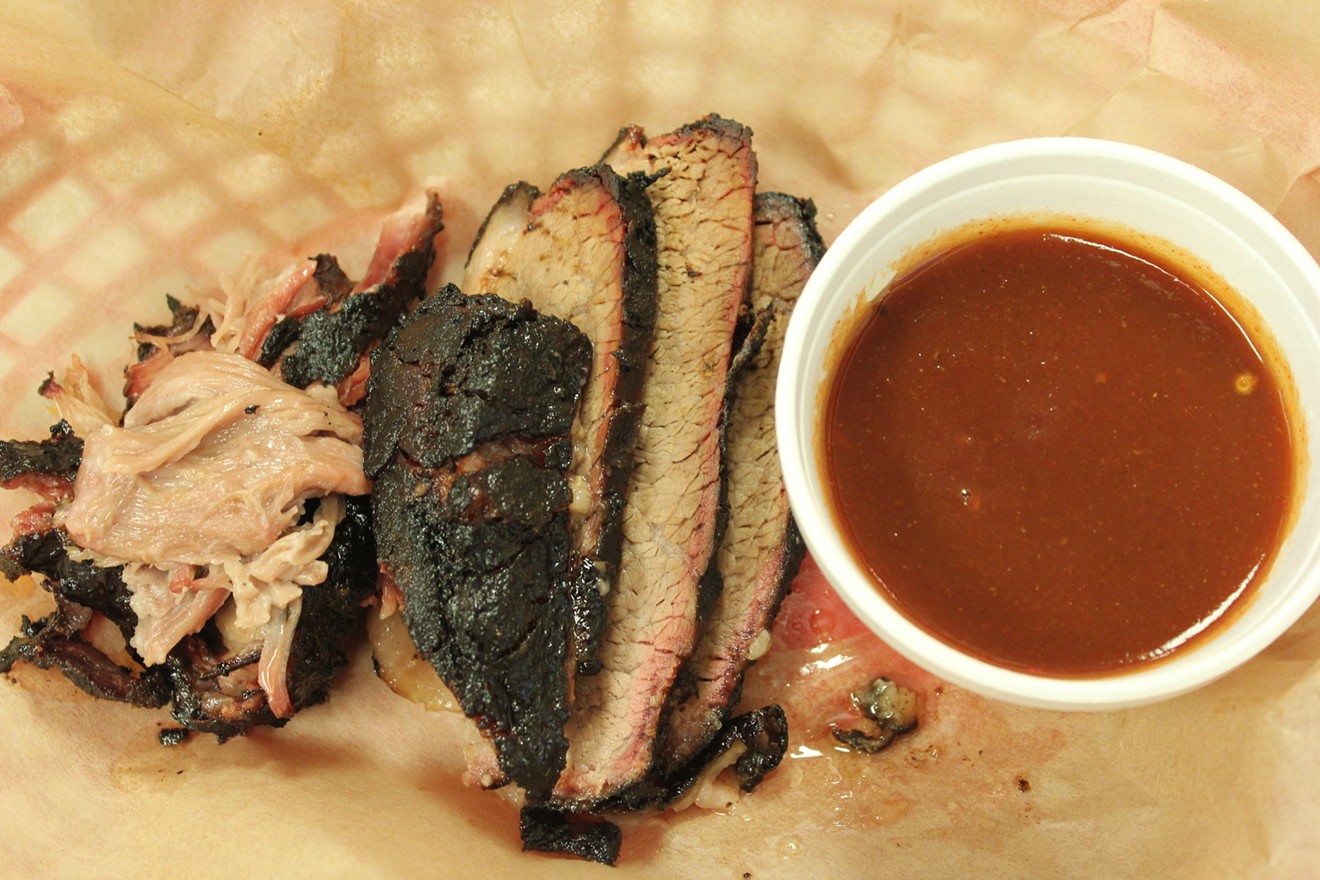 Left to right: pulled pork, burnt end, fatty/lean brisket. Chris Malloy
Long before he started smoking brisket, pork butt, ribs, and half-chickens in Cave Creek, Bryan Dooley studied at the Culinary Institute of America in Hyde Park, New York. Before he developed a tomato-based sauce with cider vinegar tang to cut the richness of brisket, he cooked for 13 years at the Fairmont Scottsdale Princess. Dooley knows classical technique and fine dining. And with his culinary chops, Dooley has chosen to make a living smoking meat — to barbecue.

“I’m not a pit boss,” Dooley insists. “I’m a chef who specializes in barbecue.”

His mastery of technique comes in on the edges. It shapes the outer flavors of Bryan’s Black Mountain Barbecue: the sauces, the sides, the non-barbecue dishes that depend on the likes of preserved lemon tartar sauce (for frog legs) or smoked tomato remoulade (for a fried artichoke po’ boy).

More distantly, Dooley's experience informs the core of what he does: smoke meat. It shapes his ‘cue on a faint and intangible level, giving him a feeling-based general competency that can't be reduced to specific culinary maneuvers or decisions.

“Barbecue is about smoking meat with fire,” Dooley says. “We don’t want to mess with that so much.” Bryan Dooley of Bryan's Black Mountain Barbecue.
Chris Malloy
Like his grandfather, an Alabaman who barbecued in a pit of “cement blocks and metal grates,” Dooley keeps ‘cue simple. He has to. Though he has sauced and sauteed, when the smoker gets hot, all Dooley has to work with is three elements: “meat, fire, and wood.”

He makes skillful use of this smoky trinity.

Dooley’s brisket has, sinking a half-inch below its bark, a florid crimson tinge. You can ask for brisket lean or fatty, and you’d be nuts not to mash down the pedal here. The fatty brisket has the usual butter-like dissolve of expertly slow-smoked meat. What sets this brisket apart is the delicate flavor of the fat. It tastes like beef but also has a nutty perfume and fleeting caramel and toasted notes.

Like Oren Hartmen of NakedQ in Scottsdale, Dooley aims for mild smoke that will let meat’s flavors sing. Dooley achieves this smoke by plugging pecan wood, always sourced from the same vendor, into the basic “meat, fire, and wood” equation.

Aaron Franklin, whose Franklin Barbecue (Austin, Texas) is considered one of the nation's best, waxes about wood in his book Franklin Barbecue. He makes a good point: “Wood is important for two functions: providing heat and supplying smoke.” The kind and age of wood will, given the simplicity of barbecue’s basic elements, have an outsize influence on brisket’s eventual taste. Smoke is a strange heat source. It isn’t the steady blue flame of a gas stove or an oven set to 350. Smoke cooks and flavors food.  Franklin advises barbecue acolytes to “approach your wood pile like a chef approaches his spice rack.”

That isn’t much of a leap for Dooley, fine dining vet, to make. Slicing against the grain to free a strip of lean(ish) brisket.
Chris Malloy
Dooley prefers pecan wood’s “nice soft smoke.” He finds hickory and mesquite too powerful. Mesquite produces the most pungent smoke of all the commonly used woods, nut tree woods and oak the least. Peach, apple, and other fruit woods impart, Franklin writes, “a gentle, rounded sweetness.”

It’s 100% pecan wood for Dooley. He gets cords from a supplier who sources from Native American land near the Salt River and down near Tucson. Arizona is known for its pecan wood. Pima County is one of the three largest pecan-producing counties in America.

The benefits of pecan wood can be tasted in Dooley's burnt ends.

Burnt ends are tougher bites from where the brisket tapers to awkward shapes and doesn’t allow for neat long slices. Dooley’s are as black as the space between two stars. Gnawing in, you expect the bitter explosion that comes with such a char. There is none.

Same with the pulled pork, smoked to heavy darkness. The bark yields to the tooth with a sticky, taffy-like chew with some crisp. Rocking especially hard are the single morsels with both bark and pink shreds of melting inner pork, which has a sweet, nutty flavor. The near-translucence of pecan smoke allows for these nuances.

Dooley smokes brisket and pork butts for 12 to 14 hours. As the smoker hums in the kitchen, John Wayne and western actors bluster on a projector screen in the dining room. Bryan’s seats 150 people. The joint is on Cave Creek Road, the western town’s main drag.

Two of the edges where Dooley’s training most shapes his 'cue are his rub and sauce. He uses one rub for his meat. It mixes more than 15 spices, including salt, pepper, garlic, chile powder, thyme, and ginger. His sauce is huge on tomato and tang. It's obscenely delicious, borderline drinkable, but his meat is better without. A pot of Dooley's tomato-based barbecue sauce. Brings a nice tang that cuts the fat of smoked meat.
Chris Malloy
Lamb shank and the occasional run of alligator spareribs are as fancy as his ‘cue gets. His style is less classical chef sieving sauces the same way chefs have for centuries and more simplified, in easy tune with a cooking method that stretches back millennia.

Cooking with smoke defies recipe. Pecan wood chopped a few days ago burns differently from wood laid away last year, and smokers have hot and cold spots just like grills. As Dooley’s approach hints, barbecue is more of an instinctive, go-by-feel-type, Jedi style of cooking.

“To me, barbecue is a feeling,” he says. “The feeling you get when you’re eating it. Barbecue comes in may different styles, but they all give you that same comfort feeling. That’s what we’re trying to pursue. It’s bigger than just throwing some meat over some coals, or over some wood.”