Pane Bianco. David B. Moore
THIRD OF A THREE-PART SERIES: The men and women who run some of Phoenix’s most popular restaurants let their food speak for itself, but the walls of their restaurant spaces can’t actually talk, so we asked each of these entrepreneurs for the stories behind the aesthetic of their restaurants. In the third installment of this series, we chat with Chris Bianco, who has put more thought into the chairs in his distinctly vintage spaces than most of us put into our retirement plans.

Chris Bianco is a chef and a philosopher — though not necessarily in that order.

His approach to food is simple, if metaphysical: Take a food — say, carrots — and ask yourself what is inherently special about it. What can you do to bring out the essence of the carrot, so that it is the best version of itself on a plate? If this sounds too ethereal for you, try a dish from any one of Bianco’s five Valley restaurants; the proof is in the proverbial pudding. 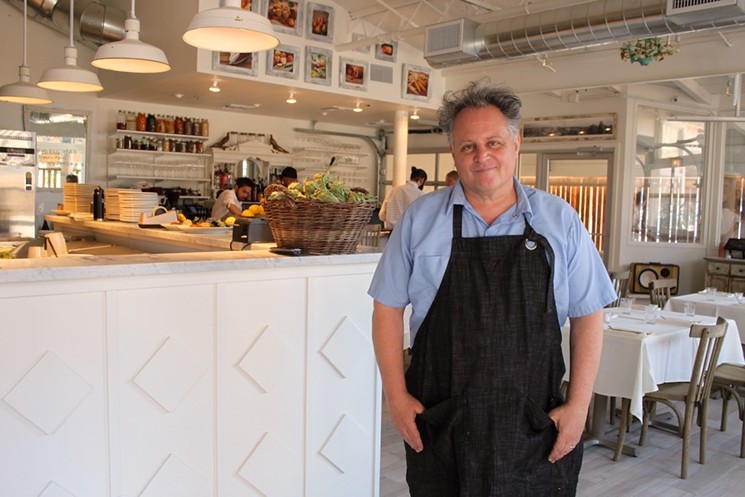 “Just do everything you can to make sure a place doesn’t suck,” Chris Bianco advises.
Lauren Saria
Bianco looks at restaurant design in much the same way. Pizzeria Bianco (there are two), Bar Bianco, Pane Bianco, and Tratto are all housed in buildings that predate the tenant; that is to say, none of Bianco’s restaurants are “new builds.” So with each one, Bianco had to take the existing space — whether it was a 1929 brick machine shop, or a former Mediterranean café in the well-worn Town & Country shopping center — and ask that space what it wanted to be.

“Seeing something cool doesn’t mean you need to own it, or replicate it,” says Bianco, as an interview about restaurant design turns to trendy restaurant concepts — the kind with more flash than substance. “You have to look at a space and ask what it wants to be, or look at a community and ask what it needs. Then, do the thing you like to do the best you can possibly do it. Seeing something you disagree with doesn’t mean you need to tear it down; it means you do your thing as well as you can to bring light to the darkness.”

Just when you think Bianco might be more monk than man, he follows this with: “Just do everything you can to make sure a place doesn’t suck.”

This refreshing practicality is quintessential Chris Bianco. A chair is just a chair, but when you’re sitting in it, it’s your chair. You need to be comfortable; otherwise, how will you concentrate on your conversation with your friend? Or taste the salty sweetness of the sausage on your pizza? He seeks to create spaces that will leave customers, as he puts it, “open to receive.”

The downtown Pizzeria Bianco in Heritage Square, near Seventh and Washington streets.
David B. Moore
And there is something consistently “Bianco-esque” about the aesthetic of each of his restaurants. The patina, maybe? Bianco loves antiques, and furniture that has a story. Lighting is crucial: Each restaurant is flooded with natural light and fixtures that are set to the perfect warm glow in the evenings. And even the busy locations (like Pane Bianco, which is next door to popular coffeehouse Lux; or Pizzeria Bianco and Tratto, neighbors in Town & Country) feel intimate and private. Dark tinting on windows, or wooden fencing made with turning slats, ensure that patrons can see out, but passersby cannot see in.

The aesthetic in each restaurant feels unique to that location, however, perhaps because of Bianco’s authentic, practical approach. Take Tratto, for example. Its color palette is made up of soft whites — from the walls, to the linen tablecloths to the ashy porcelain tile throughout the restaurant. As the priciest option in Bianco’s portfolio, one could argue that white makes the place feel more formal. Chef Robbie Tutlewski laughs and says there are simply no other Bianco restaurants that could pull off an all-white look.

“Pizza sauce is red,” he says. “And it gets everywhere.”

But a deeper truth is never far from Bianco’s practicality. For Tratto, Bianco drew inspiration from time spent in London (at one point he was making the trip monthly, working on a restaurant concept with Jamie Oliver). He fell in love with muted English sunlight, so very different from our own in the desert, and buildings whose layers of paint were centuries old.

“There is a time to sandblast the walls and expose the brick, like in the original Pizzeria Bianco,” Bianco says. “And there is a time to put layers over layers of paint, and that’s okay, too.”

Chris Bianco's Tratto is adjacent to his Town & Country pizzeria.
David B. Moore
Tutlewski likes to say that Tratto is the same as all the other restaurants, but with more attention to detail. Tratto zeros in on what time or expense prohibits in Bianco’s other kitchens, whether it’s an ingredient, a bottle of wine, or a style of cooking. The aesthetic gets the same treatment. Perhaps no anecdote illustrates this as clearly as when the frames arrived for the restaurant’s oil paintings. Bianco’s father, a skilled painter, had created a dozen or so still-lifes of fruits and vegetables that you’d find at the farmers’ market, and, in keeping with the color palette, Bianco had ordered white frames for the artwork. But when they hung the bright white frames on the plain white walls, something didn’t look quite right.

The Town & Country Pizzeria Bianco is on 20th Street just south of Camelback Road.
David B. Moore
Hold on, said Bianco, and he charged out of the restaurant and into Pizzeria Bianco next door. Bianco returned to Tratto moments later, having pressed his hands into the cinders of the pizza oven. Sitting down with a painting, he carefully rubbed a thin layer of soot around the stark white frame, until the ashes of countless loaves of bread, roasted vegetables, and pizza pies surrounded the painting his father had created.

It was a move only an artist, or maybe only a pizzaiolo, would make.